Inventor Flies Hoverboard High and Fast Over The Atlantic

The guy who invents some of the coolest toys in the world is showing off his latest and it should make a lot of people stop saving for retirement and start mining bitcoin for one of them. Franky Zapata, founder and CEO of Zapata Racing, recently demonstrated the latest version of his record-breaking Flyboard Air hoverboard in a high, fast and acrobatic test over the Atlantic Ocean off the coast of France. While the video of the test has potential buyers salivating into their bitcoin wallets, the Flyboard Air may ironically be banned in the country where Zapata is headquartered and where the test took place.

Creating, innovating and never giving up are the values which have helped me fulfill my craziest dreams.

It’s been almost a year since Zapata the inventor and hoverboard pilot set a world record by riding a Flyboard Air for over 2.2 kilometers (1.4 miles) at an altitude of 50 meters. The latest version demonstrated in mid-March pushes the “Independent Propulsion Unit” closer to its top speed of 93mph (150 km/h) and maximum airborne limit of 10 minutes. Rather than just flying in a straight line as in the record-setting attempt, this test shows Zapata making turns, accelerating, stopping and just plain having a great time on his great invention.

Unfortunately, that may have been the last time Zapata flies the Flyboard Air in France due to the word that all inventors and entrepreneurs dread to hear … regulations.

According to reports, the prosecutor’s office in Aix-en-Provence has opened a preliminary investigation into Zapata for “failure to comply with the minimum rules for overflight and operation of an aircraft without the necessary qualifications.” Until the investigation is completed, the Flyboard Air is grounded in France, no matter whose feet are in the boots. 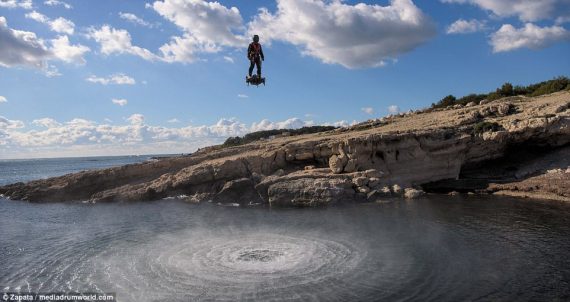 People were troubled by flights over bridges or close to inhabited areas in Martigues, with an engine that propels a jet of air down, a few meters from the ground with a lot of noise.

Vice prosecutor Emmanuel Merlin warns that will face severe fines and possible jail time for flying an “unlicensed aircraft above an urban area, using an engine that had not been approved for flight.” 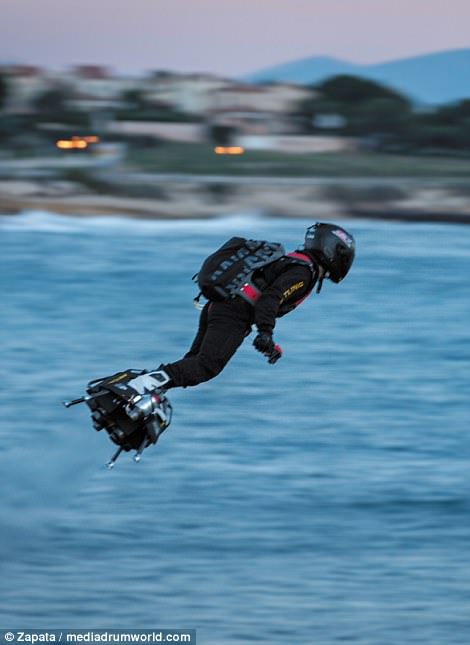 It sounds like Zapata’s business plan called for asking for forgiveness instead of asking for permission, or in this case, getting government approval for the Independent Propulsion Unit.

That is how innovators are treated in our country. I leave you [to] imagine my disgust after having produced more than 10,000 ‘made in France’ Flyboards. I'm going to be forced with the greatest regrets of certainly leaving France.

Franky Zapata posted that in French on his Facebook page after receiving the news. The 10,000 Flyboards he’s referring to are the tethered airborne jetskis which are seen in waters around the world and are the crafts that Flyboard Air pilots will be trained on before going unchained. 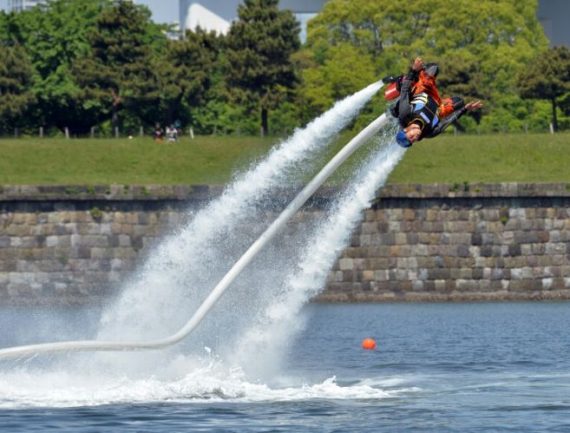 As expected, Zapata has the support of the public (at least the public living where they can’t hear the engine's roar or feel its jet draft blowing down) and should have no trouble finding a new headquarters where the Flyboard Air will eventually be marketed from. As the website Contrepoints puts it:

When an invention sees the light of day, the Americans merchandize it, the Chinese copy it, the Europeans regulate it, and the French ban it.

Step four has been completed.