Jeff Bezos Leaves Bathrooms and Barf Bags Off of Spaceship

Since the dawn of space travel, one of the greatest technical challenges facing rocket engineers has been the problem of dealing with human waste. There’s the legendary transcript of Apollo 10’s commander Tom Stafford dealing with a weightless floater.

Oh—who did it? Who did it? Give me a napkin quick. There’s a turd floating through the air.

Things have improved with vacuum toilets and sophisticated plumbing systems inside spacesuits. However, if you’re paying around $250,000 for a trip in a luxury space vehicle built by a private space company owned by one of the world’s richest men, you would think there would be luxury bathroom accommodations on board.

You would be wrong. 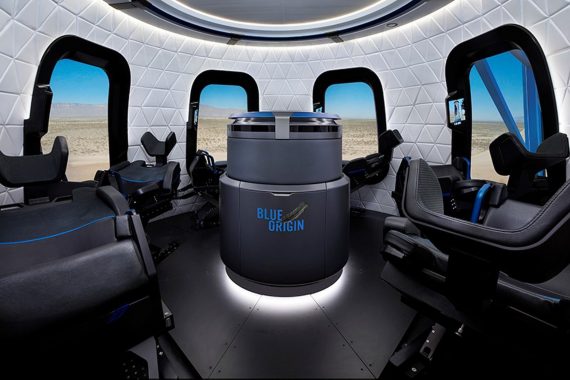 Go to the bathroom in advance.

At the 33rd annual Space Symposium held recently in Colorado, Blue Origin founder and CEO Jeff Bezos revealed that his space tourism vehicle New Shepard will not be equipped with any bathroom facilities for those needing to do #1, #2 or hug the porcelain for a motion-induced puke. In fact, Bezos said he won’t even provide barf bags. Did this guy work for Amazon or United?

Of course they’re not going to worry about it. The New Shepard is fully autonomous – the passengers will be traveling by themselves without a pilot, flight attendant or any other Blue Origin employee on board. What’s going to stop a passenger who needs to go from doing their business in a corner and then covering it up with pages from the in-flight magazine … assuming that cheap &$%@# Bezos hasn’t cut those out too?

According to Rob Meyerson, president of Blue Origin, the small amount of training the passengers will go through – how to strap in, how to unbuckle, where the window is, where the panic button is -- will include “etiquette” for the weightless environment. Really? Has he seen how people act when the lines are too long at concerts?

How much are these poor poopless people paying for the privilege to fly 62 miles (100 km) above the surface of the Earth for 11 minutes just to weightlessly see the curve of the planet and the darkness of space? Private spaceflight competitor Virgin Galactic is selling tickets for its first flights on SpaceShipTwo for up to $250,000 apiece. Perhaps Bezos will offer a discount for Amazon Prime customers.