Jimi Hendrix’s Ghost and His UFO and Alien Encounters

A statue of Jimi Hendrix on the Isle of Wight – the island where the rock-and-roll legend performed his last concert just before his death in 1970 – drew criticism when it was erected in 2006. Now it may be drawing something else – Jimi’s ghost. A report claims a local resident has been hearing Jimi’s music in the area around the statue. Is there an explanation or has the world’s most haunted island attracted another ghost? Could it be linked to Hendrix’s UFO sightings or rumors that he himself was an alien? You mean you didn’t know that?

Barely a night goes by when we aren’t serenaded by the spirit of Jimi and his famed guitar," he said. Just as I nod off it starts. If it’s not Purple Haze it’s All Along the Watchtower in all their psychedelic glory.

Isle of Wight County Press Online reported that Joe Heydon heard the unexplained music around the bronze statue, which many locals hate because it conflicts with the Victorian looks of the house it stands in front of. The site reported that paranormal investigators had been notified and local haunted tour guide Marc Tuckey was on the case.

I’ve been hearing tales of these Hendrix performances for several weeks. I would love to experience one of his shows for myself. The West Wight area of the Island is renowned worldwide for its ghosts, spirits, poltergeists and apparitions. 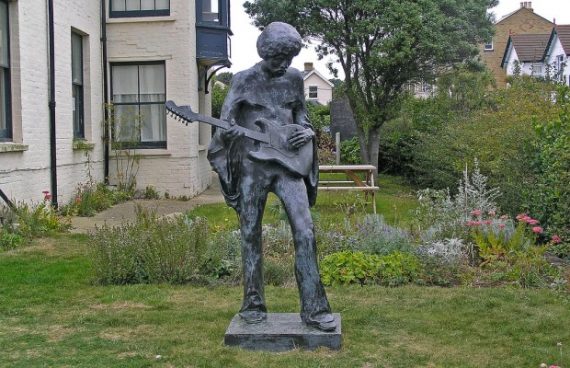 However, one last quote from an amateur ghost hunter named Flora Pilo gave a hint that there was more to this story. Unscramble the letters and the name becomes April Fool and a quick check at the date of the article confirms what the site later admitted.

That’s too bad because what makes the story so believable – in addition to the island’s ghost activity – is that Jimi Hendrix was in real life one seriously paranormal dude.

There are other people in the solar system, you know, and they have the same feelings too,not necessarily bad feelings, but see, it upsets their way of living for instance - and they are a whole lot heavier than we are.

Hendrix was open about his UFO sightings and belief in aliens and once told a New York Times reporter that he himself was from Mars. Farfetched? Drug talk? Concert-goers may disagree, especially those at one of his last concerts performed at an extinct volcano in Maui. Between the three sets, while Jimi rested in a special Hopi tent, many attendees reported seeing UFOs and hearing music coming from rocks.

That story was confirmed by Curtis Knight – before hitting it big, Jimi was a member of Curtis Knight and the Squires – and Knight told of another UFO encounter near Woodstock, New York, in 1965 when the band became trapped in their car during a heavy snowstorm. He claimed a UFO landed in front of them, an alien appeared and the snow suddenly melted and the car became hot, saving them from freezing and freeing the car. While Jimi rarely talked about it, his songs may have. Here’s a line from “Somewhere” off of First Rays of the New Rising Sun, a 1997 posthumous album of unreleased songs.

And up in the clouds I can imagine UFOs chuckle to themselves, ‘Heh heh’ / Laughing, they saying, ‘Those people so uptight, they sure know how to make a mess, hey!'

Hendrix also mentioned a ghost sighting of his own. He once lived next door to the Handel House in London and reported seeing a ghost, possibly  of fellow music great, George Frideric Handel.

Jimi Hendrix obviously had some paranormal connections. Maybe this statue thing will convince his real ghost to come back and set things straight.