Remains of a 3,700-Year-Old Pyramid Discovered in Egypt

It almost seems like you can’t throw a stone or a chunk of solidified camel dung in an Egyptian desert without hitting a pyramid, yet new ones continue to be found. The latest is just a portion of a 3,700-year-old pyramid in the Dahshur Necropolis south of Cairo but it may hold information as to why this and other later pyramids did not hold up as well as the earlier ones.

Mahmoud Afifi, head of the ancient Egyptian antiquities sector in the country’s antiquities ministry, made the announcement of the discovery of the pyramid’s site this week. The Dahshur Necropolis is located on the Nile’s west bank about 40 km (25 mi.) from Cairo. It is significant to pyramid study because it contains two of the oldest and best preserved – the Bent Pyramid and the Red Pyramid – built from 2613–2589 BCE during the reign of King Sneferu, who is believed to be buried in the Red Pyramid.

The Bent Pyramid gets its name from the “bend” inward the sides take about halfway up. This was the first try by the 4th Dynasty Pharaoh Sneferu at building a smooth-sided pyramid and it taught him some valuable lessons. The base was built on desert gravel and clay which offered poor support. The foundation flaw added to the problem of the lower blocks being cut so that their weight pushes to the center, requiring the design change that resulted in the bend.

Sneferu fixed some of the problems in the Red Pyramid, so named for its lean to the right. Just kidding – it was made with red limestone. The 105 meter (344 ft) Red (also called the North Pyramid) was the first true smooth-sided pyramid. Sitting at Sneferu’s knee during the construction was young Khufu, who took notes and used what he learned to build the 490-foot Great Pyramid of Giza.

The newly discovered partial pyramid is from the later 13th Dynasty which lasted from 1803-1649 BCE. What has been excavated so far is a corridor into the inside, a hall leading to a southern ramp and a room on the west side. Pieces include a granite beam and stone blocks which give some idea of the interior design. Most interesting is a 15 cm by 17 cm (6 in by 6.7 in) block engraved with hieroglyphics that are currently being deciphered. They may help identify this pyramid’s builder. 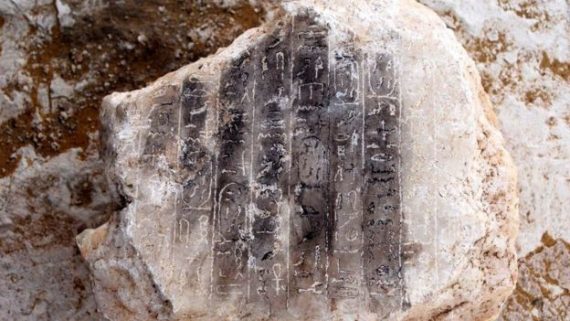 Other pyramids from the 13th Dynasty in the Dahshur Necropolis include the badly damaged pyramid of Amenemhat II and the badly damaged (is there a pattern here?) Black Pyramid. Perhaps the hieroglyphics found in the new dig can explain their downfalls as well.

Why didn’t these newer structures last as along as the earlier Dahshur pyramids? Did the pharaohs lose patience in waiting for quality construction? Did the workers finally figure out that they were in dead-end jobs?

Or perhaps someone spilled Egyptian coffee on the blueprints left by the aliens who helped build the first ones.