If you’re immortal, however, these distances become far less daunting. That journey will be made by robots, not us.

Is the “journey” Royal Astronomer Sir Martin Rees is referring to the trip to other galaxies or the trip to the next century? Unfortunately, it may be both. In a new interview, the Emeritus Professor of Cosmology and Astrophysics at the University of Cambridge, Astronomer Royal, member of Britain’s House of Lords and former President of the Royal Society (when you’ve got a resume like that, you deserve to brag), Sir Rees reveals his prediction for a robot uprising that will soon replace all humans on Earth before moving to other planets and galaxies where they will probably encounter more mechanical beings like themselves.

If we look at our history on Earth, it has taken about 4 billion years to get from the first protozoa to our current, technological civilisation. But if we look into the future, then it’s quite likely that within a few centuries, machines will have taken over – and they will then have billions of years ahead of them.

Sir Rees describes the era of humans as “just a thin sliver between early life and the long era of the machines” and predicts that life on other planets is unlikely to be at the same stage of development that we are. He sees the possibilities ranging from simple life forms to “an already fully electronic intelligence.” Unfortunately, he sees humans being “fixed to this world” and doesn’t envision our species meeting with these life forms on other planets because we’ll be unable to survive such long journeys or we’ll already be replaced by robots.

A more likely scenario is that these life forms visit Earth instead. What will that be like, Sir Rees?

It would certainly make the universe more interesting, but it would also make us less unique. The question is whether it would provoke in us any sense of cosmic modesty.

Cosmic modesty? In humans? That’s a good one, Sir Rees.

He predicts that humans will have a difficult time just making it to the next century and technology is one big reason. Specifically, an error in designing powerful technology – especially biotechnology – or a misuse – intentional or accidental -- makes us “more vulnerable as a species than at any time in our past.” That “bio” part means the biological consequences of this dangerous biotechnology will affect humans but not technology ... the robots and artificial intelligence will survive and take over. 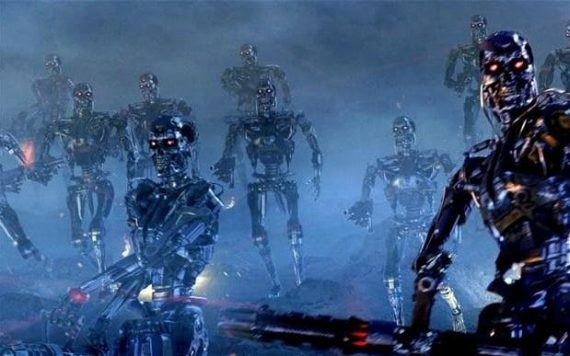 Rees sees humans hastening their demise due to the expanding carbon footprint that’s causing climate change coupled with a lack of long-term thinking. Humans no longer seem to be able to conceive and create undertakings that will not be finished in their lifetime – like the great cathedrals of Europe or even the space projects that sent the Voyager probes out of the solar system. While he says he has no religious beliefs, he hopes that humans can follow organizations and people with long-term visions on climate change like the Catholic Church and Pope Francis with his 2015 Papal Encyclical.

That’s especially critical if Earth contains the only life in the universe. Sir Rees describes the consequences of that:

… we’d know more certainly that this small planet really is the one special place, the single pale, blue dot where life has emerged. That would make what happens to it not just of global significance, but an issue of galactic importance, too.

Do we want to leave a better world for our children’s children or for robots?

Terrifying Brain Slug Parasites Are On the Rise