We are not creating a Terminator, but artificial intelligence that will be of great practical significance in various fields.

If you start by saying that you’re not building a Terminator, you shouldn’t be surprised when everyone thinks you’re hiding the fact that you’re building a Terminator … especially if you’re Russian Deputy Prime Minister Dmitry Rogozin tweeting (yes, Russian leaders tweet too) about a video of FEDOR, a humanoid robot capable of accurately firing automatic weapons with both hands. This can’t be good news.

FEDOR stands for Final Experimental Demonstration Object Research, a somewhat scary name (Final what?) for a humanoid robot developed by Android Technics and the Advanced Research Fund for the Russian space program. In 2021, FEDOR will be the sole passenger on Russia’s planned new spacecraft, the Federatsiya. Fedor and Federatsiya sound like the names of a happy Russian couple but Federatsiya is actually the long-awaited replacement for the workhorse Soyuz capsule that dates back to the 1960s.

So, why does a robot spaceship pilot need to be able to fire guns with both hands? Deputy Prime Minister Rogozin tweets again:

Robot FEDOR showed the ability to shoot from both hands. Fine motor skills and decision-making algorithms are still being improved. Shooting exercises is a method of teaching the robot to set priorities and make instant decisions. 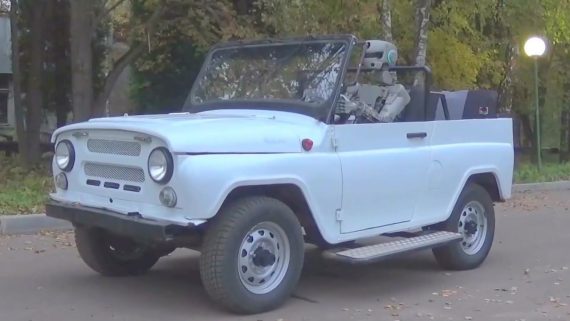 Why keep going back to the guns, Dmitry? FEDOR can also drive a car that it started on its own with a key, use various tools, screw in a light bulb (before you ask, it takes two FEDORs to screw in a light bulb … one to turn the bulb and one to kill anyone who tries to stop it) and do pushups. These skills are promoted as beneficial for FEDOR’s other job as a rescue robot for extreme conditions. 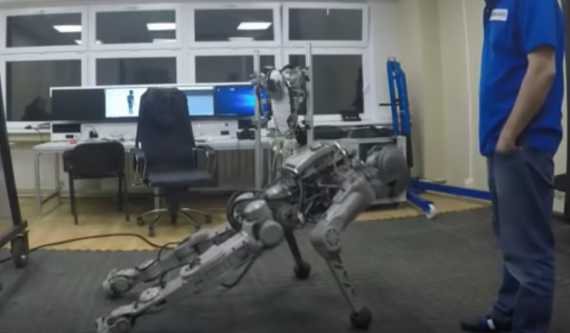 Our involvement in the FEDOR-based space robot project will bring us to the next level in the development of robotic technologies.

What might that next level be? Here’s what the Android Technics CEO sees:.

The self-learning procedure is not incorporated in the model, which is now being demonstrated. In the future, it will necessarily appear because self-learning is a major direction of the development of autonomous robotics.

A self-learning robot with guns in both hands. This can’t be good news.

We are not creating a Terminator. 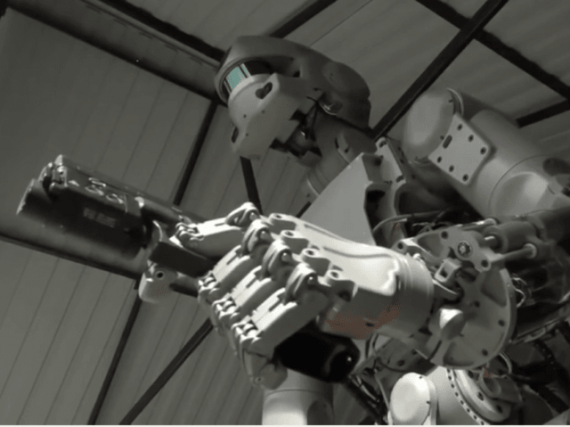