How do you know if you’re looking at a shape-shifter? If the creature is in human form, you either have to wait or take the word of the police officers who captured it when it changed from half-human-half-duck into a small human. If you ask them why no one took a picture of the half-human-half-duck, they’d probably point out that everyone knows you can’t take a picture of a shape-shifter until it’s in human form, which is what they did. If you don’t believe them, perhaps the stories of a hunter who shot it or a farmer who was attacked by it will convince you. If you’re in Ghana, those options make sense because you’ve heard many stories of shape-shifting cryptids. If you’re not in Ghana, the story was posted on social media, so it must be true … right?

This strange story comes from the Nigerian website naij.com and is allegedly confirmed by Sikah Bersah, a member of the National Service personnel in the Volta region of Ghana. He said that residents of the Ketu South Municipality of the Volta region had reported that their pigs, cows, chickens and other livestock were being mysteriously killed by something that eats the intestines and internal organs and leaves the rest of the carcass. Sounds like a wild dog or a scavenging animal … except witnesses claimed it was a human that changed into a pig and chased them before disappearing.

Last week, a hunter claimed to have seen the creature shift from human to animal (no description of what kind) and he shot it … which caused the creature to unfold wings and fly away. It was soon seen in nearby village of Afife, where a farmer claimed it attacked him. Fortunately, the farmer recited a magic incantation and the creature reverted to human form, but wouldn’t leave his farm. He called for help and his neighbors convinced a young boy (nice neighbors) to go in with some magic herbs and catch the creature. This seems to be where the police arrived and, after seeing the creature change from half-human-half-duck to a small human, captured it and took the pictures for social media. 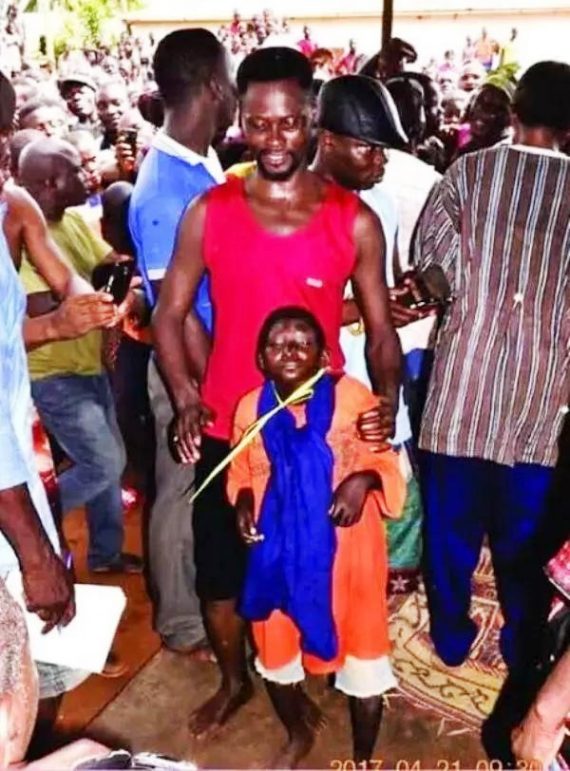 The alleged shape-shifter in the pictures looks like a young boy or a small man and no one seems to be afraid of him. Unfortunately, the report ends without any indication as to the fate of the boy/man/shape-shifter. Is the whole thing a hoax? Is this another case of humans fearing or blaming someone who’s ‘different’? That may be the case. But …

There are stories in Ghana told by the Ashanti people of the Sassabonsam or Asabonsam, which is a giant bat-like cryptid with the head of a fox, iron teeth and iron hooks on its feet and wings that are used to carry away humans. It’s sometimes described as a tall, thin, bearded blood-sucking human with red eyes and feet that point in both directions. That’s scary in either form, but neither matches the alleged shape-shifter in the photo.

The Ewe people of Ghana tell tales of the Adze, which is also a vampire-like cryptid that eats organs. Now we’re getting somewhere … wings, eats organs, lives in Ghana and it’s a shape-shifter. However, the other form the Adze changes to is a firefly – a blood-sucking firefly that prefers children, spreads diseases and turns its victims into witches.

Perhaps it’s a lost Tikoloshe, which the Zulu people of south Africa believe is an evil dwarf-like water sprite that becomes invisible by drinking water and has been described in other forms, including a bear-like humanoid. The Tikoloshe is often blamed for mysterious deaths at night which are more likely due to poor ventilation in houses heated with burning animal dung.

None of these cryptids match the one described by Sikah Bersah, which probably means the story is a fake or the poor small sperson in the photo is an ‘other’ being blamed for something that people can’t explain or don’t want to be responsible for.