Strange Lights and Clouds Over the Philippines and Norway

Where did she go? If she’s in Pagadian City in the Philippines, she got her camera and photographed a strange phenomenon in the bright afternoon sky that she called a “unicorn rainbow.” If she’s in Norway, she’s a scientist who photographed a glowing and hovering ball that she presented at a conference as solid evidence of a Hessdalen UFO. Unicorn rainbow? Hessdalen UFO? It’s enough to make Paul and Ringo get back to the studio.

It was amazing. It looked like a magical kind of phenomenon. I've never seen anything like it before. It wasn't in the sky for long. So I was lucky to be able to record it. Certainly, it has made a lot of people happy to look at it.

Anne Salikala is a nurse but that description would make a great song lyric. She spotted the multicolored cloud over Pagadian City on April 23rd and, while it takes some imagination to see a ‘unicorn’, it’s definitely unusual. Meteorologists who saw it say it’s indeed a rainbow formed around a cloud by a combination of water droplets, heat, humidity and sunlight called cloud iridescence. 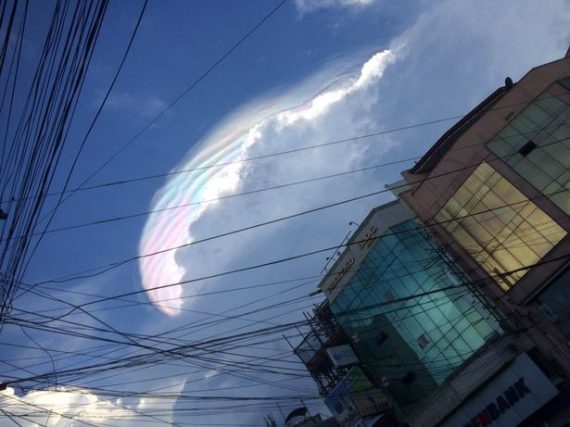 So it’s not a unicorn, nor is it a fire rainbow. That phenomenon – which is neither fire-related nor a rainbow – is a circumhorizontal arc or ice halo formed by ice crystals suspended in the atmosphere and refracting sunlight or sometimes moonlight. When only fragments of the halo are seen, fertile imaginations see fire and rainbows and probably unicorns.

Hessdalen UFO sounds more interesting. In this case, the girl with the sun in her eyes is Anna-Lena Kjøriksen, a researcher at Norway’s Østfold University College. While looking at a computer screen monitoring automatic field cameras pointed at Hessdalen valley, she and her colleagues spotted a ball of light about 100 meters away and hovering 30 meters above the ground. Despite dropping everything and rushing outside, the phenomenon was already gone. 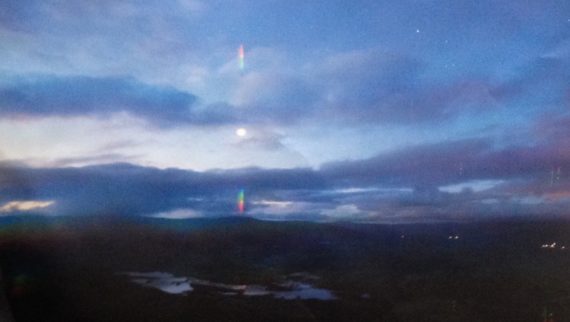 Anna-Lena and her colleagues believe the ball of light (the colors in the image are from the spectra camera) was a Hessdalen UFO or Hessdalen Phenomenon – an unexplained nocturnal light seen only over the 12 km (7.5-mile) long Hessdalen valley in central Norway. It’s so rare and somewhat controversial that the researchers sat on the photo since September 2015. After eliminating all other possible explanations, they finally unveiled it recently at a geological congress for the European Geosciences Union in Vienna as a 95% certain photograph of a Hessdalen Phenomenon or UAP – Unidentified Aerial Phenomenon (they shy away from Hessdalen UFO since it’s not technically flying).

Now that they have a photo, can they figure out what it is? Not really. It could be some strange combustion of the rare element scandium -- Hessdalen valley contains large deposits. It could be piezoelectricity --- electricity generated by crystal rocks. It could be plasma. Or cosmic rays. Or a mirage. Or aliens.

It’s definitely not a unicorn. Or flowers that grow so incredibly high