The Lizard Men of Costa Rica Carry on Bizarre Tradition

No matter what you guess the Lizard Men of Costa Rica do, you’d probably be wrong. Add the big hint that “They do it on Easter Sunday,” and your guess will probably be even further from reality. While the rest of the Easter celebrating world spends part of the day searching for eggs, the Easter tradition of the Lizard Men of Ortega, Costa Rica, involves jumping to a deep river and searching for a large crocodile to catch and bring to shore. Really! Wouldn’t catching turtles with shells be a little closer to an Easter egg hunt?

“Passion” obviously means something different to the rest of the Easter celebrators, especially on Good Friday, but to Carlos Alberto Cascante it means joining the ‘Lagarteros de Ortega’, or Lizard men of Ortega, in the Tempisque River or one of its tributaries for the 200-year-old celebration known as Lagarteada. The men wade into the water up to their necks in search of a crocodile or a caiman – a crocodilian reptile that the locals refer to as a ‘lizard’. Once a suitable lizard is spotted, they hit the water’s surface with sticks or their hands to drive it into a net. The captured lizard is then carried to the center of Ortega and placed in a pool, where it stays until Easter Sunday when the Lagarteros de Ortega release it back into the river. 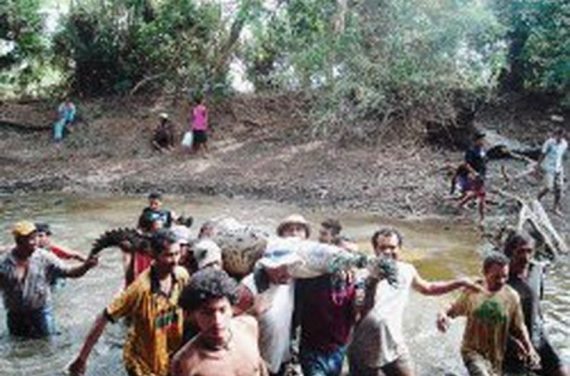 That’s the cry of the lizard, which is glad it wasn’t captured when this tradition first began. Crocodiles and caimans were sacred and magical symbols of fertility and the land to the pre-Hispanic cultures of Costa Rica, including the local Chorotegas. In those days, the lizard was captured in the spring and sacrificed and its parts – especially the fat – were used in traditional medicines. After the Spanish Conquest, Lagarteada was preserved as part of the Christian Easter celebration – also in the spring – and loosely connected to the crucifixion.

In modern times, both the Catholic Church and the Mesoamerican tradition are superseded by animal rights activists, the Costa Rican Ministry of Environment and Energy , the Red Cross, the Public Force and others, who make sure the proper permits are obtained and no lizards are harmed in the making of the Lagarteada. Since this is Costa Rica – home of manly men who still participate in bull rides and bull runs – their safety is their own responsibility and the Red Cross is there simply to bandage their bite wounds.

This time everyone could tell how hard it was. The people saw it in the river in the net, they saw how we had to fight with the animal in order to get it here.

Lizard Man Jaime Sanchez brags about how much tougher this tradition is than hunting for hard-boiled eggs, which have about as much in common with the true meaning of Easter as the Lagarteros de Ortega and their lizard hunt. 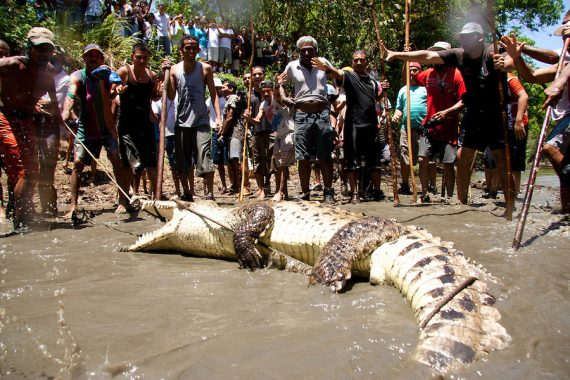