The Man Who Laughs: Into The Eerie Origins of The World’s Most Famous Super Villain

He is, arguably, the most recognizable villain in comic book history: a gaunt, pallid face topped with electric green hair and a rictus grin outlined in crimson, his brand of villainy relies on no superpowers other than an unrivaled criminal insanity.

He is The Joker, the "Clown Prince" of crime.

Notable for being one of the most popular characters in the DC comics universe, he is the arch-enemy of Batman, and ranks near the top of virtually every roundup of greatest villains of all time. And, just as every famous fictional character has a grain of truth to their origins, the inspirations that lay behind The Joker are unique indeed. 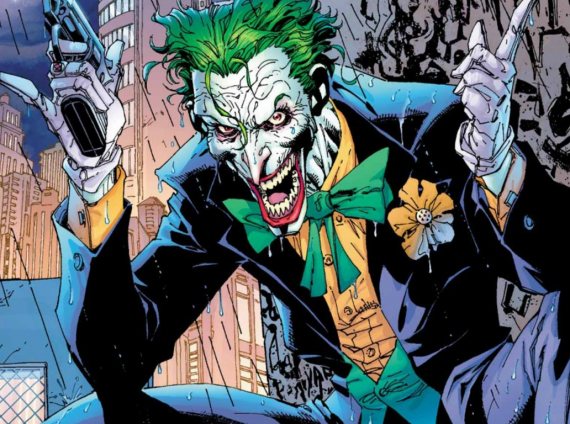 In fact, the earliest inspiration for what became DC Comics' most popular villain was rooted in a famous, and very eerie photograph.

It was 1923, and Universal Pictures’s screen adaptation of Victor Hugo’s classic The Hunchback of Notre Dame had stoked the fires of the film industry. The film's lead star, Lon Chaney, would become known as "The Man of a Thousand Faces" for his seemingly effortless transitions between grotesque on-screen roles, and following the Hunchback success story, Universal had its sights on its next big blockbuster. After much discussion and coordination, an adaptation of Gaston Leroux's The Phantom of the Opera was presented before the company's executives, and quickly shot down (ironically, we might add, considering the later success of the eventual film rendition). Seeking an alternative, writers looked once again to Victor Hugo's works for possible inspiration, settling on a less popular, though no-less intriguing story, The Man Who Laughs.

The story wasn't only less popular that The Phantom of the Opera, in fact. The Man Who Laughs had been widely criticized at the time of its release five decades earlier, reviewed as one of the author's least successful novels. Still, this hadn't prevented screen renditions of the story from appearing, and by the time Universal Pictures had turned their attention to the story, two film adaptations had already been made, one in France (1908) and another in Germany (1921) under the title Das grinsende Gesicht.

Chaney, due to his versatility, was of course offered the role of the film's lead role, Gwynplaine. However, Universal Pictures soon reached an impasse upon realization that they had failed to acquire the rights to production of the film from the previous French company. As production stalled, Lon Chaney's contract was amended, thus allowing him release from the role, in addition to first choice in his next role to be. The rest, as they say, was history, and production on The Phantom of the Opera ensued. Upon its release in November 1925, the film's famous "unmasking" scene has been widely regarded as one of the scariest of its time, causing moviegoers to gasp and, in some cases, even faint. Despite this, reviews of the film were lukewarm, at best, although it was largely a commercial success.

Once Phantom had been seen through to completion, studio chief Carl Laemmle was eager to move on to production of Universal's next success, and with proper acquisition of the rights to The Man Who Laughs now in order, production began on the film. There was one slight change, however: Lon Chaney was no longer cast as the Gwynplaine, the studio having instead selected a unique and vibrant foreign actor for the role, Conrad Veidt.

Veidt had seen previous success for his role in the silent film The Cabinet of Dr. Caligari, and earlier in his career had been among the most well-regarded German actors prior to leaving Germany once the Nazis came into power. An almost unprecedented $1,000,000 went into making the film, and The Man Who Laughs premiered on April 27, 1928, in New York City. Though successful like its predecessor Phantom of the Opera, it received similar lackluster reviews.

The obvious highlight of the film had been actor Conrad Veidt's portrayal of Gwynplaine, who according to Hugo's story, had been awarded a grisly facial disfigurement during childhood akin to a "Glasgow smile", so that, in the words of his attacker, he will "laugh forever at his fool of a father." The permanent grin leads Gwynplaine to later become a carnival sideshow star known as "The Laughing Man."

It must be obvious at this point how Veidt's portrayal of Gwynplaine, "The Laughing Man", had likely influenced Bob Kane, Jerry Robinson and Bill Finger back in DC Comic's Golden Era, when they created the maniacal Joker character (initially conceived as being a one-off villain, but who was "resurrected" from an accidental stabbing at what would have been the conclusion of his first, and presumably only appearance). The similarities are obvious, most notably dealing with the permanent grin worn by both Gwynplaine and The Joker. Which brings us to that eerie photograph we mentioned earlier... 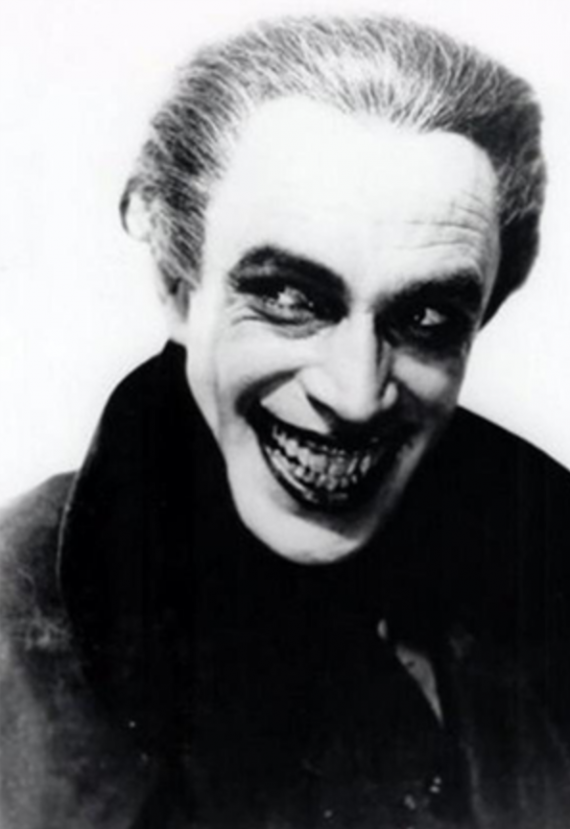 This very striking image (the most famous of Veidt in his portrayal of Gwynplaine) became the final word on the eventual appearance of Batman's arch nemesis, although the concept for the character did apparently come earlier. Artist Jerry Robinson had wanted to create an "exotic" villain that would be capable of more than merely fighting Batman, and instead would push his limits in both physical and psychological ways, citing the similar relationship between the Great Detective Sherlock Holmes and his arch nemesis, Dr. James Moriarty. Initial sketches of The Joker character were perceived as somewhat lacking by Kane and Finger, the latter of which showed Robinson the ghastly image of Veidt seen above, displaying Gwynplaine's trademark rictus grin (a technical term for a fixed smile, sustained resulting from muscular spasm).

Kane, on the other hand, differs on Robinson's story, saying in a 1994 interview that, "Bill Finger had a book with a photograph of Conrad Veidt and showed it to me and said, 'Here's the Joker'. Jerry Robinson had absolutely nothing to do with it, but he'll always say he created it till he dies. He brought in a playing card, which we used for a couple of issues for (the Joker) to use as his playing card."

Whatever the character's true origins may have been, it is agreed that the reason for The Joker's grin, according to his DC Comics history, involved having fallen into a vat of chemicals during a confrontation with Batman earlier in his career (at that time, the character, whose name is believed to have been Jack Napier, had been known as "The Red Hood"). However, the character's portrayal by Heath Ledger in Christopher Nolan's The Dark Knight (2008) bore more similarities to Gwynplaine, which included Ledger's Joker sporting a Glasgow smile beneath his smudged clown makeup.

Although The Man Who Laughs may not have shared the same long-term success as Batman comics and their famous villain, Conrad Veidt's maniacal rictus grin will forever hold a special place in the history of comic fandom.