The Mysterious Death of the Man From Nowhere

Some mysterious deaths seem doomed to be forever unsolved. Littered with baffling, often bizarre clues that seem to only deepen the mystery, these cases have embedded themselves into the world of the strange. One such mystery concerns a mysterious man with no known identity who seemingly came from nowhere, to die alone and leave a trail of oddness and questions that continue to perplex to this day, catapulting it to its place as one of the weirdest and most debated cold cases there is.

On Friday, September 14, 2001, at around 4:30PM, a tall, casually well dressed young man walked into a rural motel at Amanda Park, Grays Harbor, Washington, near Lake Quintalt, where he checked in and paid for one night in cash. He signed in as “Lyle Stevik,” from Meridian, Idaho, and at this point there was nothing particularly strange about him other the fact that he was not wearing a jacket despite the chilly weather and did not have any sign of a tan or of having been outdoors at all despite the fact that summer had just come to a close. The clerk did not think anything of it at the time, and “Lyle” was led to his room. The soft-spoken, mostly nondescript man would no doubt have never really made any impression at all and been forgotten, if not for the strange series of events that would begin to play out.

Not long after checking in, after taking a shower Lyle went to the reception desk and complained about the noise coming from a nearby trailer park. At this time he was described as looking rather dazed and harried, creepy even, and he demanded that he be moved to another room away from the racket. The clerk obliged and changed his room, and the next day when the cleaning lady went to the room the man informed her that he had decided to stay a few extra days until Monday. He told her that she did not have to clean, but did request fresh towels.

That day and the following day he was seen pacing about near the highway, which was not particularly weird but seemed slightly odd to the clerk. At no point was he seen with anyone else, he was not witnessed to leave the motel grounds, and he did not use the motel phone at all. At one point the maid came back to clean the room, but the man only opened the door a crack and said it was not necessary. Indeed, apparently only once did he let her into the room, to change the trash bags.

When Monday, September 17th came, the man calling himself Lyle was expected to check out, and when he didn’t the maid went to his room to see what was taking him. When her knocks went unanswered she let herself in and saw him kneeling in the room’s closet with his back to her as if in prayer. She called out to him but he did not respond. Not a little creeped out by this, she ran to get the motel manager, and when they returned he had still not moved. It soon became apparent why. “Lyle Stevick” was dead, a belt tied around his neck and attached to a clothes rod.

A cursory look at the room showed that at some point he had closed the window blinds and removed his plaid, button-up shirt and placed it on a chair. Oddly, he had lined the closet where he was hanging with pillows, and there was a towel placed between the belt and his throat. In the trash were two copies of the local Sunday newspaper, meaning that he had been alive at least on that day, although it is unclear where he had gotten the papers as no one had seen him leave the motel to go anywhere. There was also a crumpled up note reading “SUICIDE” in childish block letters. On the bedside table was found a note that said simply “For the room,” along with $160 in crisp, new $20 dollar bills. There was no sign of a bag or backpack, which was odd considering the clerk thought she had seen him carrying one.

Authorities were notified and things just got stranger. A more thorough look around the room showed that there was no luggage, no extra change of clothes, no wallet, no ID, no cell phone, no food containers or receipts of any kind, and it seemed that the only thing he had had with him were the clothes he was wearing, a new toothbrush and tube of toothpaste, and a Styrofoam cup. Odder still, when the name Lyle Stevik was checked it turned out that there was no one reported missing by that name, and it was just a pseudonym. Investigators would later speculate that the name could be a misspelled version of a character named “Lyle Stevick,” from Joyce Carol Oate’s book, You Must Remember This. The only real person at all that turned up was named Lyle Stevick, with a "c" added, who was living in Oregon, but there was no relation at all between the two.

There were other strange clues as well. The address he had left when he had checked in was not for a home, but rather for the Best Western Motel in Meridian, Idaho. When the motel was contacted, they had no records of a guest named “Lyle Stevik,” nor could any employees recall anyone matching his description. Additionally, although it was assumed he had come to his final destination by bus, no bus drivers along that route at the time he had arrived could remember ever having seen him before. The clerk would claim that he had seemed to have had perhaps a Canadian accent, but this did little to solve the mystery. No one knew who he was or where he had come from, when his fingerprints were run through international databases they turned up nothing, and pictures of the man were widely circulated but no one came forward. One investigator pointed out that he may have been a non-native English speaker, as it seemed that he might have been practicing trying to spell the word “suicide” on the scrap of paper, but this was pure speculation. In short, the mysterious Lyle Stevik had seemed to have come from nowhere.

An examination of the body turned up some other details about the mysterious Lyle Stevik, which mostly served to pose more questions than answers. He was estimated to be around 20 to 30 years in age, and found to be perfectly healthy, the only thing out of the ordinary being that he had attached earlobes, meaning that his ears attached directly to his head, with no discernable lobes. There was evidence that he had gone through extensive dental work to have his teeth straightened and whitened, and he was found to have recently lost a large amount of weight, around 40 pounds. It was not a lot to go on, and even his race was ambiguous, with an appearance that could have possibly been of Native American or Hispanic heritage but it was not clear.

As for his death, the obvious conclusion was that he had committed suicide, and with the towel around his neck to prevent debilitating injury in case he failed suggests he had planned and perhaps even practiced beforehand, but the lack of any identity and the myriad odd clues made the whole case very mysterious indeed. Who was this man? Where did he come from? Why did he not have any ID on him? How had he arrived at the motel, and why had he chosen that particular place out in the middle of nowhere? Why did he call himself “Lyle Stevik” and why had he used that address of the motel in Idaho as his own? What was he hiding from? What was the significance of that note in the trash that read "suicide,” and where and why had he gotten the two newspapers? Where were all of his belongings? If he was committing suicide, why would he dutifully pay in cash for his room and where was the wallet that he would have carried his cash in? Most importantly of all, why had he committed suicide? No one knew the answers to any of these, and we still don’t.

There has been speculation that he had decided to kill himself possibly because of something related to the 9/11 terrorist attacks, which had happened less than a week before. Perhaps he had lost someone or been deeply affected by the event. As to his belongings, he could have gotten rid of them somewhere, possibly in the nearby Lake Quintalt, but if he did they have never been found. It’s also possible that if he was planning on killing himself maybe he had simply not brought anything with him at all, not even a jacket for the cold weather. His name and address could have just simply been something he came up with off the top of his head to keep people from snooping into his business, although why he would care when he was going to commit suicide anyway is anyone’s guess. It’s also unknown why he would decide to extend his stay to spend several days at the hotel if he was planning to kill himself. Perhaps he had had second thoughts? Who knows? 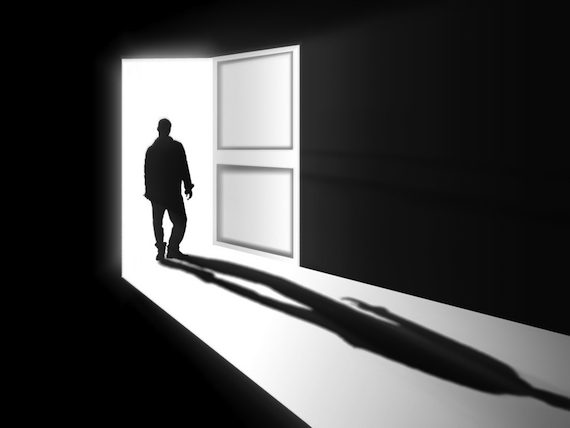 In recent years there have been other promising clues that have popped up and served to throw in some added mystery to the whole thing. The daughter of the maid who originally found Stevik’s body has claimed that her mother had related to her how she had heard voices coming from the room on the second day of his stay, suggesting more people in the room with him at that time. She claims that her mother was adamant that it had not been the sound of the TV. The mother apparently also made the revelation that since the room had features for the handicapped, the closet bar would have been too low for the rather tall Stevik to have successfully hanged himself. This, plus his continuous refusal to accept cleaning services could possibly point to foul play, adding another layer to the case, but it still would not answer many of the myriad mysteries and strange clues surrounding it.

To this day, no one has come forward who recognizes “Lyle Stevik,” and there is still no clue as to what his identity is. He remains a specter. Whole forums are devoted to picking apart this mystery, but largely we know little more than we did when that body of this mysterious stranger was found kneeling on the floor of that remote motel. It is a case that has cloaked itself in strangeness and baffling conundrums that are nowhere near being untangled. Who was Lyle Stevik and what happened to him? We will likely never know.