Wolves have a certain alluring yet frightening effect on us. They have figured prominently in the folklore and myths of countless cultures across the world, and have always struck a precarious balance between awe and respect, and hatred. In Japan there were once two subspecies of wolves that roamed these lands, and they are a tragic case of animals once worshiped as gods among the native populace falling from grace to end up just a few more extinct animals to add to the list of the casualties of human encroachment and activities. Yet, if some mysterious and persistent reports are anything to go by, then perhaps these majestic animals do still exist after all.

The Honshu wolf, of which I have written of on Mysterious Universe before here and also here, is the most relatively well known type of supposedly extinct wolf of Japan, but it was not the only one. The cold, northern wildernesses of the Japanese island of Hokkaido, as well as Sakhalin, the Kuril islands, the Kamchatka Peninsula, and the Iturup and Kunashir islands, were the domain of the Hokkaido wolf (Canis lupus hattai, formerly known as Canis lupus rex), also known commonly as the Ezo wolf.

The Ezo wolf was a distinct subspecies, and had a more traditionally wolf-like appearance than its southern cousin, the Honshu wolf. The skull was large and formidable, with long, curved canines, and the body dimensions were larger, stockier, and more similar to that of grey wolves. The Ezo wolf was typically grey in coloration, and significantly larger and more powerful, as well as more intimidating looking than the wolves of Honshu. Like the Honshu wolf, the Ezo wolf descended from Siberian wolves from the Asian mainland, yet the Hokkaido subspecies retained a size and appearance closer to these large ancestors.

The retention of large size in the Hokkaido wolves is likely due to a variety of factors. The higher latitude environmental conditions of Hokkaido more closely resemble those of Siberia, favoring the retention of a robust build like that of the Siberian wolves. Prey in Hokkaido was bigger and more formidable as well. Some prey species, such as the now extinct red deer and Hokkaido deer, were significantly larger than the subspecies of the other Japanese islands, making size an advantage for the wolves. In addition, there was likely a more prolonged intermingling between the Ezo wolves and their Siberian wolf progenitors. While the Honshu wolf evolved in relative isolation in the south, growing smaller and more dog-like due to a variety of new environmental pressures, the Ezo wolf in the north was able to further interbreed with Siberian wolves in a habitat similar to that of their ancestors.

The Ezo wolves were highly venerated by the indigenous Ainu people of northern Japan. These wolves were considered to be powerful and high ranking gods and spirits, along with bears and owls, and feature highly in Ainu myths, legends, folklore, and poems. They were known by many names to the Ainu, Horkew Kamuy (Howling God), Yukkoiki Kamuy (The God Who Takes Deer), Horkew Retara Kamuy (White Wolf God), and Horkew Kamuy-dono (Lord Wolf God). To this day, many landmarks bear Ainu names pertaining to these wolves.

Like other venerated Ainu animals such as bears and owls, the Ezo wolves were often used in a ritual known as iomante, or the “sending away ceremony.” In this ceremony, bears, owls, or wolves would be tied up and tormented with sharp sticks before finally being killed. Although it sounds decidedly gruesome, the Ainu believed that wolves were powerful gods, and that the only way their souls could be released and returned properly to their realm was to cause great pain and suffering before death. It may sound horrible to most Western readers, but from the Ainu’s point of view it was a great honor and courtesy for the animal. They were doing it a favor. Iomante was in fact one of the only acceptable ways of killing the wolves, as it was not permitted to kill them by poison arrows or firearms, or any other conventional means, as it showed disrespect. Furthermore, even when properly killed, any Ainu who wasted the meat or pelt of a dead wolf was said to be hunted down and killed by the remainder of the vengeful pack.

The Ezo wolves were highly regarded for their hunting prowess, and there are many accounts of the Ainu seeking to domesticate them. This practice was confirmed by several surveys by the Hokkaido Development Agency, which found some Ainu villages actively raising wolf cubs for this purpose. After being raised among the villagers for around two years and becoming accustomed to people, the wolves were then supposedly used as hunting companions, or released to go hunt deer and other animals for the village on their own, the carcasses of which they were said to dutifully bring back.

These wolves tended to be difficult to train, yet the Ainu so valued their hunting abilities that they also tried to reproduce these qualities in their dogs. It is documented that the Ainu would intentionally breed their dogs with the wolves to this end and the practice was so common in some areas that there are reports that mention wolves loitering near villages when dogs were in heat. This practice of interbreeding dogs and wolves is thought to have contributed in part to the development of the Ainu-ken breed of dog (known more commonly in Japan by its official name, the Hokkaido inu), well known as a formidable hunting dog that is still used today to hunt deer and other prey.

Despite this high standing among the Ainu, inevitably it was rampant modernization that led to the Ezo wolf’s demise. After the collapse of feudal government in 1868, Japan started to turn to the West for help in modernizing the nation. The government became convinced that ranching was the key to Hokkaido’s future agricultural prosperity. An American from Ohio by the name of Edward Dun was recruited by the Japanese to teach ranching techniques to Hokkaido farmers and kick-start the industry, paving the way into the future.

Horse and cattle ranches began popping up all over Hokkaido, throwing humans and wolves into contact with growing frequency. Unfortunately, in addition to bringing American ranching approaches and methods to Japan, Dun also had brought with him the American negative attitudes towards wolves in general. It was not long before tensions rose and the long respected and venerated wolves were seen as a threat to the booming ranching industry taking hold of Hokkaido. Dun suggested that a strychnine poisoning campaign be launched against the Hokkaido wolves in order to exterminate them once and for all. Before long, a bounty system was also put into place by the Hokkaido Development Agency to speed things along, and the wolves were actively slaughtered en masse. The numbers of Hokkaido wolves plummeted with frightening speed until in 1889, within just 20 years of the start of the poisoning campaigns, the Hokkaido wolf was considered extinct.

The Ainu have long held that the wolf existed well past this date, and even to this day sightings reports come in occasionally. On rare occasions, ranchers in modern times have complained of mysterious killings of their livestock caused by some kind of wild animal. Hikers and hunters have reported wolf howls as well. There have been many alleged reports of Ezo wolf sightings. Two ranchers in 1989 were out on horseback when suddenly in front of them two wolf-like canids darted out from the trees to go running off across a field in full view. The startled ranchers described the two animals as looking very much like timber wolves, and definitely not mere dogs. Another witness living in a residential area brushing up against the wilderness described how he would often see wolf-like animals slinking about on his property, and how one even tried to attack his dog. Other hikers and ranchers have sporadically come forward to share their own sightings of wolf-like animals prowling the remote wildernesses of the island as well. 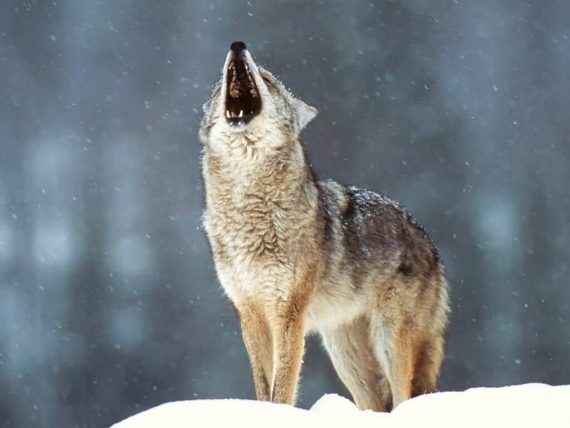 Could the Ezo wolf really still be out there? Many sightings have been dismissed on similar grounds as Honshu wolf sightings, with skeptics arguing that eyewitnesses are seeing wandering or feral wolf-like breeds of dog, such as huskies, malamutes, or Hokkaido ken dogs, that might resemble Ezo wolves under the right circumstances. The thought of huskies wandering around in the wilds of Hokkaido is not as far fetched as some may think. Some years ago there was a huge Siberian husky boom in Japan, and many less than reputable breeders were pumping them out as fast as they could to meet skyrocketing demand. Unfortunately, as is the case with many pet booms in Japan, as soon as the popularity wore off people wanted the next big thing.

In the city, huge numbers of these dogs were euthanized or given to shelters. In the case of some more rural areas, people often merely went out into the woods and simply abandoned the dogs. Considering the pet situation went from huskies all over the place to scarcely any at all, it seems at least plausible that a number of these sturdy, cold adapted dogs could have ended up feral in Hokkaido. A husky could feasibly be mistaken for a wolf. Mounted samples of Hokkaido wolves are extremely rare, with those that do exist being poorly done and deteriorated, and photos of living animals are not available. Many people have no idea what they actually looked like and may assume they were identical to the grey wolves they know about, although there were likely some differences. Considering this, perhaps after seeing something like a husky out in the wilderness, an eyewitness could jump to the conclusion that it was a Hokkaido wolf they saw.

Sightings of Hokkaido wolves are not particularly common, but could it really be merely dogs people are seeing or is it something else? It’s difficult to say. Besides sightings, other types of evidence are scant. There are no known photographs of surviving Hokkaido wolves, and physical evidence such as hairs or prints are extremely scarce. Some think that the chances of the Ezo wolf’s survival is slim. They argue that the poisoning campaigns were too devastatingly effective, the extermination too swift and thorough to have possibly left any alive. However, much of Hokkaido remains remote and inaccessible and perhaps could have offered refuge to a small population. If the Ezo wolves are indeed gone, it would be a deep shame. The spectacular natural vistas of this rugged land would seem somewhat incomplete without them. Hokkaido is a wild place that still looks and feels very much like a land inhabited by wolves. Perhaps it still is.

The Lizard Men of Costa Rica Carry on Bizarre Tradition