One of the richest sources of new, strange animals is the depths of our oceans. It is from here that have been spawned some of the weirdest creatures and legends, with the seas long said to be the haunts of mysterious beasts across cultures since time unremembered. One such mystery concerns a gigantic octopus said to prowl the waters of Japan since ancient times, and which continues to capture the imagination of the people of the area, showing that the sea does indeed potentially hold plenty of secrets left to be discovered.

The indigenous Ainu people of Japan's far northern island of Hokkaido have long told of a highly feared, enormous marine animal known as the Akkorokamui. The creature is said to lurk in the depths of Funka Bay, also known as Uchiura Bay or Volcano Bay, which is located in the Southwestern portion of the Northern Japanese island of Hokkaido. The bay is ringed on three sides by Oshima peninsula and is surrounded by the volcanoes Mt. Usu and Mt. Komagatake, hence its rather ominous and threatening nickname.

The Akkorokamui is said to be a gigantic octopus-like or squid-like creature, reaching sizes of up to 110 meters in length and with a coloration that is said to be a striking, brilliant red, often described as almost incandescent and sometimes likened to the color of the reflection of the setting sun upon the water. Due to this unique coloration and the creature’s truly immense size, it has long been believed that the Akkorokamui’s hulking form is visible from a great distance away.

The Ainu people have always feared the Akkorokamui, believing it to be an aggressive beast with a tendency to attack and swamp boats. Fishermen were often  known to carry large sickles aboard their boats in order to protect themselves from the creature. These monstrous beasts were said to actively lash up from the depths to submerge vessels or to even lurch onto shore to grab at any victims within tentacle's reach. The Akkorokamui was so incredibly large that its coming was reported to be even felt, as the water surged up with its approach. 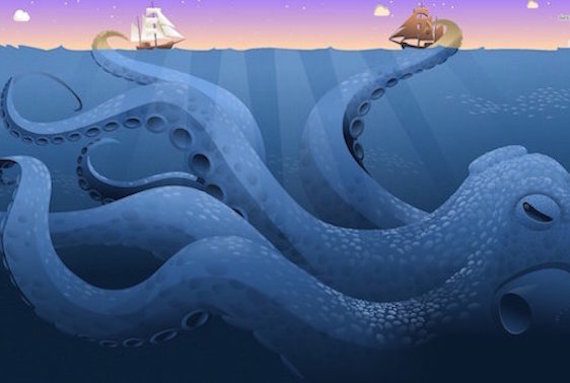 In addition to the long history of folklore and alleged sightings of the Akkorokamui made by Ainu, there are accounts written of by non Ainu as well. The 19th century Englishman and missionary John Batchelor, who lived among the Ainu for some time and is known for his extensive writings on Ainu life, wrote firsthand a journal entry of an alleged actual incident concerning an apparent Akkorokamui in his book The Ainu and their Folklore, where he writes:

In the morning, we found the whole village under a cloud. Three men, it was said, were out trying to catch swordfish, when all at once a great sea monster, with large staring eyes, appeared in front of them and proceeded to attack the boat. A desperate fight ensued. The monster was round in shape, and emitted a dark fluid and noxious odor. The three men fled in dismay, not so much indeed for fear, they say, but on account of the dreadful smell. However that may have been, they were so scared that the next morning all three refused to get up and eat; they were lying in their beds pale and trembling.

Another old 19th century account was made by a Japanese fisherman which I have translated from the original Japanese.

And I saw ahead something huge and red undulating under the waves. I at first thought my eyes deceived me and that I was merely seeing the reflection of sun upon the water, but as I approached, I could see that in fact it was an enormous monster, 80 meters in length at least, with large, thick tentacles as big around as a man’s torso. The thing fixed me with a huge, staring eye before sinking out of sight into the depths. 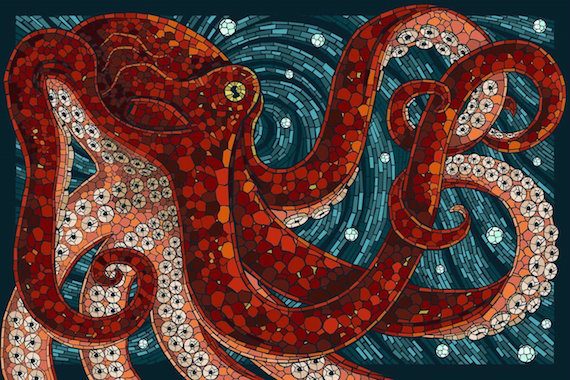 Other eyewitness reports of the creature have surfaced over the years as well, including into modern days. The passengers of one cruise ship in the bay in the 1980s were met with the surprising sight of what appeared to be a massive creature thrashing about in the water with what appeared to be tentacles breaking the surface. The creatures was described as being bright red in color and being around 80 feet in diameter. A fishing boat in the 70s also reported bumping up against something in the water which they at first took to be a rock, but when the crew looked overboard they saw an enormous red mass, and according to the report an eye peering out from the depths that was supposedly the size of a dinner plate. There was even a report of a beachcomber who supposedly came across a piece of what he said was an octopus tentacle that was reported as being around as thick as a telephone pole. It is unclear what happened to this specimen.

These sorts of reports are all very similar in some respects to old sea serpent sightings in the West, which leads me to wonder if there is perhaps some unknown animal lying at the heart of some of these stories. For example, based on descriptions and accounts, it has been speculated that there is perhaps a type of undiscovered, giant octopus in the bay or even a super-sized known species of octopus. Indeed, what is often considered to be the largest species of octopus is known to inhabit Japanese waters. The giant pacific octopus (Enteroctopus dofleini) is a very large species of octopus found throughout the coastal north Pacific, including Japan. These creatures have arm spans of up to 3 to 5 m (9.75 to 16 ft)  and can weigh as much as 10 to 50 kg (22 to 110 lbs), with unconfirmed reports of even larger specimens. Giant Pacific octopuses also are known to display a red coloration similar to what is reported with the Akkorokamui, although they are able to change their pigmentation in order to blend in to their environment.

It would not be that unusual to find a giant Pacific octopus in Funka Bay. However, there are several factors that make this explanation problematic. One is that this species is usually found at depths of over 200 feet. They can be found in shallower water as well, but it seems that this is not a species that spends a lot of time at the surface where it would readily be witnessed. Also, the sizes reported for the Akkorokamui are much larger than any giant Pacific octopus would likely ever get. Traditional stories of creatures 110 meters long (about 361 feet) boggle the mind. That would be much bigger than any living sea creature we know of. 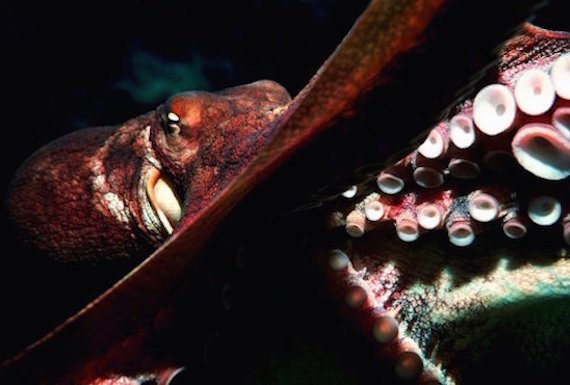 Even if we are to disregard these quite improbable extreme sizes reported in Akkorokamui lore, it stretches credibility to think of any giant octopus getting even close to that measurement, or indeed even close enough to be mistaken for something so big. Of course one cannot look at these possibilities without considering giant squid as well, although again these would be found in deep water, with perhaps only injured or dying individuals making their way to the surface. Again, we are faced with size issues, yet surely there is the possibility of specimens of giant octopus or giant squid out there even larger than those we have managed to measure thus far. It is not known exactly how big these creatures are capable of getting and the new discoveries of humongous squids such as the colossal squid (Mesonychoteuthis hamiltoni) lead me to think that there are still large octopuses and squid out there that surpass current known maximum sizes.

If it were some type of giant squid, the very nature of the bay itself could hold hints as to why these normally deep dwelling creatures would be seen so near the surface. It is thought that warm water currents can affect a giant squid’s buoyancy mechanism, causing them to rise to the surface where they may not always be able to get down again. To compound the problem, the blood of giant squids has been found to not carry oxygen as well at higher temperatures, which means it runs the risk of suffocating if it cannot make its way back down to the cold depths. A good many giant squid carcasses have been found in areas where a cold water ocean stream and a warm water stream meet, suggesting that sudden warm water may be responsible for bringing the creatures up from the depths where they are in turn seen by humans. Perhaps in the case of the Akkorokamui, a sudden warm water current could be caused by volcanic activity on the ocean floor, which in turn brings them to the surface. 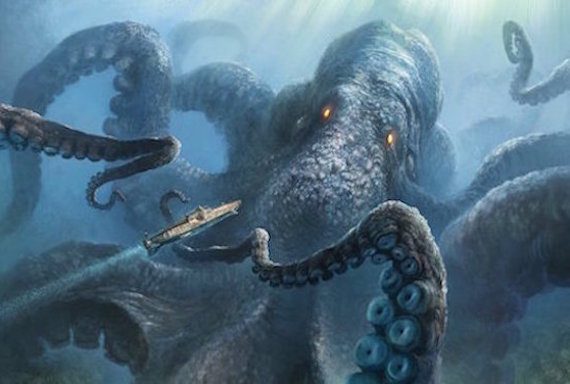 Another possible explanation for the Akkorokamui could also perhaps be found in the granrojo (big red) jellyfish (Tiburonia granrojo). This very rarely seen species represents a whole new subfamily of jellyfish, and was only discovered in 2003. These little understood jellyfish are known from only 23 individuals and get their name from their red coloration and large size, reaching over 1 meter (about 3 feet) in diameter. These jellyfish have been found in Japanese waters, so it is perhaps possible that one, or something like it, could have made it into Funka Bay. However, again we are faced with size issues, as the granrojo is even smaller than the giant Pacific octopus, with the larger ones measuring "only" around 1 meter in diameter. In addition, the granrojo is thought to typically dwell in very deep water at cold, dark depths of around 645 meters (2,100 feet). This makes it unlikely they would be observed at the surface and is indeed one reason why they remained discovered until 2003.

It is obvious that we are still finding new creatures in the deep and that some of these organisms get quite large. It is not completely far-fetched that some unknown large species such as these could be possibly behind stories of the Akkorokamui. Although the Akkorokamui is most often thought of as merely part of Ainu folklore, is there a chance that it could be more than that? Could stories of this creature be based in some way on a real, living animal?

The ocean depths are still a source of new surprises and zoological mysteries, and likely will be for some time. As we delve deeper into the seas, we will undoubtedly come across startling discoveries. What lies out there over the waves or deep down beneath them? Are there wonders waiting there in the murk that we have yet to fathom? It is easy to sea why the oceans of the world have managed to hide so many mysteries and birth so many myths. With cryptids such as the Akkorokamui, I wonder if there is a point where folklore, real animals, and the true unknown collide.