The Mystery of Antarctica’s Blood Falls Has Been Solved

Blood Falls is one of the most famous and ominously-named landmarks in Antarctica. Discovered in 1911 by Griffith Taylor, the red waterfall occasionally pours its stunning blood-like water down a wall of pristine white ice that attracts both photographers and scientists trying to determine its cause and its source. The color is no longer a mystery … researchers have long known that the briny water is loaded with iron that oxidizes when it hits the cold surface air. Now a new team has discovered its origin and solved the mystery of how water can flow inside the frozen Taylor Glacier. 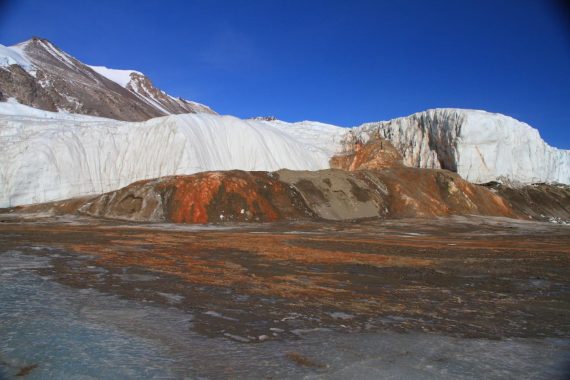 According to a new study in the Journal of Glaciology, researchers from the University of Alaska Fairbanks and Colorado College – two schools known for cold winter semesters – took radio-echo sounding equipment to Blood Falls and Taylor Glacier. According to co-author Christina Carr from UAF, the team methodically moved two antennas – a transmitter and a receiver – in a grid pattern starting at Blood Falls and moving backwards across the glacier. Lead author Jessica Badgeley from Colorado College explained why this worked.

The salts in the brine made this discovery possible by amplifying contrast with the fresh glacier ice. 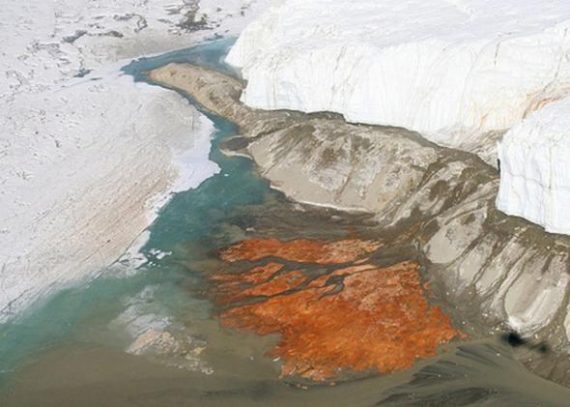 The “discovery” was that liquid water is flowing in a cold-based glacier whose core is well under freezing and whose base is frozen to the ground beneath it. That should be impossible, but … Blood Falls!

While it sounds counterintuitive, water releases heat as it freezes, and that heat warms the surrounding colder ice. Taylor Glacier is now the coldest known glacier to have persistently flowing water.

Make that persistently flowing “ancient” water. The bloody, briny, iron-rich liquid is estimated to have been trapped and flowing inside Taylor Glacier for at least one million years.

Here’s one more big discovery just in time for last weekend’s March for Science. The list of names of the co-authors of this study includes Jessica Badgeley, Erin Pettit, Christina Carr and Jill Mikucki – proof that research under tough conditions is being performed by women scientists.

Sadly, that shouldn't be a big discovery but it's definitely something worth marching to preserve and expand.

Are We Alone? Scientists Find No Alien Lasers in Milky Way