A Freedom of Information Act (FOIA) request by John Greenewald at The Black Vault has turned up a number of declassified U.S. Forest Service reports and communications which show that even the Department of Agriculture has documented reports of UFO sightings and alleged alien bases on Earth. One of the documents details an account given by an individual who called the Forest Service to report a secret, alien-filled government base being constructed in the Tonto National Forest near Phoenix, Arizona: 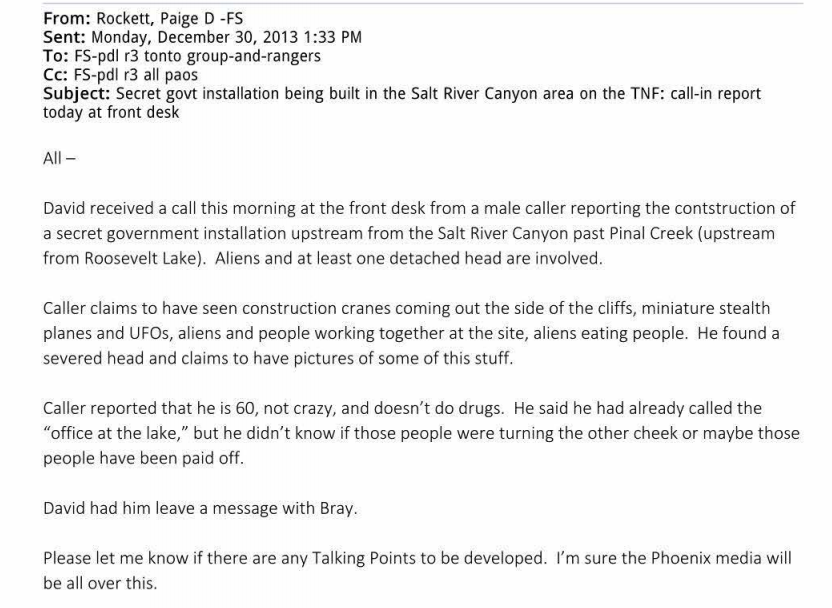 One set of emails concerns eyewitness reports that “flaming space junk” from a UFO or satellite which crashed in the forest near Massanutten Mountain in the Appalachian mountains of Virginia and caused a forest fire. The Forest Service determined the cause was likely lightning. Another correspondence contains an eyewitness report of a UFO near Wyoming’s Bighorn Mountains and luckily contains pictures of the alleged UFO, although their grainy condition makes them difficult to analyze. Most likely, the object is a flying insect which happened to be whizzing by when the photo was taken. Judge for yourself:

It’s been a momentous couple of years for leaked and declassified documents. Thanks to both Bond villain (or hero? anti-hero?) Julian Assange and the Freedom of Information Act, mystery hunters now have thousands of government communications and documents to pore over, many of which mention the existence of extraterrestrials, military sightings of UFOs, and even psychic phenomena. While paranormal phenomena are mentioned many times in these documents, there is still, as usual, a lack of concrete evidence and an overabundance of hype surrounding them. Nevertheless, it’s a step in the right direction that the public is now aware that there is at least some level of recognition of these phenomena by government officials.