Have aliens gotten tired of flying discs? Is square the new shape in UFOs? That may be the new trend if recent sightings are any indication. MUFON received photographs from a UFO witness in Philadelphia showing a square flying object, while another witness in southern Ohio reported watching a low-flying square. Is it time to check for trade-ins at the used saucer lot?

The Philadelphia witness (MUFON case # 82950) saw the square UFO on the morning of 4/3/17 and described it as a wide diamond or a square. The black parallelogram appeared to be high in the north-northwest sky and moving slowly but at a faster speed than a floating balloon. In the ten minutes the UFO was in sight, the witness noticed four flashes of light and took some pictures. Another person also saw the UFO and said it didn’t look like a helicopter. 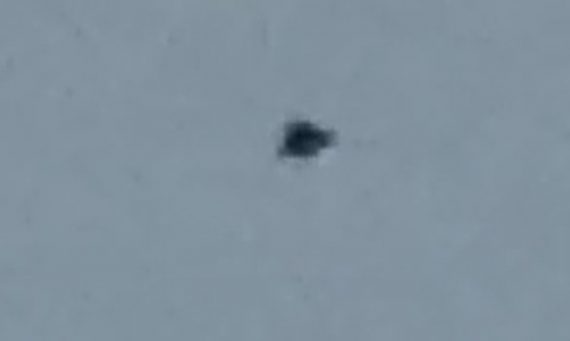 The Ohio square sighting (MUFON case # 83058) occurred on 4/9/17 in the evening (10 pm) over Xenia. The witness and his son saw the “square shaped ufo” fly over their house in the direction of -– if you live in the area, you know already -- Wright Patterson Air Force Base. Could this have been some type of secret military plane?

It was square shaped when overhead but from a distance it was flatter from top to bottom. It appeared to have flames coming out of the rear of it and had no wings or other visible lights other than the flames and orange glow about it.

This square UFO was apparently flying too fast for the witness to take a picture or get his girlfriend outside to see it.

I observed what appeared to be a square, low-flying object approaching me from the east. There were four unwavering lights, two red and two yellow. There was very little space between the lights, giving the appearance of a compact square. Strangely, it seemed that one of the sides was its leading edge, not one of the angles.

That IS strange … a craft that didn’t have a point out front. This UFO disappeared and then showed up again, traveling at an estimated 25 mph in a different direction relative to the witness. Could a test military aircraft or a drone pull off that kind of maneuver?

For the seeing is believing crowd, another report (#76835) has three witnesses – a father and two young adult sons – in Batavia, Illinois, on 6/5/16 seeing and recording a dark square object, possibly the size of a car, with rounded corners that they estimated to be about 300 meters from them.

Square UFO sightings are rare but more frequent that you might think. Perhaps the ubiquitous “flying saucer” description gets used for other shapes. Large rectangles are often the shapes given when a witness believes they’re seeing a “mothership.” Other than internal space, why would a mothership need to be rectangular or square instead of round?

A secret military plane seems more likely, especially when the front is a pointed angle. That shape fits flying wings and similar crafts. But what about the reports of square UFOs with the flat edge in front? That doesn’t seem too efficient, even for a sophisticated propulsion system.

Hats off as always to MUFON for their excellent research and database and to NUFORC for their reports as well. Let’s hope one day we'll all see one of these square UFOs close-up.