This is the kind of thing that happens when you let college students pick their own research projects. A group of current and former University of Michigan mechanical engineering students have built what is believed to be the world’s largest freestanding Rubik’s Cube – the popular puzzle that’s already hard to solve without the added challenge of having to push hundreds of pounds of metal to make it spin. Is this the ultimate exercise equipment for geeks?

It's the largest solvable mechanical stationary Rubik's Cube. It was kind of an urban myth of North Campus, this giant Rubik's Cube that's been going on for a while.

According to current student and project participant Ryan Kuhn, a group of U-M students came up with the idea for the cube on Pi Day 2014 (Pi Day is a holy day for engineering students). The group included Martin Harris, who could solve a Rubik’s Cube in 43 seconds (not bad, but far from the 4.73 seconds world record set in 2016 by Feliks Zemdegs of Australia) and Samuelina Wright, who could deconstruct one and reassemble it in a solved state (now THAT’S impressive). With two other students, they received approval to make a monster cube as a capstone senior design project. 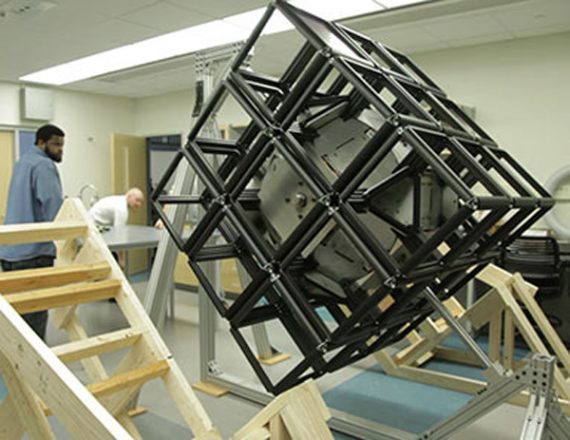 Fast-forward to 2016 and the group is now graduating with the cube completed except for some technical tuning and a heavy-duty display stand that won’t collapse while it’s being used. Ryan Kuhn, Jason Hoving and Doug Nordman – with guidance from the graduates – finished the project, which was unveiled this week inside the G.G. Brown engineering building on the Ann Arbor campus.

“Wait a puzzle-solving minute!” is the cry heard from Knoxville, Tennessee, where a downtown Holiday Inn boasts that it has the World's Largest Rubik's Cube, a motorized and often-repaired remnant from the 1982 Knoxville World's Fair. Officially, the record is held by Tony Fisher in England. Noel Perkins, the Donald T. Greenwood collegiate professor of mechanical engineering and adviser to the students, defends the Michigan cube.

There is no other human-manipulable cube like this, to the best of our knowledge. That said, it is not, technically, the largest cube. We're aware of a larger cube that requires the user to literally roll it on the ground to solve and rotate the faces. None of that is required by our stationary design. So to be very precise, it is the world's largest stationary, human-manipulable Rubik's Cube.

Human Manipulable. Didn’t they once open for the Grateful Dead?

“Human-manipulable” may be a stretch. Even if world-record holder Feliks Zemdegs drinks a case of energy drinks first, 43-second-man Martin Harris says it could still take him an hour to solve the big one. 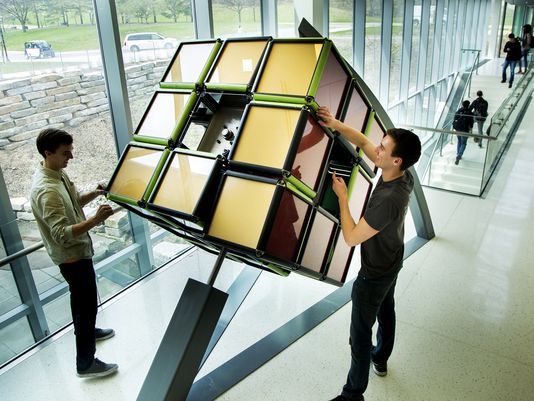 World’s biggest or not, the Rubik's Cube may be the perfect symbol for college life. As Harris puts it:

By inputting enough work, it's possible to make the cube more organized, but its natural tendency is toward chaos.