I don’t know much, but I do know for sure that I lost my virginity to an extraterrestrial woman. 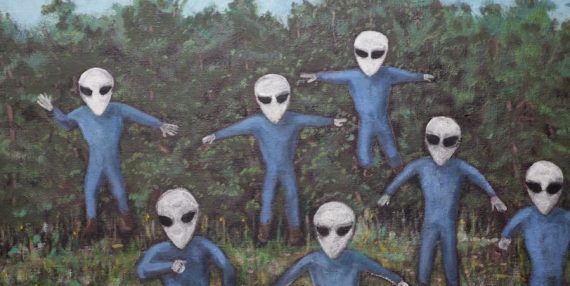 In previous interviews about his experiences and his artwork, Huggins, now 72 and a resident of Hoboken, New Jersey, claims he was first visited by aliens in the early 1950’s when he was 7 or 8 years old and living in Georgia. He didn’t know what they were at the time, but later determined that they were Grays.

There were the grays, the little hairy guy, an insect being…

That doesn’t sound too appealing. Huggins says he told his parents about it and they chalked it up to his vivid, pre-artist imagination. He says things got better when he was 17 and met an alien named Crescent while on a walk. Apparently her large black eyes, pale pointy face and wig-covered Gray head were more to his liking, because he claims they got naked and had sex. In one of his NSFW paintings of losing his virginity, he shows that the naked Crescent looks a lot like a naked human female. 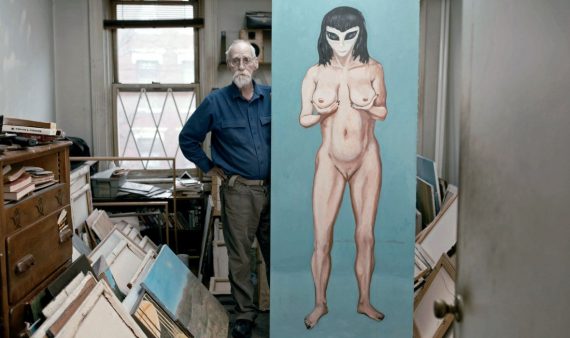 Huggins not only lost his virginity but became a father – he claims that the couple had over 50 hybrid children, some of which he has painted. Although he’s obviously had plenty of intercourse with Crescent, he says he’s normally sedated and the experience is subdued. Poor guy. There’s also been contact with other Grays who encouraged him to have sex with Crescent and sire the hybrid kids. He believes they may have also saved his life by warning him about a snake and saving him from drowning. The conversations with the other Grays has been lifelong and ongoing. 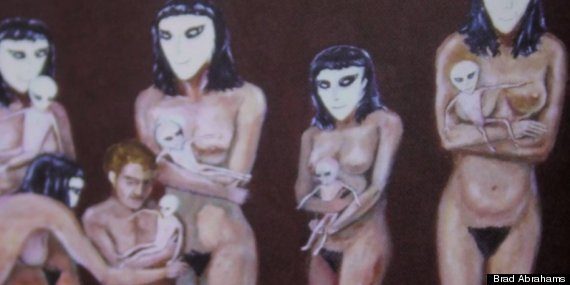 The paintings seem to be both a celebration of his alien experiences and a way of dealing with them. The impressionistic artwork shows aliens and saucer-shaped spaceships. Huggins says he went to abductee meetings when he was in his 40s and found them to be “a club that no one wants to belong to.” He also met with a neurotheologist (neurotheology links religious experience and behavior to the nervous system) who suggested a trauma or seizure could be responsible for visualizations that Huggins believes are real. Huggins is also an avid sci-fi, fantasy and horror movie fan.

Huggins got some attention in 2014 when filmmaker Brad Abrahams agreed to make a documentary after hearing him on the radio. While there have been trailers, that has been about it until this spring when it was released in Hoboken. While the film was not reviewed for this piece, information about upcoming showings are available on its Facebook page or website.

David Huggins tells an interesting story to back up his paintings. Are they surreal or real?

Is he still cocooning with Crescent?