Banshee May Have Been Photographed in Pakistan

When was the last you saw or heard anyone talk about a Banshee? Not the fighter jet or the superhero or the band but the “fairy woman.” Unless you’re Irish or Scottish, the answer is probably never. How about a Churel or a Chudail? Unless you’re from South Asia, you’re probably unfamiliar with these names for "the ghost of an unpurified mother" or a female tree-sprite. Both of these mythical spirits popped in a recent news story where a photograph of a banshee/churel/witch/something sitting on a high wall in Pakistan, or possibly India, depending on which story you read, went viral. Is the banshee messing with the media?

According to India.com, the story begins with Faakhir Mehmood, a Pakistani singer and composer who posted the photograph on his Facebook page and asked:

Can someone verify? The supposed picture of CHURAIL captured by many people in the middle of the night in Hyderabad. 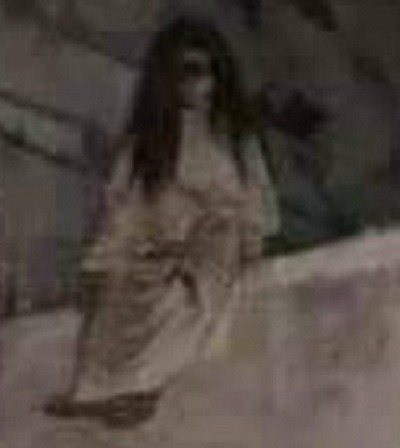 Hyderabad is a city in the Pakistani province of Sindh, but it’s also the name of a city in the Indian state of Telangana, which may be why there were conflicting reports on where the photograph of the alleged churail – another variation of churel – was taken. There were plenty of comments on Mehmood’s post, as well as on the various news stories, debating the authenticity of the photograph, especially from people in Pakistan and India.

For those not from South Asia, a chudail is one of those mythical witch creatures sadly based on the fears of things women do – like having babies or menstruating. In this case, the “the ghost of an unpurified mother” is the spirit of a woman who died during pregnancy or while giving birth. It can also be the ghost of a woman killed or abused by her husband or his family who comes back as an ugly hag to torment them, especially the males.

Fortunately, the legend is used to scare people into taking good care of pregnant women (better than no pre-natal health care plan at all). However, if a pregnant woman dies, some families will take the body out a side door so she can’t find her way back. The body may be buried covered with thorns to prevent her from rising from the grave. There are also far worse practices and mutilations that make one wonder why women in South Asia want to get pregnant at all.

Why did some of the reports mention banshees? That’s for the non-South Asians who need something to relate to. Banshees are the shrieking female spirits of Gaelic lore whose wailing is considered to be an announcement of an impending death. Since banshees are also depicted as being ugly hags, the references were made for those who have no imaginations.

So, what was sitting on the wall in the photograph posted by Faakhir Mehmood? The general consensus is that it’s a real photo of a fake chudail. The woman is probably either ill or drunk and the caring individuals at the foot of the wall are probably yelling for her to jump or lift her top or do something so they’ll have a better picture or video to post on their own Facebook page. Mehmood probably posted it because he hasn’t had a hit in a while and is looking for some media attention.

Why in 2017 do men still fear women? Asking for a friend.

The Unexplained Explosions of Island F