Coins May Date Shroud of Turin to First Century

The Shroud of Turin contains an image – the so-called Man of the Shroud – that many believe identifies it as the burial shroud of Jesus of Nazareth. It’s kept in the royal chapel of the Cathedral of Saint John the Baptist in Turin, Italy, and has an extensive history since the mid 1300s when it was first put on display. Its authenticity has not been endorsed nor rejected by the Catholic Church, but scientific study of it has evolved into an entire discipline known as sindonology. 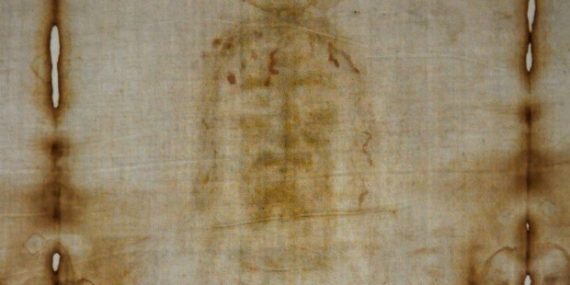 A radiocarbon dating test in 1988 on a corner of the shroud dated it to between 1260 and 1390 but the results have been questioned by both shroud believers and other scientists. Now, a coin expert using 3D projection images taken in 1976 claims that bulges on the eyes of the Man of the Shroud look like coins from the reign of Tiberius Caesar, putting them at around the year 29.

Numismatist Agostino Sferrazza made this revelation in an interview on RCF Liège, a radio station in Belgium. He’s been studying the 3D images created by computer scientist Nello Balossino at the Turin Faculty of Sciences and believes, as do many others, that there appears to be a bulge on the eye. After eliminating all other possibilities, many experts say this could only be coins placed over the eyes of the deceased after death. Further enhancement of the images shows a lituus (Roman staff) on one and a cup on the other.

However, what convinced numismatist Sferrazza were the barely legible letters YKAI. He believes this is part of the Greek “TIBERIOY KAICAPOC” which means Tiberius Caesar, the Roman emperor from 14 CE to 37 CE. Based on his expertise and historical records, Sferrazza puts the date of the coins at 29 CE and has "no doubt" about it.

Does this mean the shroud also dates to 29 CE? Or does it mean that whoever put the image on the shroud (which has still not been explained and is still only available for study via photographs) was smart enough to include coins from the right time period? Unfortunately, absolute scientific proof would require a more destructive analysis of the piece of cloth and the threads with the image on them. As with religious icons in virtually all religions, the chances of that happening are pretty slim.

For now, the coin hypothesis is still a hypothesis and the origin of the Shroud of Turin is still shrouded in mystery.