Have the Crips and the Bloods been recruiting marine animals for underwater gangs called the Crappies and the Blowfish? Has a tattoo artist figure out how to put human images on fish as a way to start a new reverse trend for Koi? How else can you explain the large tattooed fish caught by fishermen in the Philippines? A Disney promotion for “Moana” that got away before it could be used?

According to Philippine News, pictures of the tattooed fish first appeared on the Facebook page of GMA News on May 5. While the type of fish was not identified in the initial post, one photo shows it next to a normal fish to illustrate the illustrations. The fish was caught near Lopez Jaena in Misamis Occidental, possibly in the Mindanao Sea or the Iligan Bay. Since there is no Fishbook, the images were posted on Facebook for help in figuring out what could have caused them. 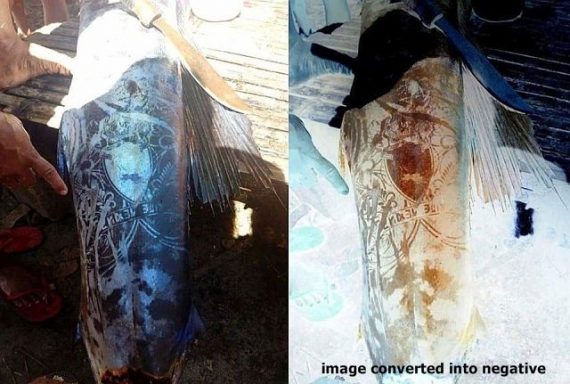 A negative image of the picture sharpens the details, showing letters, numbers and indiscernible symbols or pictures. While many commenters joked about fish getting tattooed, the sad political state of the Philippines caused some to suggest that the fish was a police officer in disguise looking for drug addict fish as part of "Oplan Tokhang" (knock and plead) – the brutal anti-drug program that has claimed thousands of lives in that country.

Others looked at the weird tattooed fish as a sign or a messenger from the deep, like the oarfish that are harbingers for tsunamis, predicting something bad about to happen to the nose-breathers on land.

That actually is close to the what may be the cause of the tattoo. The most likely scenario is that the fish at some point was caught in a plastic or fabric bag with writing and designs on it that, over time, was transposed onto its skin. That would explain the reverse lettering and vague images. 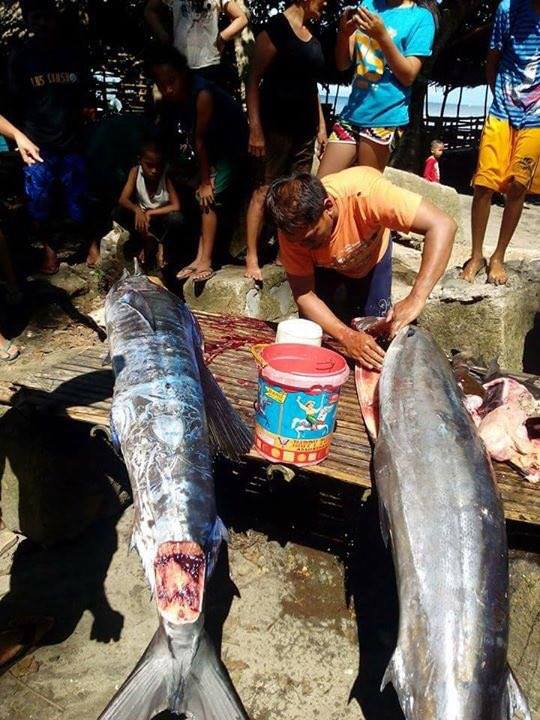 Sadly, the tattooed fish wasn’t released as a retribution for what was probably a painful period of living inside the bag. It appears it was filleted like the rest of the catch and is on its way to someone’s dinner table … a dinner whose scraps will end up in a plastic bag that may someday be dumped in the ocean where another fish can get caught ... and the cycle continues.

Perhaps the tattooed fish was indeed bearing messages from the deep to humanity in general and the Philippines in particular – stop killing the oceans and stop killing yourselves.