Frogzilla Has the World Baffled

A 13-pound American bullfrog would be a world record by more than ten pounds. A 13-pound, 3-foot-long frog of any kind would be the biggest frog in the world, nearly doubling the size of the largest Goliath frogs living in Cameroon and Equatorial Guinea in Africa. An amphibian nicknamed “Frogzilla” must certainly be some sort of massive monster worthy of massive Internet attention. But is it monster movie worthy?

The story of Frogzilla begins where everything is bigger – Texas. On May 26, the South Texas Hunting Association posted a picture it claimed to have received from Markcuz Rangel, the large -- but not much bigger than the frog -- man in the photo. Rangel claimed to have shot the enormous frog with the rifle he was holding at a pond on a ranch near Batesville, a small town in southwest Texas between the Rio Grande and the Nueces River. 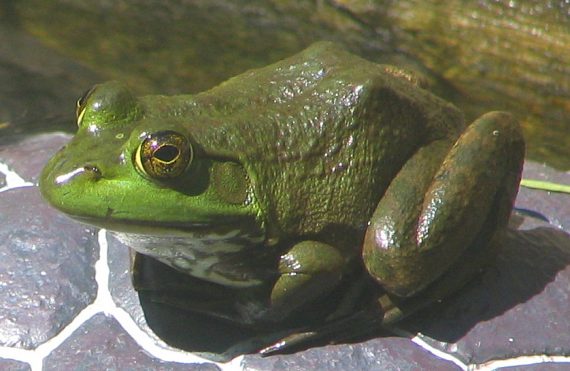 While no other information was given, that area would make it an American bullfrog, (Lithobates catesbeianus) the amphibian that made fried frog legs famous. It’s primary territory is southern and eastern parts of the U.S. but its tasty legs have caused it to be introduced across the U.S. and in South America, Western Europe and Asia. Even in the best of ponds with plenty of frog food (rodents, reptiles, crayfish, birds, bats, other amphibians), the American bullfrog tops out at a little under 2 pounds and 8 inches in length.

Could Frogzilla be a lost Goliath frog (Conraua goliath)? These monsters can weigh over 7 pounds and reach over a foot in length and have been reduced to endangered because of development, the pet trade and their tasty legs and other parts. The frog Rangel is holding looks nothing like a Goliath, which prefer dense humid jungles near rapidly-flowing rivers – not a pond in Texas. 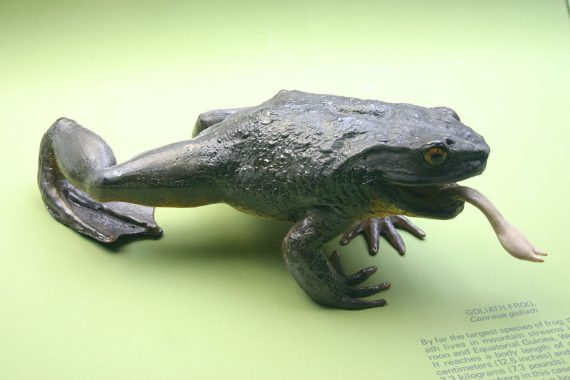 So what is Frogzilla? Is it a real frog? Should we (or at least Texans) be afraid? And what’s with that hair?

The Houston Chronicle contacted Steve Lightfoot of the Texas Parks & Wildlife Department and he confirmed that Frogzilla is (or was) definitely an American bullfrog. However …

It's not as bigly as it appears. [It's an] optical illusion created by extending frog toward the camera -- similar to what you see with fishermen holding up fish to make them appear larger. Still a big bullfrog, though.

So apparently frog hunters are big liars (sorry – exaggerators) just like fishermen. Rangel may be holding the frog closer to the camera with a pole – which would explain what looks like a ring around its neck. The black stuff that looks like hair is probably seaweed or vegetation that he didn’t clean off in his excitement to take a picture that would fake out the world.

While Frogzilla is already the name of a popular fishing lure and a DC Comics villain, it’s probably not big enough to star in its own monster movie. However, if it hopped east to the South Texas Nuclear Generating Station and drank some radioactive runoff  …

New Ancient Henge Found in England, This Time with Corpses