Giant Eye Appears in the Sky over Leeds

What’s up (no pun intended) with the sudden rash of sightings of giant eyes in the sky? In less that a month, photographs have been posted on the Internet of a giant eye staring down at Chelyabinsk, Russia. Less than a week later, another giant pink eye (let’s hope no one rubbed it) was seen over the city of Nýdek in the Czech Republic. Now a man in Leeds, Yorkshire, has shared his photograph of an eerie eye in the sky that’s so well defined, it has some screaming “Big Brother” while others are shouting “Big Horus!”, “Big Photoshop!” or “Big deal -- it’s a weird cloud!” What’s up over Leeds?

The photograph was taken on May 3rd, an overcast day (duh), by Leeds resident Graham Telford, who describes himself as an amateur photographer. He certainly speaks like one, as well as someone who knows a little meteorology, as he describes photographing the big eye.

I was actually taking pictures of a couple of lenticular clouds but it was quite windy and I could see this other shape forming over the house so I kept taking photos - I'm glad I stuck with it. I contemplated going in to get my proper camera but I didn't have time. It disappeared as quickly as it had formed so I got a few shots on my iPhone and then it vanished. I take photos of anything out of the ordinary - odd clouds, the northern lights, birds - anything that catches my eye, so to speak, but this was something totally different. I've taken so many photos of cloud formations over the years but never anything as unusual or as defined as this. 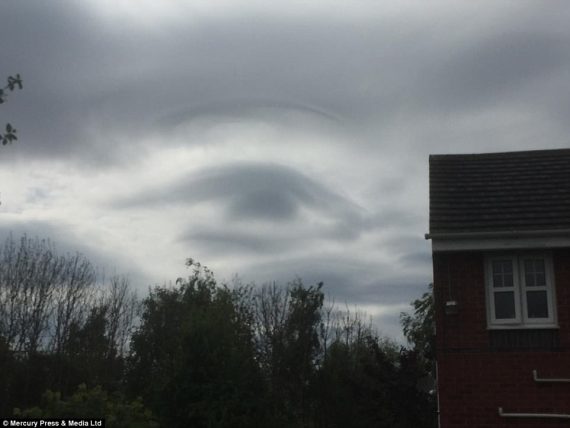 So, a guy who knows his cameras and his clouds sees an eye in the sky so well defined, it even has an eyebrow. It must have been edited, right?

A couple of people have said it must be Photoshopped because it's so good but it's not. That's exactly how it was. It hasn't been anywhere near a computer.

We’ll take your word for it, Graham, and add your photo to this mysterious growing list. The eye over Chelyabinsk seems to have been caused by a light beamed from the ground, possibly from a train station. The eye over Nýdek seems to have been caused by ELVES (Emissions of Light and Very Low Frequency Perturbations due to Electromagnetic Pulse Sources) – an ionospheric event similar to sprites. (Elves? Sprites? What are meteorologists reading on their breaks?) The Leeds eye looks like a lenticular cloud. What’s the one thing they all have in common?

Eyes! People are seeing big eyes in the sky! Around the world! Is this just a coincidence or is something really happening? While these explanations seem to fit each phenomenon, there’s a feeling that each could easily be followed by: “Nothing to see here … move along … and stop looking up in the sky so much … watch where you’re walking … check your phone.”

Whatever you do, don’t stop looking and don’t stop recording what you see. You may be the one who finds the answer. For what it’s worth, to paraphrase Stephen Stills …

There's something happening here
But what it is ain't exactly clear
I think it's time we stop
Children, what's that eye?
Everybody look - what's going … up?

Shoe With Severed Foot Inside Appears on Dock in South Carolina