Here Be Globsters! Strange, Amorphous, and Often Misidentified Monsters of the Deep

It almost looked like something you'd expect to have seen in a 1960s Toho Pictures kaiju film... if not for the fact that popular giant monsters like Godzilla wouldn't start appearing in theaters for several more years.

The year was 1924, and decades before there were giant reptilian beasts crawling out of the ocean depths on the silver screen, something strange had been splashing around in the water off the coast of Margate, South Africa. Observers described the "thing" as being large and white, and resembling a polar bear, but with a long, trunk-like appendage protruding from its face, and a strange, lobster-like tail. This unusual creature at times was said to have risen nearly 20 feet out of the water, as curious onlookers said the monster appeared to be locked in combat with a pair of killer whales.

Apparently, the creature didn't fare so well, either. Shortly after the "battle", the remains of this unusual, trunked creature finally made their way to shore, where photographs of it were taken, later appearing in an article in the Daily Mail in two months later in December.

This legendary creature, dubbed "Trunko" for its unusual proboscis, was discussed in cryptozoology circles for a number of years before, in 2010, new photos of the mystery monster turned up. Darren Naish, an astute and skeptical paleontologist with a penchant for cryptozoology, was able to readily identify the glossy white "fur" that covered the creature as merely being "badly decayed collagen", which one would expect to find amidst the badly decomposed remains of a typical cetacean.

"Trunko", in other words, was merely a dead whale, whose carcass had been fed upon by those hungry killer whales, rather than having lost to them in battle.

The Trunko affair is but one of many famous incidents involving what, in 1962, cryptozoologist Ivan T. Sanderson dubbed "Globsters," which are essentially amorphous looking, badly decomposed remains of large sea creatures like whales, which occasionally turn up on beaches. In more recent news, the appearance of a massive whale carcass in Indonesia, as reported recently here at Mysterious Universe by Paul Seaburn, was at first mistaken by some observers to have been the remains of a giant squid. As photos of the creature later revealed, portions of the guts, and what had possibly been sexual organs apparent in the images, could certainly have contributed to the mistaken belief that the dead creature possessed "tentacles" of some sort.

The majority of the "Globsters" tend to be the remains of some variety of whale, though on occasion, basking sharks and other aquatic species do appear in the rankings as well. The notable similarity between several Globsters that have appeared over the years and the Trunko carcass--namely the presence of the decomposed collagen which resembles white hair or fur--would seem to help confirm this, although at times there have been surprisingly in-depth analysis of Globster remains which helped make these determinations. 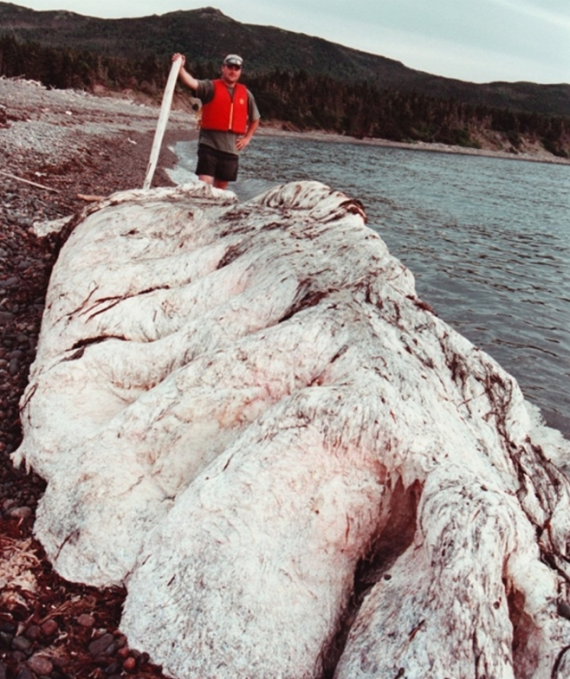 Such had been the case with L.E. Wall's electron microscopy analysis of collagen samples taken from a famous Globster, which appeared on a Tasmanian beach in August of 1960. This scientific study, which resulted in the identification of the Tasmanian creature as being (you guessed it) a whale, however, did not occur until more than two decades after the creature's initial appearance. Almost invariably, this probably led to speculation during the intervening years, as to what the identity of the creature might have been.

Other notable "Globster" appearances include the so-called "Bermuda Blobs" of 1988 and 1997, as well as a Scottish "blob" that appeared on the Hebrides in 1990. Similar carcasses have washed ashore at Nantucket in 1996, Four Mile, Tasmania in 1997, and at other localities as widely separated as Newfoundland and the Chilean coast since the turn of the century. In most cases, the biological remains were determined to have belonged to whales.

While unconvincing as far as evidence of "sea monsters" may go, the occasional appearances of "Globsters", as Ivan Sanderson called them, remain a novel, if not curious (and slightly noxious) footnote in the annals of modern Forteana.