How Christianity Changed the Chicken

Move over, Colonel Sanders. Long before you and your restaurants popularized plump breasts with extra-crispy coatings and wings that taste great but couldn’t lift a fat bird off the ground even if they had jets, another group with a leader dressed in white used its power to change the evolution of the chicken by altering its DNA to make them less aggressive for mass breeding and lay more eggs. That organization was the Catholic Church. Wait, what?

It’s true. The organization more often linked to fish actually changed the evolution of the fowl in 10th century Europe. According to a new study published in the journal Molecular Biology and Evolution, while chickens and humans began their relationship about 6,000 years ago when hungry prehistoric homo sapiens first tasted the legs and eggs of an Asian species of red jungle fowl, a major evolutionary change took place around 1,000 AD that significantly altered the evolutionary path of the birds. The scientific indicator was an increase in the thyroid-stimulating hormone receptor (TSHR), a genetic trait that results in less aggression and more eggs. But the cause of this variant at that point in time was a mystery. 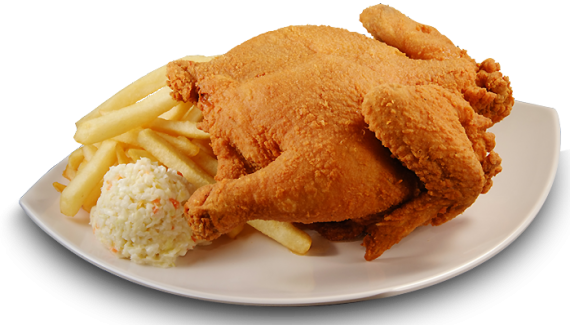 That changed when Dr. Anders Eriksson, a lecturer at the Department of Medical and Molecular Genetics, King's College, London, led a research team armed with ancient DNA data and a new statistical modeling technique to a pile of medieval chicken bones.  According to their study, the TSHR trait began to appear around 920 AD … a period in which the statistics indicated something else happened.

Several independent archaeological studies have documented substantial increases in the frequency of chicken remains between the 9th and 12th centuries AD, as well as a shift towards the management of adult hens, presumably to increase egg production.

But why? Socio-economic data provided a hint, according to Eriksson.

This significant intensification of chicken and egg production has been linked to Christian fasting practices, originating with the Benedictine Monastic Order, which disallowed the consumption of meat from four-legged animals during fasting periods, but the restrictions did not extend to birds or eggs. These dietary rules were adopted across Europe and applied to all segments of society around 1000 AD.

Can the Catholic Church take credit for KFC, buffalo wings, McNuggets and the popularity of the big-breasted, big-winged birds we have today? Not completely, says Eriksson.

The increase in chicken production could also have been favored by urbanization, the introduction of the more efficient agricultural practices and a warmer climate.

That makes sense, but it’s not exactly good news. Here’s the scary part, according to study co-author Greger Larson.

This study demonstrates just how easy it is to drive a trait to a high frequency in an evolutionary blink of an eye, and suggests that simply because a domestic trait is ubiquitous, it may not have been a target for selection at the very beginning of the domestication process.

Think about how quickly humans are affecting the world’s fish supplies and agricultural crops. What will researchers 1000 years from now find out about how we may have changed genetics by how we eat? One thing is for certain … they won’t be able to blame the monks.