How to Photograph UFOs According to the US Military

In a recently declassified Department of Defense document, the US military establishes protocols for its personnel on how to photograph an unidentified flying object.

The excitingly titled 2001 DoD manual, “DoD Instruction 5040.6, Life-Cycle Management of DoD Visual Information (VI)” contains twenty-seven pages of directives on how military personnel are to capture, contain and submit all visual records, such as photos and videos. While much of the document is basic standard operations procedure for the collection and storing of visual data, it does contain specific references to the documenting of UFOs.

In Section 21 of Chapter 5 of the document, it states,

The following table concerns imagery that records UFOs and other aerial phenomena not obviously identifiable as conventional aircraft or missiles. The table also lists the priority assigned to each category of imagery and provides relevant handling instructions.

Below is a table that contains two specific headings concerning strange aerial phenomena. One entitled, “Aerial flying objects not obviously identifiable as conventional aircraft” and the other “Aerial phenomena (including moving lights and similar phenomena).”

The submission procedure for UFO photographs and videos from military personnel is simple, make digital copies in the case of analog film photography or video, and send all media, original negatives included, to the now defunct Defence Visual Information Center. As of 2011, all the DVIC is now under the umbrella of the Defense Imagery Management Operations Center (DIMOC).

In an exclusive interview with Paul Dean, the UFO researcher and blogger who uncovered these documents via the Freedom of Information Act,

Whats particularly odd about that the table of what to photograph and what not to, is that it doesn't vaguely say 'UFOs…' It lays out fully both 'Unidentified Flying Objects' with descriptors, and then 'Aerial Phenomena…' with descriptors.

Furthermore, it is odd that military personnel are given instructions regarding UFO sightings, since the US military officially has no interest in the subject. When the United States Air Force scrapped their official UFO investigation, Project Blue Book, in 1969, it was accepted that no government agency was looking into the UFO subject. From the 1970’s onward, the military expressed that no one in the government was handling UFO sighting reports, pictures, videos, or anything. It was a non-issue fit only for lunatics. 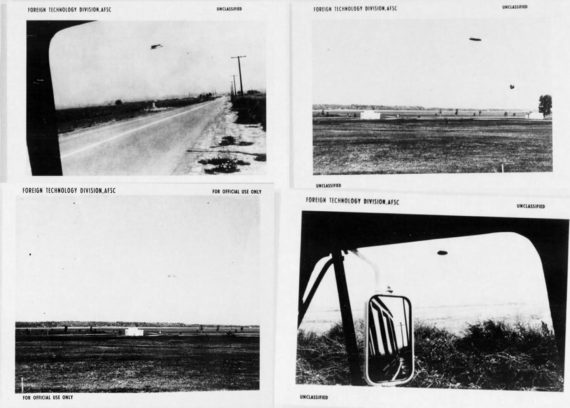 This DoD document, among others, proves that the military’s interest in UFOs did not end in 1969. According to Dean,

How can they keep a straight face about the UFO issue when they shove it in plain English for the Armed Forces to digest. It's actually asking for photos of damn UFOs!

Dean is quick to point out that UFO does not necessarily equal otherworldly aliens, but it does beg an interesting question; what is going on in our skies that the military is actively establishing protocols to collect UFO visuals?

Dean takes great care to point out how the document separates the concepts of an unknown aerial phenomenon, such as strange meteorological and natural events, and a flying object “not obviously identifiable as conventional aircraft.” He states,

This is yet another example of US military doctrine that specifically treats ‘UFOs’ as distinct from other aerial platforms, despite the assurances from the US military that UFOs are not within their jurisdiction. Simply, the term ‘UFO’ shouldn’t even be utilised.

The continued examination by Dean, and other UFO researchers, of declassified documents sheds light into the very real duality of the phenomenon as a whole. On the surface, the military openly has no interest in investigating the UFO question, yet, in classified documents, still maintains regulations on how to deal with photographic or video evidence of them.

At the end of the day, this does make sense however. No military wants to be caught with its pants down in regards to odd objects flying through its own skies. It isn’t about aliens so much as foreign powers using American airspace to test their new high tech toys. Perhaps the regulations are there for military personnel who snap a few shots of some secret Russian jet, known to military intelligence, but to no one else. To the untrained eye, it looks unconventional because it’s a new design, yet to the top brass who have had their eyes on it for a while, it’s just a new and fancy aeroplane.

Aliens or not, Dean continues to dig into the patchwork collections of files he’s accumulated, and the rest of the UFO community keeps its eyes to the skies watching for more signs of this phenomenon that just won’t go away.