After 15 great white sharks surrounded paddleboarders at Dana Point off the Southern California coast, a lot of people are staying on the beach for a while. Except on Seram Island in the Maluku province of Indonesia where a giant, dead, slimy, unidentified sea monster washed ashore this week and has locals wishing they could strap it to a paddleboard and push it back into the water in hopes some great whites would make it go away. Unfortunately, it’s much too big for that, so it’s become a temporary tourist attraction now that a video of it has virally terrified people who are nowhere near Indonesia. Thanks Internet!

According to the Jakarta Globe, the 15 meter (50 feet) corpse of the creature was discovered on Hulung Beach before dawn on May 10th by local resident Asrul Tuanakota, who thought at first it was a giant stranded boat. He notified the rest of the Iha villagers who some reports said were “terrified” … although brave enough to take plenty of videos for social media posts. One popular one uploaded by the Indonesian army (don’t they have better things to do?) speculated at length on what it might be and what it might do.

A giant squid has washed ashore in the island of Seram, in Hulung village. From the looks of it, it's unclear how many people can fit in this creature. If it eats people. This is a rare animal. It's length is more or less 10 meters... fifteen ... fifteen meters.

Nikolay Kim, Deputy Head of the Forecasting department of the Sakhalin Research Institute of Fisheries and Oceanography, wasn’t sure what it was but he was pretty confident it didn't eat people and wasn’t a local monster.

Judging by the appearance of the head, this is clearly some big dolphin. According to a characteristic of the skin, it is a rare species. I doubt that it lived in our waters. Most likely, the animal was brought by the warm current. We often get tropical and subtropical species here and, when they cool down, they stay here and then die. I can confidently say that this is some kind of a dolphin. However, it has fur. It’s unusual. Dolphins do not have any fur.

Kim was pretty convincing up until that “Dolphins do not have any fur” closing argument.

If this were a game of Sea Monster Family Feud, the number one answer would be “whale,” although what specific type of whale was open for discussion. Regina Asmutis-Silvia, executive director of Whale and Dolphin Conservation, disagreed with the army’s “squid” assessment.

Giant squid are invertebrates and there are clearly bones visible (jaw, skull, vertebrate) so I am very comfortable saying it’s some type of rorqual whale. Certain species of baleen whales (rorquals) have ‘ventral grooves’ which run from their chin to their belly button. It is stretchy tissue that expands when they feed. 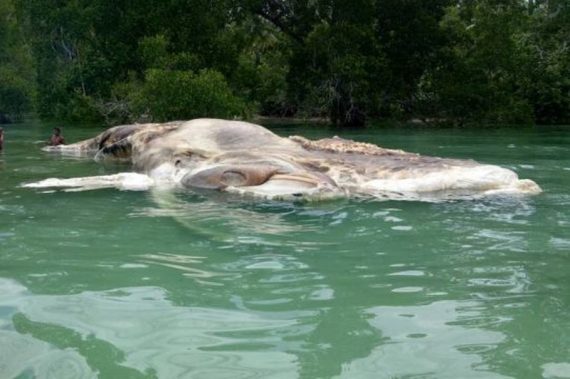 While ‘Ventral Grooves’ would be a great name for a band, Patasiwa Kumbang Amalatu, who posted his own video, didn’t think that’s what those things on the creature were and he disagreed that it was a baleen whale..

This is a humpback whale. These aren't tusks. This is its mouth, but it's covered with decomposed skin.

Marine biologists are also leaning towards “whale” but residents of the Iha village are looking at the water turning red and smelling the air turning putrid and turning to anyone who looks like they're from the government and pleading: “Who cares what it is … just get it out of here!”

Good luck with that. The government has to fill out paperwork and paperwork requires a positive identification of what kind of sea monster is being removed.

Can you help them out? What do you think it is?

LSD May Help Humans Win the War with AI