Walking and chewing gum at the same time is so 20th century. Today a person needs to simultaneously hold a phone, carry coffee, scratch an itch and point to which ingredients you want in your burrito bowl just to make it through lunch. If only there was a way to get a few more arms without having to be born a genius and go through a tortured childhood like Spider-Man’s multi-limbed arch-nemesis, Doc Ock. Good news, you pitiful two-armed average-yet-happy people. A Japanese company has developed extra limbs for the common man.

Attendees at the upcoming Siggraph 2017 Emerging Technologies expo in Los Angeles in late July will be the first to see, touch and possibly touch with the MetaLimbs developed by the Inami Hiyama Laboratory at the University of Tokyo’s Electro - Communications Intelligent Mechanical Engineering Department.

MetaLimbs, or Multiple Arts Interaction Metamorphism, is a set of robotic arms that reach around under your human arms and are controlled by sensors attached to your legs.

Controlling extra arms with your legs. That sounds simple enough … unless you’re walking. That’s just the first of many limitations on the MetaLimbs that make them not-ready-for-Doc-Ock-time but still an interesting invention n its way to becoming potentially useful. The arms are hung from the wearer’s back backpack-style, with the appendages coming to the forefront from under the human arms. 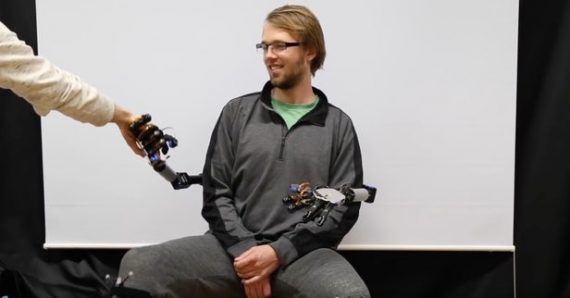 The mechanics of the arms are connected to wires running to sensors attached to the wearer’s knees, feet and toes. That’s not a good sign – two extra arms shouldn’t require 14 or more other limbs and joints to give up what they’re doing just so you can hold four phones at once. That means the user needs to be seated, although standing might be possible for short periods. 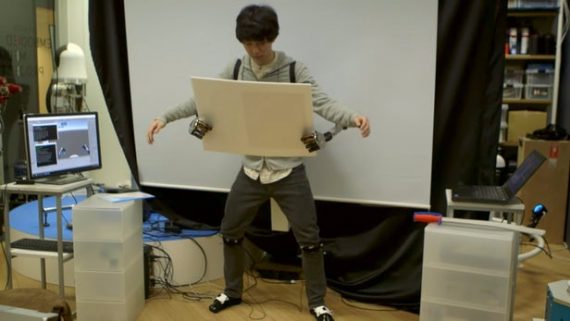 Once the wannabe Doc Ock is strapped in, a genius-level multitasking ability is required. Tracking markers on the feet and knees control the wrist and elbow joints of the arms. Bend sensors on each toe control the finger joints on each hand, allowing them to conceivably go from high-five to flipping the bird to making a fist before severe toe cramping inevitably sets in. To keep the robotic extra hand from crushing your paper cup of coffee and ruining both your pants and the expensive mechanism inside it, the hand sends force feedback to a squeeze band on the foot. 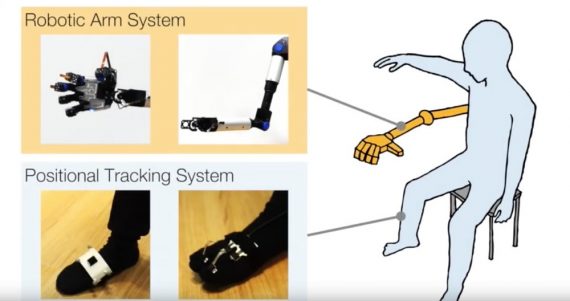 Is this too much work just to be able to hold an extra phone when you’ve probably already forgotten who you were texting because it took 20 toe flexes, three knee bends and a foot jerk just to get it to your other robotic hand? Yes, especially when the researchers’ friends over in the computer neurology department are already working on mind-controlled prosthetic limbs.

On the other hand, wearing the MetaLimbs is probably the only chance you’ll ever have to freak out Spider-Man.

Healing Pyramid in Russia is Destroyed by Major Storm