Killer Whales are on an Unprecedented Killing Spree

They don’t call them “killer” for nothing, but a group of tourists on a whale-watching boat in California’s Monterey Bay learned firsthand what it really means when they witnessed a group of nine orcas separate a gray whale calf from its mother and kill it in less than 20 minutes. While the killing itself is not uncommon, a marine biologist says it normally takes hours. What’s even worse, this was the fourth killing in just seven days and the core group of nine was a single family involved in all of them … a rate and practice she said was unprecedented in her 30-year career.

This was almost a record for how quick the killer whales attacked the mother and calf.

The San Francisco Chronicle reports that the first attack in the recent killing spree occurred on April 20th and involved 33 orcas. These groups can typically number up to 30 orcas. While they don’t need those kinds of numbers to take down one whale calf, marine biologist Nancy Black, who works for the Monterey Bay Whale Watch and is familiar with this pod, said they were in a feeding frenzy.

You'd think they'd already be full, yet [they] continue to eat.

And kill and eat and kill and eat some more. Black witnessed a portion of the pod killing and feeding three more times in seven days, culminating in the attack witnessed and recorded by tourists on April 26th. While the tourists were horrified, Black enjoyed it as only a marine biologist can.

[It’s] kind of exciting to see this group and how they’ve gotten really good at hunting. I expect they will become... more social in upcoming days as they [usually] do after stuffing themselves.

“They” is the core group of nine orcas which Black says is a four-generation family headed by a female.

Why is this family … this ‘marine mob’ … on a killing spree? Black surprisingly blames the victims. She says the gray whales were late to arrive at the bay on their annual migration from Mexico and the orcas were extra hungry – even though these apex predators had plenty of seals, sea lions, dolphins, tuna and other prey available. It seems you can’t beat gray whale dinners. 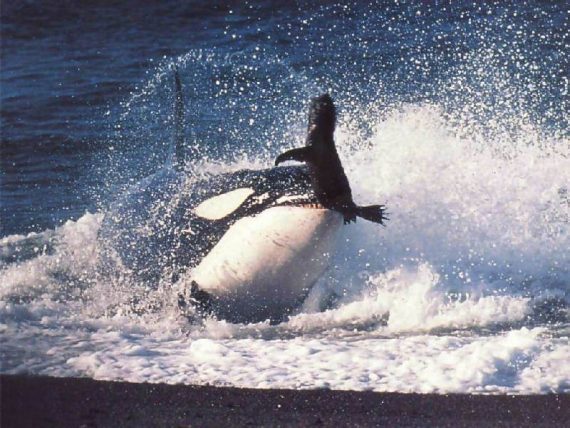 Is there any hope for the gray whales? Believe it or not, they’re getting some help from humpbacks. Black reports seeing humpback whales, who arrived earlier rather than later in their migration, scaring off the orcas with their trumpet sounds and even pushing them away from gray calves.

Late migrations … early migrations … hungry predators on killing sprees. Those are the things that happen when climate change messes with marine cycles. Do we really want to tick off the orcas who are still mad about Sea World?

Was a Creature Resembling a “Giant Owl” Recently Seen in Chicago?