To paraphrase Rick Blaine, Humphrey Bogart’s character in the classic, movie Casablanca ... of all the UFO sightings in all the towns in all the world, this is the one you cover? Mainstream media outlets - U.S. News & World Report, The Atlantic and others – actually devoted space to a UFO sighting over North Korea which traveled to South Korea. That location should make one suspect that it’s not aliens, but the mainstream knows that linking anything to North Korea these days – even UFOs – is good for business. So, did anyone in the most militarized, scrutinized and monitored area in the world identify the UFO?

As South Korea’s Yonhap news agency reports, an object was detected at 4 p.m. local time crossing the Military Demarcation Line, a 154-mile armistice line that was established by both countries in 1953 at the end of the Korean War, into South Korean airspace. The South Korean military fired more than 90 K-3 machine gun rounds at the object, which was detected over the country’s northeast Gangwon province, just 45 miles away from Seoul, its capital.

That’s The Atlantic, reporting that the South Korean military response to the UFO was “machine gun rounds,” making it a suspiciously low-flying UFO. Yonhap News Agency is South Korea's largest news agency and it reports that the UFO was brought down by the machine guns and no less than South Korea’s Joint Chiefs of Staff issued a statement.

The South's military is analyzing the object and its route and has beefed up its air defense.

What kind of extra air defense is needed against UFOs that can be brought down by machine guns? Does it sound like this UFO may be something identifiable? If you have “drone” in the office pool, you lost your bet. CNN revealed the answer:

Unidentified objects which flew across the border from the North were probably propaganda balloons … [South Korea's military said] the objects were in the shape of a balloon... (and) flew in the wind's direction before disappearing. Our military responded in accordance to our military protocol. 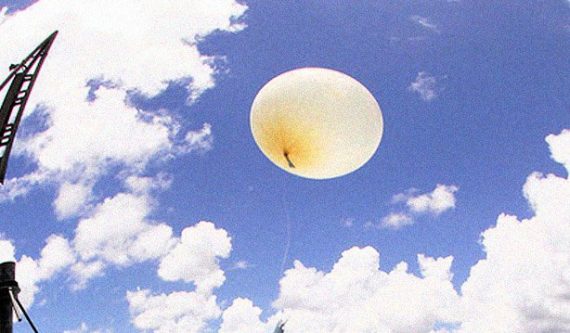 Propaganda balloons carrying leaflets and videos travel in both directions across the DMZ as both countries use them to deliver messages to and from the Internet and cellphone-deprived North. Obviously, this isn’t news.

What’s news is that the mainstream media chose to cover this incident as a “UFO sighting” as opposed to a military action or a propaganda balloon story. The UFO community struggles to get mainstream reports on other sightings that are much more unidentifiable and in need of explanation, yet propaganda balloons (it’s always balloons with these people) get the attention.

It’s just like the line from Casablanca’s famous song, “As Time Goes By.”

It's still the same old story.

Mysterious “Dr. No” May Have Been Serial Killer Responsible for Rash of 1980s Murders