Mass Cow Deaths by Lightning Are Mysteriously on the Rise

I went down over the hill and seen them laying there. They were just piled on top of each other. They were huddled up, trying to get out of rain.

“They” were dead milk cows – 32 in all – belonging to Missouri dairy farmer Jared Blackwelder. A storm hit Springfield in Texas County late in the morning of April 29th after Blackwelder had milked his cows and put them out to pasture. He heard and saw a huge bolt of lightning.

It was so bright I couldn't hardly see. It just brought fire down the fences.

Despite that, the farmer didn’t check on his animals until the evening milking when he found 32 of the certified organic cows dead. While he describes them as being piled on top of each other, the photographs show the cows scattered on the ground among some trees. That makes the mass killing seem odd. How could one lightning bolt kill so many cows over such a large area? A quick search on this phenomenon shows that it’s not unusual and seems to be happening more often. What’s going on? 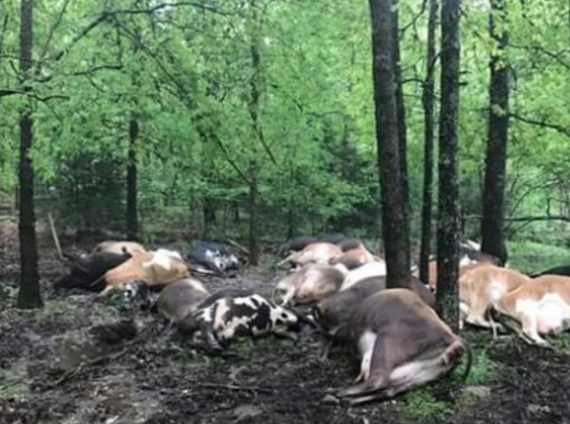 While 32 was obviously a lot of cows for one dairy farmer to lose, it’s not a record. According to the Guinness records people, the most domestic livestock killed by a single bolt of lightning was 68 Jersey cows at Warwick Marks' dairy farm near Dorrigo, New South Wales, Australia, on October 31st, 2005. Marks said the cows that moments before were standing on a wet hillside “were sprawled on the ground as if hit by a bomb.”

Sixty-eight dead cows is certainly a lot … but the record for non-domestic livestock killed by one lightning strike is 323. That occurred in August 2016 at a private hunting area in central southern Norway. Witnesses said the treeless mountain plateau was covered with reindeer corpses. 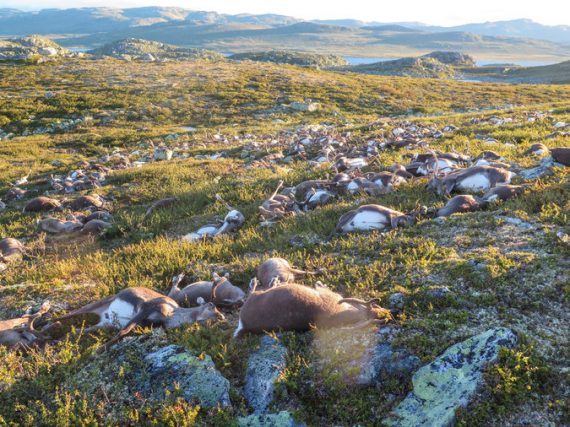 While not the same storm, 19 cows were killed by one lightning strike in Hallsville, Texas, the following week. The owner described the shocking scene:

It's just a freak thing; I mean they were just staying out of the rain.

Except it’s not a freak thing. Single lightning bolts killing herds of both domestic and wild animals are being reported around the world. Game reserves in Africa have seen lightning kill elephants and rhinos and, not surprisingly, giraffes. What is a surprise is that the giraffes, like other four-legged animals, are killed not by getting hit in the head but by electricity from the ground traveling up a leg and stopping their hearts before exiting and repeating the process in another animal … at the speed of lightning.

Why does it seem that these mass lightning deaths are occurring more frequently? For one thing, urbanization is encroaching on the grazing lands of both domestic and wild animals, forcing them to stand in tighter herds in greater numbers. Secondly, there are more violent storms happening worldwide, whether because of global climate change or something else. The animals don’t really care if you believe in climate change or not – they’d just like to survive the storms.

You're at the mercy of mother nature.

What else is new?

Cassini Records Eerie Sounds of Void Between Saturn and Rings