Just a couple of days ago, while I was being interviewed on the radio on the subject of Cryptozoology, a caller to the show asked an interesting and controversial question: do lake-monsters migrate? Well, I can say for sure I have never been asked that question before! Personally, I have grave doubts that the many and various lake-monsters of our world are flesh-and-blood animals. I am far more inclined to go down a paranormal path. But, to stay on track with the theme of the question, although I certainly do not think that lake-monsters "migrate," there's no doubt that there are significant numbers of reports of such creatures seen out of the water and on the land.

July 22, 1933 was the day that Mr. and Mrs. George Spicer had an encounter with a strange creature at Loch Ness, Scotland. It was close to 4:00 p.m. when the Spicers crossed paths something extremely weird - and, from their perspective, terrifying. As the pair drove along the road that links Foyers and Dores, Mrs. Spicer let out a loud scream. Around 600 feet ahead was a large animal which surfaced out of the bushes that dominated the roadside. At first, all that could be seen was what looked like a large trunk. As they got closer, however, the situation quickly changed. George Spicer described the animal as being hideous, an absolute affront against nature. What particularly struck Spicer – and which provoked his comments – was the way the thing moved. It did not do so like any normal animal. Rather, it lumbered across the road. in a series of odd jerks and coils; something which, for Spicer and his wife, was reminiscent of a massive worm. It was quickly lost to sight. 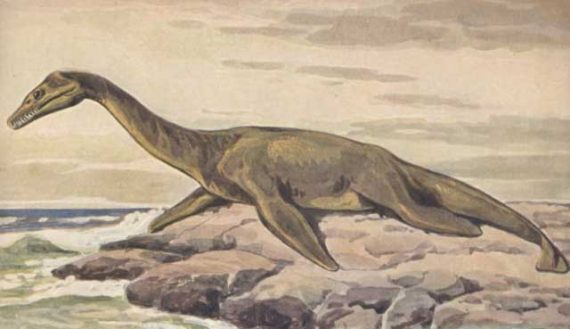 Six months later, a Nessie was once again seen on land. On this occasion, the witness was a man named Arthur Grant. That Grant was a student-veterinarian, added to the weight and credibility of his report. A keen motorcyclist, twenty-one-year-old Grant was on the roads, heading home at around 1:00 a.m. when he very nearly became the first person to ever have a head-on collision with a Nessie! Fortunately, however, neither monster not motorcyclist were injured. Again, the monster was out of the water and roaming the landscape.

"Ireland of the Welcomes" notes: "Although Irish folklore is littered with legendary ghoulish water creatures, few are as scary as Dobhar Chu (pronounced do-war coo)...The name, roughly translated means 'water hound,' or 'hound of deep.' Thought to be a cross between a giant otter and a hound, Dobhar Chu is about seven foot long, or about size of a crocodile. In fact it is also known as Irish Crocodile. The Dobhar Chu is a blood-thirsty, gruesome creature that lives deep in waters of a lake, river or even sea and is known to be able to travel great distances in water or on land [emphasis mine]."

Bringing matters into the latter part of the 20th century, a strange beast briefly haunted the people of the town of Rhayader, Wales, in late 1988. Under the dead of night, something very much out of the ordinary was killing farm animals - mainly sheep - in a very odd fashion: a solitary and powerful bite to the sternum. The Bodalog Farm saw more attacks than anywhere else. The owners lost more than thirty sheep. Thoughts and theories initially went in the direction of one of the U.K.'s mysterious ABCs: Alien Big Cats. That theory was discarded, however, when close to where the majority of the sheep were killed, large areas of flattened grass were found. That was not all: the flattened areas led directly to the waters of the River Wye. Near-instantly, this gave rise to the theory that some kind of water-based beast was stealthily hauling itself out of the River Wye under cover of darkness, attacking and killing the unfortunate sheep, and then returning to its watery abode. The killings soon came to a complete halt and the mystery was never solved.

So, yes, there are reports of lake-monsters seen on land (in fact, far more than many might imagine). But, actively migrating from lake to lake on a regular basis? Nope.

Stone Tablet May Be Proof That Tower of Babel Was Real