Mysterious “Explosions” in New Jersey Have an Older, Stranger History

These days, it seems reports of so-called “mystery booms” are an ever-present source of oddity and intrigue in the news.

With the recent landing of the U.S. Air Force’s X-37B mini-shuttle in Florida, part of the intrigue had been the sonic boom created as the aircraft broke the sound barrier upon reentry into Earth’s atmosphere, as it returned from its two years in orbit. While the cause of this boom is certainly no mystery, the specific mission of the X-37B, an unmanned ‘space plane’, is not public knowledge. 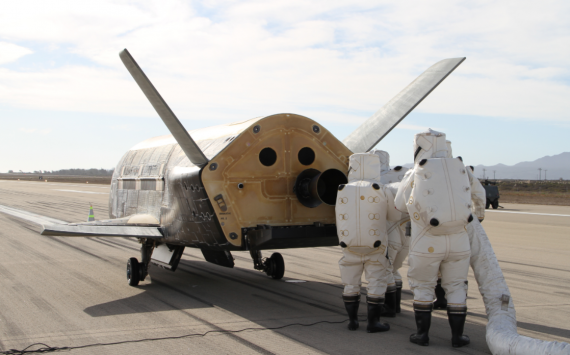 Elsewhere, there are booms occurring that can’t be tied to such things as aircraft, leading to a lot of speculation as to what their cause may be.

In Randolph county, New Jersey, residents have been kept awake by loud booms of mysterious origin, which some believe could be the work of explosives being set off outside of local noise ordinances.

The Randolph Reporter discussed the incidents earlier this month, noting that the booms appear to be increasing:

Once only heard occasionally, the noise is now occurring several times a week, and at random times from early evening to after midnight.

But whether it’s coming from a residence or on public property behind her residence, however, is hard to tell, she said... Swenson said the noise at times “sounds like gunfire. Sometimes, it’s a louder ‘boom.’”

She added a neighbor’s child was “afraid we’re going to war,” while another neighbor, a military veteran, could be traumatized by it.

Swenson said she spoke with police, but they can do nothing about it unless the culprits are caught in action.

In a history of recent mystery boom reports featured at my Mystery Booms website (dedicated to understanding the scientific causes underlying these "mystery" booms, and the varieties of conditions that can cause them), we see that unusual booms have been occurring in and around New Jersey for decades:

In late October 2014, media outlets in the northeast reported that residents in the community of Lower Township, New Jersey, had experienced what they believed to be a small earthquake. In some reports, the shaking had been accompanied by a loud “boom”, although the U.S. Geological Survey indicated that no earthquakes had been registered in the region at that time. Some believed that sonic booms caused by Navy aircraft drills might account for the noises, and though a Navy exercise had in fact been underway around that time, it preceded reports of booms and shaking by several days.

Only a few months earlier, similar reports of “mystery booms” in the northeast had appeared to correlate with seismic activity. In June 2014, the USGS had designated a small quake in the Hudson Highlands area near Garrison, in Putnam County, New York, as a category 5 earthquake. Loud booms were reported in conjunction with this incident, and despite the noticeable tremors, the location of the quake did not coincide with any nearby fault lines such as the Ramapo Fault, according to seismologist Leonardo Seeber with the nearby Lamont-Doherty Earth Observatory. It is worth noting that numerous other reports of “booms” and possible related phenomena exist for this region, including reports dating as far back as 1996.

Nearby, even older stories of the famous "Seneca Guns" go back for centuries, stemming from New York and the surrounding region (more on the Seneca Guns and other long-term regional "booming" phenomena can be read about here).

As for the causes of unusual loud "booms" such as those being reported in New Jersey, it may be that there are natural reasons for the sounds, rather than anyone setting off explosives.

"Superbolts," a variety of lightning often accompanying upper atmospheric storms, have been known to be associated with loud booms, even in some instances where no visible storm activity had been occurring. Another natural cause underlying some boom reports involves "frost quakes," also known by their scientific name, cryoseisms. Yet another natural cause (albeit a strange one) which might explain at least some reports of loud booms occurring at night involves what is called “Exploding Head Syndrome”, although this can easily be discounted in cases where several members of a community report the unexplained sounds. Finally, sonic booms from aircraft can also be associated with some boom reports.

In recent weeks, similar booms have also been reported in San Diego Country California, another region with a long history of boom reports.

It is believed that atmospheric refractions, in addition to the possibility that certain USAF training exercises involving supersonic aircraft, may have been linked to several of these Western reports over the years.