It’s the classic Fortean phenomena – fish falling from the sky. On May 16th, it reportedly happened in Oroville, California, at the Stanford Avenue Elementary School.

We came out here and all the sudden the kids start yelling really loud, 'look at this'.

Campus Supervisor Liz Barber-Gabriel had no idea recess would include fish that weren’t in the cafeteria. She apparently was the first person to see the fish covering the playground and other areas around the school building. However, it appears neither she nor anyone else actually saw the fish fall from the sky. Wherever they came from, they were also on the roof, as a custodian sent bravely to investigate found out. 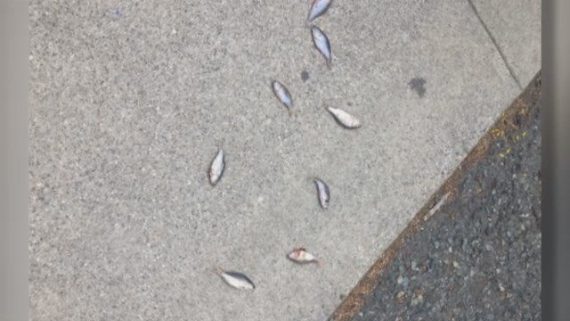 As expected in these times, the first thought was terrorism or some sort of sick prank, said Principal Shannon Capshew.

Oroville is in Butte County, California, and borders the Feather River and Lake Oroville recreation areas, so the next logical explanation is that the fish were brought to this school from their school in one of those bodies of water by … well, the usual explanations for fish rains are strong winds, storms with waterspouts or fish-eating birds that dropped their prey. A representative from the California Department of Fish and Wildlife examined the small fish and determined that they were carp, which don’t live in the Feather River or Lake Oroville. Even if they did, a local TV meteorologist pointed out that there were no storms or any other unusual weather that morning. No one saw any birds flying over and it doesn’t appear that the fish were clawed or half-eaten. Next guess? 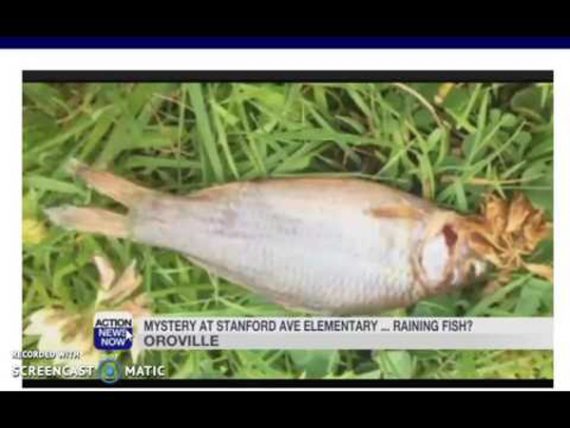 Years back there was an account of raining trout in Chico, so my thought was, 'did they come from the fish hatchery'?

Supervisor Liz Barber-Gabriel thought she was going to win the prize for solving the fish mystery. The Feather River Hatchery is nearby but it had no deliveries that could have spilled over from a truck (and how would they get on the roof?) nor any planes flying to the nearby Thermalito Afterbay to drop fish (never mind). That body of water does have carp, which leads us back to some sort of human intervention that transported the carp from there to the school. However, school officials saw nothing unusual and neither did officials at the Afterbay. Next guess?

The kids were just wild, the boys were just chasing the girls, so it was a fun thing in a way, but it was like 'where'd they come from?'

Boys chasing girls with fish … ah, those fun school activities. It’s unlikely the boys brought dozens of fish to school and hid them until recess.

The strangest part of the story, other than the fact that the fish only rained on the school grounds,  is that the witnesses – trustworthy teachers and school officials – all said the fish just appeared out of nowhere. Is the entire school pulling a reverse prank?

Or is it something else? Forteans?

NASA Scientists Want to Seed Human DNA Throughout the Universe