Mystery of the Narwhal Tusk Solved

The narwhal has long been called the unicorn of the sea for one big, long, good reason – this whale has a single spiraled tusk that can reach over 10 feet in length. Its purpose has long been a mystery and open to myth and scientific speculation - from magical weapon to navigation tool. Now, a lucky drone operator has captured video of narwhals using their elongated upper left canines for their true purpose. If you had “fish-ka-bobbing” in the office narwhal pool, you’re close.

Adam Ravetch, the drone operator, was camped out in Tremblay Sound, Nunavat, in Canada's far Northeastern regions doing research for the World Wildlife Fund Canada and Fisheries and Oceans Canada. Tremblay Sound is a narwhal winter habitat and a good, albeit remote, place to observe the reclusive and hard-to-track whales. The organizations are working to conserve the narwhals, which are threatened by climate change and human encroachments.

Yeah, yeah, yeah … so what’s the magic horn for?

The video footage from the two drones operated by Ravetch showed narwhals using their tusk to ram large Arctic cod, stunning them into a brief immobilized state that allows the whales to easily catch the cod for dinner. The narwhals are seen making multiple quick and random jabs at the cod, possibly to confuse them until they’re motionless and subdued.

That’s it? Cod fishing? This is a big deal, says Brandon Laforest, a senior specialist of Arctic species and ecosystems with WWF-Canada.

This is an entirely new observation of how the tusk is used.

“Observation” is the key word here. The researchers are excited about the potential of using drones to watch the whales in places that have been inaccessible to other methods of observation. They’re hoping future drone footage may confirm other theories on the tale of the tooth, such as using them for ice picks, sexual attraction or echolocation. Marianne Marcoux, a research scientist for Fisheries and Oceans Canada, told National Geographic that the tooth is covered in nerve endings and pores, which explains why it could have so many other uses to a narwhal.

They can feel their surroundings similar to how a human's broken tooth would have feeling. 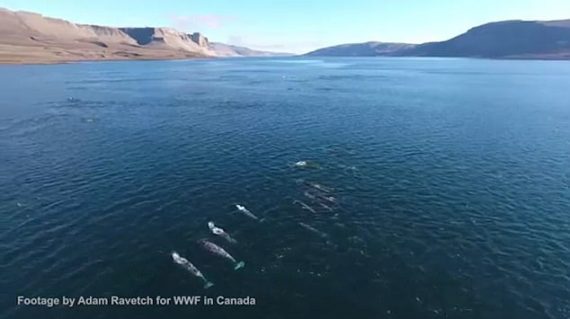 The Inuit believed the narwhal's tusk was created when a woman with a harpoon rope tied around her waist was dragged into the ocean after spearing a narwhal. She was transformed into a narwhal herself and her long knotted hair became her spiral tusk. Vikings made the tusks into alleged magical cups that would render poisonous drinks harmless. And of course, rich collectors paid high prices for them because that’s what rich collectors do.

Brandon Laforest would rather that money be spent on more drones for narwhal research.

As the Arctic warms and development pressure increases, it will be important to understand how narwhal are using their habitat during their annual migration. With this information in hand, we can work to minimise the effects of human activities on narwhal.

That sounds like a good plan … except for Arctic cod.

A Mysterious Death at the Bottom of the World