In a surprise announcement this week, NASA engineers revealed that certain probes have discovered a man-made bubble surrounding the Earth. Will extraterrestrials think it’s a spaceship or a device to harvest energy for space travel or weaponry? Do they have their own grey big-headed Dyson coming up with these wild ideas?

The engineers were using the Van Allen Probes -- two robotic spacecraft launched in 2012 to study the Van Allen radiation belts – to study man-made space weather created by high-altitude explosions detonated by both the US and the USSR during the Cold War. Wait, What? More on this later.

The probes unexpectedly found a bubble surrounding the planet made of very low frequency (VLF) radio signals coming from Earth and reaching beyond the atmosphere into space. The source of these VLF signals is deep-ocean submarines that use them for communications. Wait, wait, what, what? What kind of and how many submarines are there generating so many signals that they form a bubble around the planet? More on that later too.

Is the bubble good or bad? The existence of the bubble indicates that that VLF signals could be used to remove or at least protect us from radiation in the atmosphere. It might also be used to stop extreme space weather events. NASA thinks these are good things.

By understanding more about how VLF transmission helps shape our space environment, we learn more about this complex region surrounding us. The more we know, the more situational awareness we have to protect our satellites from natural radiation in space.

Is this a way of finding a use for the bubble to cover up the fact that we made it?

VLF radio frequencies are in the 3 kHz to 30 kHz range which make them useless for most applications. However, VLF waves can penetrate at least 40 meters (120 ft) into saltwater so they’ve become the standard for deep-sea submarine communications. Because of their large wavelengths, nothing can block them so they travel to a spot at the bottom of the ionosphere where they form the bubble which is only a few wavelengths thick. That explains the bubble but why there are enough of these submarine-generated waves to form one is still a mystery.

Then there’s the Cold War man-made space weather. According to Phil Erickson, assistant director at MIT's Haystack Observatory and co-author of a new paper on Anthropogenic Space Weather, the high-altitude military tests conducted from 1958 to 1962 by both countries had code names such as Starfish, Argus and Teak. Nuclear (yes, nuclear) explosions were detonated at heights from 16 to 250 miles to create a geomagnetic disturbance of electrically charged particles that distorted Earth’s magnetic field. Yikes!

The tests were a human-generated and extreme example of some of the space weather effects frequently caused by the sun. If we understand what happened in the somewhat controlled and extreme event that was caused by one of these man-made events, we can more easily understand the natural variation in the near-space environment. 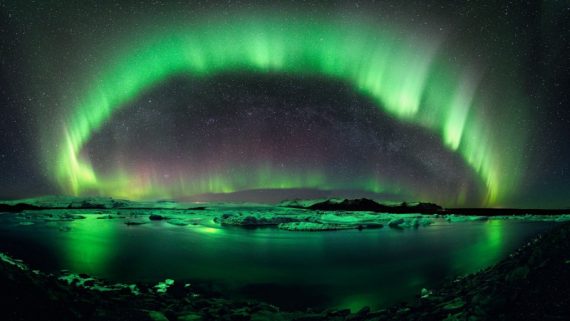 We don’t conduct nuclear tests in the upper atmosphere anymore but we’re still creating man-made phenomena which can and do create space weather that affects us down here on terra firma and there’s nothing we can do about it.

Have we opened a can of space worms?