Nessie: The Controversy of the Lack of Sightings

In his new article on the lack of recent sightings of the creatures of Loch Ness, Scotland, Micah Hanks says:

For centuries, there have been reports of a mysterious animal in Loch Ness, Scotland's most famous lake and mysterious destination (though granted, the majority of the sightings which made the lake famous occurred fairly recently, in the early and middle parts of the last century). Reports describe the beast variously resembling some kind of 'saurian' relic from the ancient past, to a creature more akin to a whale; there appears to be no real consensus on this, despite the creature's popular depiction as a long-necked, plesiosaur-like animal. Whatever the case, reports of unusual looking creatures in Loch Ness have endured over the years, though somewhat less frequently than in decades past. That is, until about eight months ago, when Nessie seems to have gone off the grid; there have been no new sightings for the better part of the last year.

The mainstream media gave quite a bit of coverage to this distinct lack of encounters. They suggested that perhaps the Nessies have finally gone the way of the dodo. Extinct, in other words. I have to say, though, that this issue of "no sightings = no creatures" is a pointless one. The lack of sightings is only troubling (and relevant) if the creatures have to surface for air - which is precisely what reptiles, such as crocodiles, have to do. Mammals, too. So, yes, if the Nessies have to surface regularly to survive, and now we're not seeing them, that could indeed be interpreted that the beasts are no more. But, what if they are eels? Giant eels. 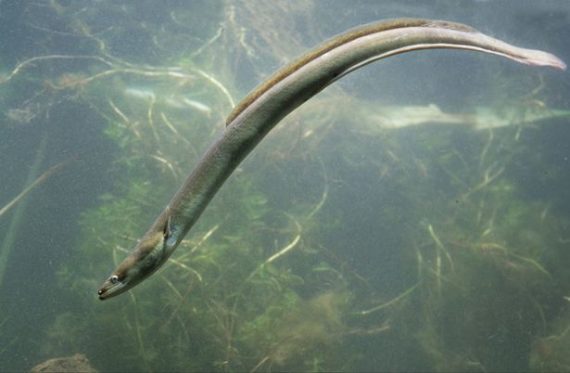 It's important to note that eels are fish. They have gills. They take their oxygen from the water. If there are giant eels in Loch Ness then, yes, they may well surface from time to time. But, the really important thing is this: they wouldn't need to surface. Ever. Is there any evidence that the Nessies are massive eels? Let's take a look.

In January 2016, there was this from ScotlandNow, on the issue of Gordon Holmes' intriguing film of 2007:

A Nessie spotter who filmed some of the most famous footage of the mysterious Loch Ness Monster has admitted it could have been a giant eel. Gordon Holmes, of Shipley, West Yorkshire, made headlines when he captured images of black shapes moving in Loch Ness from the roadside in 2007. And now the 63-year-old former university technician agrees with a US computer expert who claims his footage actually shows giant eels. His two-minute video was analysed by Bill Appleton, chief executive of firm DreamFactory, who stabilised the footage to make it clearer.

Common eels swim out to the Sargasso Sea to breed then die. The baby eels follow scent trails back to their ancestral fresh waters homes and the cycle begins again. Sometimes, however, a mutation occurs and the eel is sterile. These stay in fresh water and keep on growing. Known as eunuch eels, no-one knows how old they get or how big.

Jon Downes, who runs the CFZ, offers this: "In February 2004 two Canadian tourists came upon a 25-foot eel floating in the shallows of Loch Ness. At first they thought it was dead but when it began to move they beat a hasty retreat."

Roland Watson, who penned the excellent The Water Horses of Loch Ness, tells us that,

...it is well known that Loch Ness is teeming with eels. No one knows accurately how many eels inhabit the loch because of their behavior. This is because eels are classed as benthic or 'bottom feeders' in that they tend to live on or close to the surface of a sea or lake bottom.

Personally, I go with the idea that the Nessies have supernatural origins, but as the giant eel theory demonstrates, not seeing the Nessies is actually not a cause of concern at all.

Mass Cow Deaths by Lightning Are Mysteriously on the Rise