Leaky pipes, old paint, and broken appliances are just a few of the concerns homebuyers have to keep an eye out for when on the market for a home. One of the last things you’d expect to find in a potential new home is an unseen, mysterious tenant occupying an upstairs apartment which can’t be looked at. However, a Zillow listing for a home in South Carolina lists just that, and homebuyers across the web have been abuzz with speculation about what mysteries might lie inside the four-bedroom, three bath house.

The house's Zillow listing went viral once it was noticed and has since been changed. However, several news outlets and Twitter posts managed to capture it before it was changed. One Twitter user, Bekka Supp, seems to have made the original post about the home, calling it a “nightmare house.” 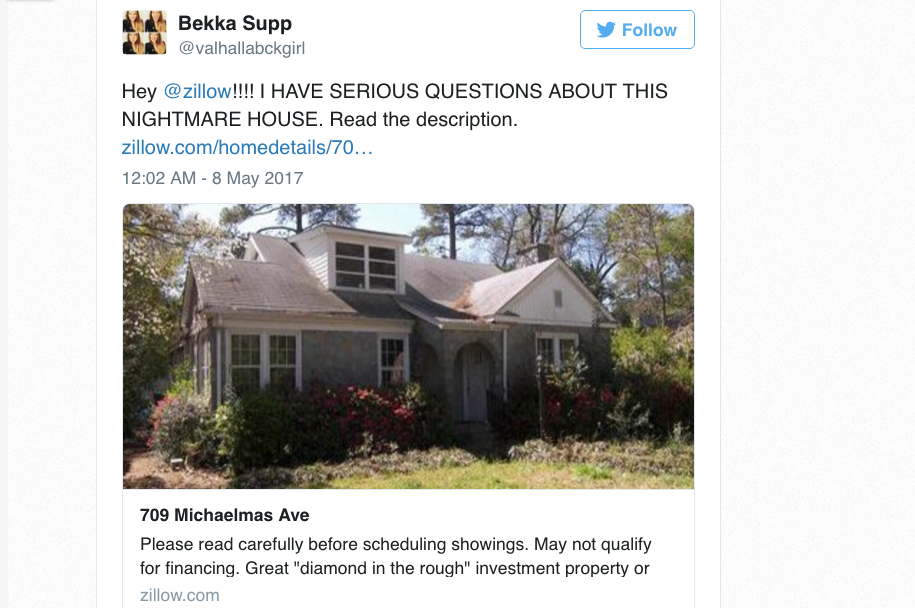 According to the original listing, buying the home comes with a mysterious set of conditions:

Upstairs apartment cannot be shown under any circumstances. Buyer assumes responsibility for the month-to-month tenancy in the upstairs apartment. Occupant has never paid, and no security deposit is being held, but there is a lease in place. (Yes, it does not make sense, please don’t bother asking.)

That description was written by Randal Longo, the real estate agent who listed the house. Longo, however, is just a middleman and hasn’t actually been to the house in person. The massive number of messages Longo received about the house forced him to change the home's description. When reached for comment by the Charleston Post and Courier, Longo claimed to know very little about the mysterious house guest:

What I know is basically what’s online. He’s got some mystery tenant up there that apparently he can’t answer many questions about, which is kind of strange.

Social media users have been speculating like crazy about who - or what - the tenant might be. A ghost? Shadow person? A crazy old hermit? Bigfoot? Who knows. One thing’s for sure: $155,672 is a steal for 2,656 square feet, mystery upstairs tenant or not.