Peruvian Family Claims to be Terrorized by Possessed Doll

Everyone has received a gift that they lose interest in but can’t get rid of for what seems to be a very good reason. The classic example is the ugly sweater lovingly knitted just for you by your grandmother who expects you to wear it to her house when you visit. Most people can put up with that – grandma usually has cookies that take your mind off of how you look. But what if said sweater itched and scratched like it was made of live fire ants – how long would it take before you broke the sad news to grandma that your dog ate it or it burned to a crisp when you used it to put out a fire and save the life of a family? Would you wear it for seven years before doing that? That’s how long it a family in Peru has kept an alleged haunted doll they received as a gift that they claim makes scary noises, moves by itself and leaves scratches and bruises on their children -- and they still refuse to part with it. Sorry, Granny … Barbie accidentally fell down an open manhole.

This story has been making the rounds after a video surfaced of a news story about the Nunez family of El Callao, Peru. The parents say they received the cute doll from a relative who has since passed away – revealing the main reason why they don’t want to get rid of “Sarita” despite her un-doll-like behavior. Ivonne, the mother, says the strange incidents began very soon after the relative died.

Every night I feel as though somebody is looking at me from the corner of the room.

That corner is in the bedroom of daughter Angie, now 20, who claims she also heard three knocks on her door or the door of the wardrobe. Ivonne claims the doll moves around at night and makes a praying sound if anyone tries to push her away. Son Steven, 18, claims to get the worst doll abuse.

Last week I woke up with scratches on my neck and on my back.

20? 18? Still sleeping with dolls … especially haunted ones? Ivonne says they brought in an "angel expert" who claimed she felt the presence of a woman and saw circles of lights when she attempted to cleanse the house. 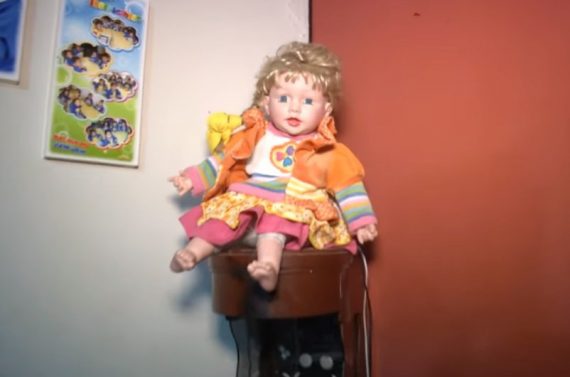 You’re thinking to yourself: the doll must be possessed by the spirit of the mysterious woman. Good guess. Ivonne admits that her sister-in-law killed herself exactly where the medium felt the presence. But that’s not the person who gave them the doll. That person’s death – identified in some accounts as a niece and others as a nephew – seems to have awakened the evil powers in the doll.

Has anyone put a camera with night vision or a motion detector in the room with the doll? Of course not. That’s just one of the holes in the story. The discrepancy about who gave them the doll is another. A photograph of the children shows kids who appear to be much younger than 20 or 18. Throw in the length of time they’ve kept the doll and their refusal to get rid of it and the story gets a little harder to believe.

Wait a minute … you don’t think the Nunezes are working on a movie called “Sarita,” do you? If they’re not, I’ve already got a first draft ready if there’s any Hollywood producers reading this.

Where There’s Smoke, There Are Monsters – And Fire