Right now, I have a new book out. Its title: The Roswell UFO Conspiracy. The subtitle: Exposing a Shocking and Sinister Secret. It's a sequel to my 2005 book, Body Snatchers in the Desert. As with my earlier book, the new one is focused on the theory that what came down outside of Roswell, New Mexico in early July 1947 was not an alien spacecraft, but - instead - one of a number of craft used in highly-classified and controversial programs of the military.

When Body Snatchers in the Desert was published, I knew that Ufology would react with a mixture of skepticism, worry, anger and thinly-veiled hate. I was right – on all counts. Just before my book surfaced, Simon & Schuster unveiled the also-then-new book from good mate, Greg Bishop. Its title was Project Beta – an excellent book which was also focused on how the UFO issue has been used to hide military secrets. As luck would have it, I was in Greg’s hometown of Los Angeles a few days after his supply of books arrived from Simon & Schuster. Greg signed a copy of his book for me with the following words: "Nick: Soon to be the most unpopular man in Ufology!" Greg proved to be quite the prophet. It wasn’t down to psychic powers on Greg’s part, however. Nope: good old commonsense was all Greg needed. He knew exactly how Ufology would greet the book.

French researcher, Gildas Bourdais, who totally loathed the book, kept me active at UFO Updates for months with his persistent posts and comments. Not that that bothered me: I enjoy a good, online fight. David Rudiak was overjoyed by the fact that by initializing the first two words of the book, he could forever refer to it as B.S. in the Desert. Karl Pflock was pissed that I mentioned in my book how, in 1993, he publicly aired his suspicions that the Roswell bodies might have been linked to "disclosures about the U.S. government radiation experiments spawned in that same era." Why was Karl so put out? I never found out. I didn't care, either. Karl said it publicly, so I quoted it. Things didn't end there.

There were a couple of researchers who weren't happy that someone might actually dare question the theory that aliens crashed at Roswell. I know this, as a third-party who was CC’d on their emails was generous enough to forward those same emails on to me. One of the emails is framed in my office. It describes me as a "venomous troublemaker." I have to admit that phrase would have looked pretty cool written in white on a black t-shirt. Then there is Kevin Randle.

Kevin and I disagree significantly on the matter of what the truth of Roswell really was / is. But, we are friends. We exchange emails now and again, Kevin has me on his radio show from time to time, and we had some interesting exchanges on the matter of the "Roswell Slides" fiasco that dominated much of Ufology of the last couple of years. We have hung out on a couple of occasions, too. And, I am pleased to say he has a fine sense of humor and, unlike certain researchers who will remain nameless, he can chat about things other than Roswell.

To his credit, Kevin did not let emotion get in the way when a constructive debate surfaced on Body Snatchers in the Desert and its revelations (I lack Kevin’s ability to avoid exploding online). Kevin read the book carefully and gave his honest opinion on it, which I respected. In September 2005, Kevin wrote an article on my book for Fate magazine. Interestingly, Kevin said: "In fact, I have told many people that if I could find evidence of an illegal experiment that resulted in the deaths of human subjects, it would be a much bigger story, at least in terms of what the journalistic community would be willing to believe."

As Kevin also noted, though: "The problem for me was the lack of anything substantial." He explained that he had carefully gone through various records from the likes of White Sands and the National Archives, but came up empty-handed on the matter of controversial tests using humans. That didn’t concern me though. You will now see why.

During the course of doing the research for my Body Snatchers in the Desert book, I spent a lot of time at the National Archives, Maryland, digging into files to determine what was going on at various New Mexico-based military installations during the summer of 1947. One of the files that I considered of potential interest - and which I still consider to be of potential interest - originated with Holloman Air Force Base, New Mexico and was titled "Holloman Air Force Base Range Safety, 1947-1959."

Prepared in 1960, it makes a number of intriguing statements:

The handling of range safety problems at the Air Force Missile Development Center, Holloman Air Force Base, New Mexico, has passed through three distinct phases. From the establishment of the Air Forces guided missile program at Holloman until the integration of the Holloman and White Sands Proving Ground test range in September 1952, Holloman was responsible for safety aspects of all its tests, including rocketsonde and balloon flights and research and development drone tests as well as missile tests in the narrow sense. Naturally there were many occasions for close coordination between the Air Forces at Holloman and the Army at White Sands on range safety criteria and procedures, for instance when the flight pattern of a missile took it over both of the adjoining test ranges.

Then, there was this statement: "Little information is available on specific events with regard to range safety during this period [italics mine]." If, as this document demonstrates, by 1960 even Holloman’s very own historians had "little" access to the history of the early years of research and safety issues at Holloman and its links with activities undertaken at White Sands (both in New Mexico), then the idea that such a monumental story as the Roswell affair could remain successfully buried for decades seemed, to me, not so unusual after all. 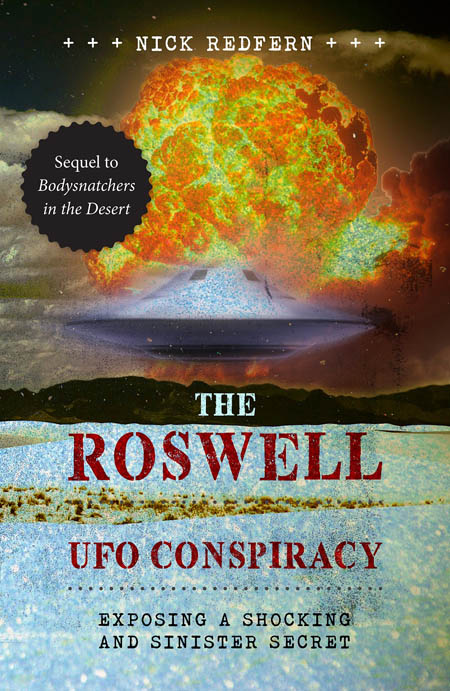 And, now, twelve years after Body Snatchers in the Desert was published, The Roswell UFO Conspiracy will likely provoke similar responses to those which surfaced back then. Why? In part because the Roswell stakes are so high. If Roswell is one day proved to have been an extraterrestrial event, the community will be celebrating significantly - and rightly so. After all those years of seeking the truth, it finally surfaces.

On the other hand, if the collective data in my two books proves to be correct, and Roswell collapses (as a UFO event, at least), I'm not at all sure that Ufology will continue as it does right now. Building Roswell up to the point where it is seen as the most important UFO case of all time is a very risky thing to do. As the phrase says:

The bigger they are, the harder they fall.

Strange Military Encounters with the Jinn