Shoe With Severed Foot Inside Appears on Dock in South Carolina

A strange and grisly discovery recently turned up on a dock in Charleston, South Carolina, which has area police looking at records of deaths and boating accidents: a size nine Adidas sneaker, with a human foot still inside.

According to a report featured at Police One, the original police report described that a Charleston area woman had contacted the city Marina, telling employees there that the shoe, which appeared to have a bone protruding from the top, had been sitting on the dock for several days.

Police responding to investigate determined that a severed human foot was indeed still within the shoe, which also wore a black sock.

According to Charleston County Coroner Rae Wooten, records of boating accidents that may have occurred in the area, as well as any reports of missing people, are being considered. However, nothing links any crimes or accidents to the mystery foot at the present time.

Similar incidents over the last several years have occurred, notably a collection of more than a dozen along the Pacific Northwestern Coast, which became known as the "Salish Sea human foot discoveries."

Speculation about the cause of the apparent rash of human foot discoveries, still wearing the shoes of the apparently missing individual, were fueled in 2008 by an article appearing in the the Toronto Star, which reported:

“Speculation ranges from natural disasters, such as the tsunami of 2004, to the work of drug dealers, serial killers and human traffickers.

“One theory concerns a plane crash off Quadra Island three years ago with five men aboard. Only one of the bodies has been found.

“Other theorists believe the coastline is being used as a body dump for organized crime activity; a third scenario is a serial killer is at work.”

Last February, the Washington Post reported on the mystery, noting that, "In British Columbia, two of the feet have since been identified as having belonged to people with mental illness, while three others were linked to individuals who probably died of natural causes." Researchers also note that in the event that a body is carried adrift on seawater, disarticulation is likely to occur with hands and feet before most other portions of the body.

Gail Anderson of Simon Fraser University in British Columbia, noted in 2011 that there were conclusive reasons behind the deaths of many of these individuals. “All of the ones who’ve been identified so far, there’s no mystery. These people were very depressed, unhappy about life, and were last seen heading toward the water." 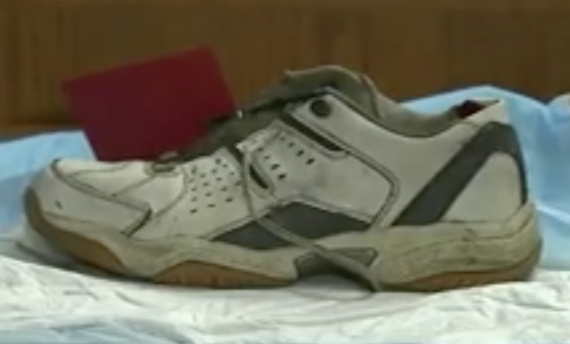 Some have further questioned whether there could still be connections between why so many severed human feet, still in their shoes, were turning up along the coast of the Salish Sea only since around 2007. In other words, why hadn't there been more previous reports of similar incidents? Or could it be that there had been, but that the more recent spate of reports were being more greatly emphasized by the media, in the "copycat" phenomenon where sensational headlines tend to be followed by similar, attention getting reports that can be linked, albeit tenuously, to similar news items?

As for whether a deliberate disappearance, a boating accident, or some other incident can be linked to the "mystery foot" of Charleston, South Carolina, no further information has been released by law enforcement at the present time.