The Cursed Devil’s Pool of Australia

Are there evil places in this world, ones that have an insidious yearning to pull in victims to their doom? Can there be some sort of energy that permeates a place to make it a cursed place inhospitable to outsiders? There are locations upon this planet of ours that ask these questions, imploring us to ponder such things with the web of strangeness and death they weave. One such locale is a rather famous tourist location, which under the veneer of its natural beauty and intoxicating natural splendor holds tales of ancient evil and modern horror.

Out along the Bruce Highway, 60km south of Cairns, in northern Queensland, Australia, three streams rush down from atop Mt. Bartle Frere, meander through untouched rainforest wilderness, and converge among some large boulders near a nondescript town called Babinda. What has come to be known as the Babinda Boulders are well-known for the inviting, crystal clear waters of the streams and the idyllic, picturesque natural beauty to be found all around, which have served to attract droves of tourists to the spot every year. However, what many of the photographers, campers, and hikers at this peaceful spot, as well as the swimmers wading through calmer portions of the pool might not be aware of is that the site goes by another, far more ominous nickname of “The Devil’s Pool,” and has been feared by the Aborigines of the area for centuries, perhaps with good reason, as this is a place long steeped with death, foreboding, and a dark reputation.

The native people of the area have long shunned the deceptively quiet pool, and one Aboriginal legend is particularly tragic. According to the dark tale, there was once a young, beautiful woman from the Yidinji tribe named Oolana, and this maiden married a respected tribal elder named Waroonoo. When she met a handsome younger man from another tribe she set forth into a torrid affair, running off away into the wilderness with her newfound lover. Unfortunately for her, Oolana’s husband was a powerful man within her tribe, and he sent out search parties to hunt the pair down to put an end to their adulterous tryst. When they were finally surrounded and separated at the Babinda Boulders, Oolana is then said to have thrown herself into the water and drowned rather than face a bleak life without her true love. According to the Aboriginal tales, she has never really left, and still prowls these waters, looking to lure young men to a watery grave.

This legend has become notable in light of the fact that over the years a large number of young men have mysteriously met their deaths here, and since 1959 at least 17 people, and more still in old newspaper clippings, have drowned here under decidedly strange circumstances. In many cases the victims are said to be forcefully pulled and held under as if by unseen hands. The site is said to be particularly aggressive towards men and those that disrespect the pool in any way. In one story a young man visiting the area took a kick at one of the signs there, after which he slipped, fell into a deep pool, and drowned. Other mysterious deaths here are not as clear, such as that of 24-year-old Peter McGann, who in 1979 was climbing up a boulder, jumped a small gap, and slipped to go tumbling into the water below, after which he simply vanished without a trace. It would take teams of divers over 5 weeks to finally find his body lodged down in the murk at the bottom of the pool. One rescue worker who helped in the search, police diver Peter Tibbs, explained the scene thus:

I've been called on four times to try and find bodies down there but one of the most interesting of the cases was a young fella called, Patrick McGann.We thought we knew he was in there, but we couldn't get to the body because the water is so cold, it's so deep and it flows so fast. And so eight or ten times we went down and we eventually cut the logs out of the place underwater and on the last day after we'd almost given up, we cut the last log that was in the chute and the body floated freely. And that was five weeks and five days from the time he'd gone missing, so it wasn't a pretty sight, but it was a great relief to get the body out and satisfy the family.

There was also the case of a young couple that was swept away by a freak flash flood at the site as they were taking in the view, with the woman surviving but the man never heard from again. Perhaps the most recent and dramatic account of a mysterious death at the Devil’s Pool is that of 23-year-old Tasmanian naval seaman James Bennett, who had been out for a day exploring the area with some friends in 2010. The group had jumped over a safety railing to sit in a natural tub of churning water known locally as the “Washing Machine.” According to one of James’ friends, he had been swimming in a calm area nearby when he was suddenly and violently yanked backwards, as if by “an invisible hand,” which seemed to be dragging him back towards a section of churning white water at the back of the pool. James then allegedly reached up to grab a branch, which snapped, after which his head went under water and he just struggled there suspended helplessly in the water for no apparent reason, with just the tips of his fingers protruding from the surface as he struggled to come up for air.

He would remain like this while his friends tried to reach out to him and offer their extended legs, before sinking down into the depths to his fate. It would not be until 3 days later that the body of James Bennett would be found floating about in a calmer section of the stream, and a plaque would be erected in the aftermath, eerily reading “He came for a visit and stayed forever.” Most of the area is now closed off, although the inviting locale constantly draws visitors in.

Such tragic incidents are so plentiful that the area has had numerous railings and warning signs set up over the years to denote the places that are safe for swimming. Why so many have suddenly drowned in the mostly calm pools here depends largely on who you ask. Officials will tell you that it is all due to fast running water, freak flash floods, or untamed currents stirred up by the natural lay of the stream and the boulders dotting it. This could in turn pull people under and pin them against the rocks or wedge them under sunken logs, drowning them in a fashion that could quite possibly be witnessed as some sort of mysterious, unseen force. The high oxygenation of the water here also does swimmers no favors, and all of this is said to make the conditions in the off-limits areas difficult for even the most experienced swimmers to navigate. Indeed, even the divers that have entered the pool to look for bodies have been met with harrowing water conditions at times, despite typically being solidly tethered to the land by rope. One local official said of the dangers of the pool thus:

They call it the Washing Machine where he went in because it goes around and around. It’s all bubbles so there is no buoyancy. It’s dangerous water. It sucks you under. You always see people swimming in the dangerous holes. You don’t know when a flood could come down from up top. 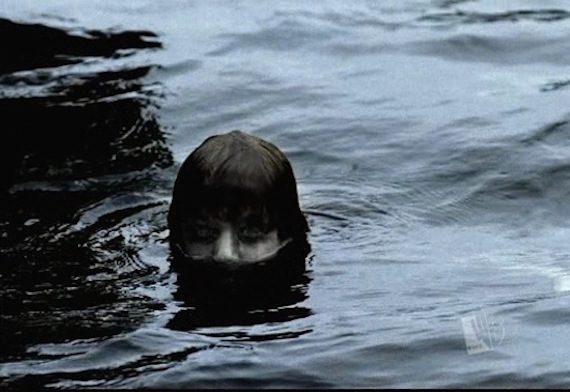 However, others point to the fact that not all of these deaths were the result of actually swimming, with some suddenly slipping and falling into the water for no reason, and almost all of them were male, 16 out of 17 of the official count, to be exact. This is said to be telling evidence that perhaps the Aboriginal legends about the pool are perhaps true, at least to some degree, and only adding to this mystique are the varied reports of a disembodied woman’s voice calling out into the night and even pictures that claim to be of ghostly eyes, faces, and other unexplained images lurking under the water here. A picture taken of the site by the father of one of the victims was described thus:

When the father came down, the police took him out and showed him where he went down. And he took the photo of that. And he came back and they showed him where they had him tied up there. And when he went over to Innisfail the next morning to get them developed, that’s what they found. That photo, he’s even got the cigarette in his mouth.

Here we have an old myth intertwined with modern ghost stories and strange deaths, making it hard to really pick apart what could be real and what is all pure lore. Whether one believes the straight legends of a dead village woman or not, it is hard not to wonder whether this might just be one of those places that seems to be infused with some sort of negative, malicious energy. Is this all the result of natural phenomena, a ghost, or something else? It remains unknown, but something to think about if you are ever looking to take a dip at this mysterious place.