The Song of Solitude: A Mysterious 52 Hertz Call From the Deep

Toward the end of the 1980s, and with the Cold War era coming to a close, a number of deep sea hydrophones (that is, underwater microphones) once used for spying were getting a new lease on life. Specifically, they were being repurposed by agencies like NOAA for use in oceanographic studies.

By the middle 1990s, researchers had indeed gathered some unique audio, some of which had become the stuff of legend. Arguably, the most famous of all these "mystery noises" had been "Bloop", an underwater noise of mysterious origin that, according to some biologists, seemed to have the acoustic hallmarks of a living creature.

Further adding to the mystery is that the sound seemed to emanate from out in the remote Pacific, roughly gauged to be around the oceanic point furthest from any land mass on Earth (this is sometimes called the "Nemo point", or the pole of inaccessibility, amidst other names). H.P. Lovecraft famously used this location for his fictional sunken city of R'lyeh in The Call of Cthulhu, further heaping the folklore onto NOAA's alleged find.

I say "alleged" here because there just isn't much in the way of proof that "Bloop" had ever been any kind of living thing, and at the time of its discovery in 1997, it had already been an item of dispute as to whether a living creature could have made the noise. At least as recently as 2002, there were some advocates of the "giant marine animal" hypothesis, although NOAA has concluded (as many thought back in the late 90s and early 2000s) that the source of the noise was likely due to a large icequake. Cthulhu, in other words, wasn't really wobbling around out there in the Pacific somewhere, drunken and dreaming in an ancient underwater city.

This isn't to say that there weren't other interesting things that have turned up over the years, as a result of the unique signatures picked up by deep sea hydrophones. In fact, one of these noises has remained a genuine mystery.

Back in December 1992, an unusual variety of whale song was recorded, which seemed to be registering at a very unusual frequency of 52 hertz. To give perspective, what might be deemed "typical" for a blue whale would register between around 15 and 20 hertz, which is essentially imperceptible to the human ear (we might actually detect it as a sort of low rumbling). 52 hertz, by comparison, is very high pitched. 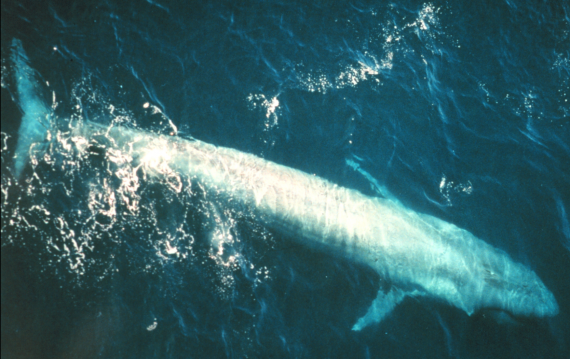 It might have been considered some kind of anomaly, or a one-off perhaps, if not for the fact that this unusual whale and its high-pitched song continued to turn up over the ensuing years, following its discovery by researchers as the Woods Hole Oceanographic Institution. The burning questions were, of course, what kind of whale was singing in this way, and perhaps more importantly, who was its audience?

The whale's acoustic signature is most similar to a blue whale, although fin whales, who broadcast at 20 hertz (as compared with the lower 10 to 15 hertz songs of their blue whale cousins) would also qualify as a likely candidate. However, due to its similarity to other known whale species, there have been critics that argue against the anomalous nature of this unusual whale and its signature song. Christopher Willes Clark of Cornell University, in particular, has been a vocal skeptic of the idea of a "mystery whale."

"Many types of idiosyncratic whale calls have been detected," he told BBC Nature in 2015. "Some studies suggest that groups of whales living in particular regions have dialects. When you consider that, the 52Hz whale is not completely mind-bogglingly unique."

Hey, even if the big takeaway here were only that different whales, residing in different places, also appear to have discernible "regional dialects" like humans do, that in itself is pretty unique!

Whatever the case, the unusual song of this elusive whale has garnered it the nickname of "the world's loneliest whale," inspiring songs, documentaries, and even music which has been inspired by the creature's enigmatic, high pitched vocal prowess. Even though its song registers well outside the range of what can be enjoyed by the human ear, obviously it has been influential enough to garner attention from those with inclination toward the arts.

New Film Suggests Marilyn Monroe Was About To Reveal Aliens