The California coastline has a long history of visits by alleged “sea monsters,” dating back more than a century. The famous “San Clemente Monster” was one such creature, which began to appear in the early 1900s. Later in 1925, a bizarre animal carcass that washed ashore near Moore’s Beach in Santa Cruz further stoked the fires beneath legends of “monsters,” though today it is understood that this mystery beast had, in fact, been a variety of beaked whale.

Reports of creatures like these have continued until more recent times, although many of the “monsters” of yore are taken to have been something that, while unusual to see at the time, are widely recognized species by today’s standards. In 2013, a news report described the discovery of a pair of oarfish along the California coast thusly:

"The rarely seen deep sea-dwelling creatures, which can grow to more than 50 feet, may be the inspiration of sea monsters found in literature and throughout history. Photos of the oarfish have circulated widely online, spurring general interest in the mysterious creature but contributing little to scientists' knowledge of the fish."

Strange though they are, the oarfish isn’t a truly “mysterious” creature, especially when compared with reports of unusual, and at times very large, unidentified animals, which have been reported along the California coast within just the last few decades.

Such an occurrence reportedly took place a little north of San Francisco on Halloween in 1983, involving a large, hump-backed creature that was seen rollicking playfully in the waters off of Stinson Beach. As to whether the definitive features here were indeed humps, or perhaps merely coils on some long, writhing serpentine figure, might remain a matter of perspective, but without further delay, here are the facts:

The initial sightings occurred on October 31, 1983, shortly after 2 PM, when a group of five construction workers said they observed a large creature swimming in the direction of Cliffside road, where their present operations were underway. The animal, they judged, had been close to 100 feet in length, and appeared to be swimming 100 yards off shore.

One of the workers, a flagman with the operation, procured a pair of binoculars to observe the creature. According to a November article appearing in the San Francisco Chronicle, another of the observers, Matt Ratto, said the creature appeared to be approximately one quarter mile away.

Ratto gives us the following description of the creature:

The body came out of the water first… it was black with three humps. There were three bends, like humps and they rose straight up…. [it was a] humpy, flat-backed thing.

Ratto’s description of something “humpy,” yet flat-backed is rather unusual, although it might have been difficult to discern precisely what the physical characteristics of such a creature might have been, considering the distance, paired with possible distortions its mode of locomotion might have presented. 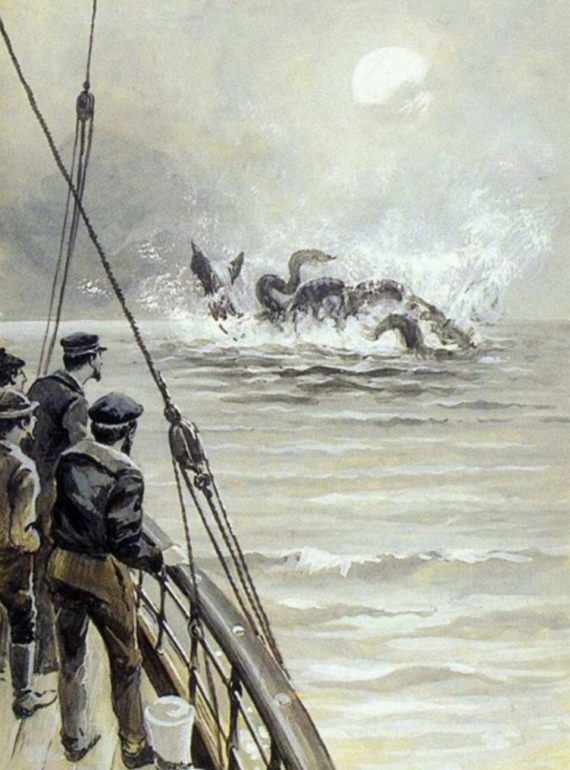 Other witnesses with the construction team noted how fast the creature appeared to be moving. "The sucker was going 45 to 50 miles an hour," Steve Bjora told reporters following the incident, saying, "It was clipping. It was boogying. It looked like a long eel."

A safety engineer on staff with the crew, Marlene Martin, also watched the creature. However, there are conflicting reports about her testimony (more on that in a moment). For the time being, let's examine what she is reported to have said about the creature:

"It shocked the hell out of me… It was hard to describe how big it was. I have no creative imagination. It was a snake-like thing that arched itself up and was so long it made humps above the water. It had a wake as big as a power boat's and it was going about 65 miles an hour. It looked like a great big rubber hose as it moved. If someone had gotten in its way it would have plowed right though them. It was like it was playing… [it was like a] giant snake or a dragon, with a mouth like an alligator's. It was at least 15 or 20 feet in circumference, but it was hard to tell how long it was. I mean, how long is a snake? He should have the whole damn ocean. It's his territory. He's the King of the Sea!”

"That thing's so big he deserves front page coverage,” she apparently told her interviewers.

However, according to some sources, Martin had been unwilling (initially, at least) to speak about the incident, due to fear of ridicule for publicly discussing something so seemingly far-out as a monster sighting. In an article by Tom Hamilton that chronicles the incident, "Transportation safety inspector Marlene Martin reportedly also rubbed her eyes at the sight of the massive snake, but, perhaps fearing that she would be fitted for a straight jacket, refused to discuss it publicly. Her daughter however, admitted that her mother was counted among the believers and that she relayed the story back to her, calling the serpent quote; 'The biggest thing she had ever seen'."

So had the earlier quote, attributed to Marlene Martin, actually appeared later, once she "warmed up to the idea," or had it been a misattribution altogether? Or, as the quote directly above seems to suggest, might some of the testimony have been relayed by Martin's daughter?

Books that have featured this quote over the years reference an article that appeared in the San Francisco Chronicle in early November, 1983. However, visiting the publication's site today, while individual articles from past editions can be searched for and purchased for less than $4, the archived articles go no further back than 1985. (If possible, I hope to contact their records department about this, or alternatively, see if the archived article is available via another online newspaper archiving service, to get clarification on this minor discrepancy).

These kinds of minor issues do often turn up within the context of cursory examinations of the unusual... it thus becomes difficult to distinguish "real" reports of such creatures from the folklore that often surrounds them. Granted, it seems doubtful that the entire incident involving the Stinson Beach Monster was entirely fabricated; obviously, it would seem that something was observed by this group of construction workers back in 1983, and perhaps it was one of a similar variety of serpentine creatures reported in the region over the course of the last century. 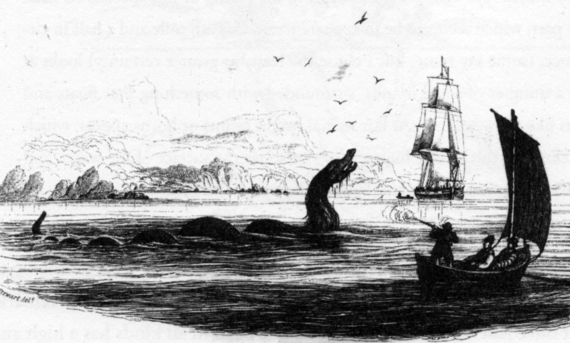 On a personal note, I still find the discussion of sea monsters to be a fascinating one, particularly when it comes to such things as the possible existence of giant eels (and remember that Steve Bjora, one of the Stinson beach witnesses, described it as resembling a very large eel). Presently, there are no known records of eels exceeding more than about 15 feet in length, and despite the fascination incurred by incidents such as the famous six-foot-long eel larvae brought up aboard the research vessel Dana in the 1930s by scientist Anton Brunn (which turned out to be a young spiny snub-nosed eel, rather than an actual eel larvae or leptocephalus), there seems to be little in the way of scientific evidence for such massive creatures.

Nonetheless, if larger, as-yet undiscovered creatures do exist out there in our world, it seems evident that they will most likely turn up in our oceans. Perhaps we shouldn't close the book on these sea serpent stories after all, eel or otherwise.