This Tiny Japanese Island is for Men Only

A tiny island in the Sea of Japan is about to be given UNESCO (United Nations Educational, Scientific and Cultural Organization) world heritage status. That’s normally a cause for celebration – it means the location will be protected by international laws because of its unique archaeological and religious heritage. However, this one is causing some controversy because the little island is restricted to men only, and the new designation will not change that. Does Wonder Woman know about this?

The tiny (240 acres) island of Okinoshima is part of the city of Munakata, Fukuoka. It lies off the coast of southern Japan on an ancient trading route with Korea, and that’s where its interesting, albeit restrictive, heritage unfolds. Beginning in the fourth century, Okinoshima was a stopping place for sailors – especially from the Munakata people -- embarking on East Asian trade excursions. Believing the island to be sacred, they left offerings to the Shinto gods for protection, a practice that continued through the ninth century. Today, there are over 80,000 beads, weapons, swords and other gifts on display there and the Japanese people consider them to be national treasures. 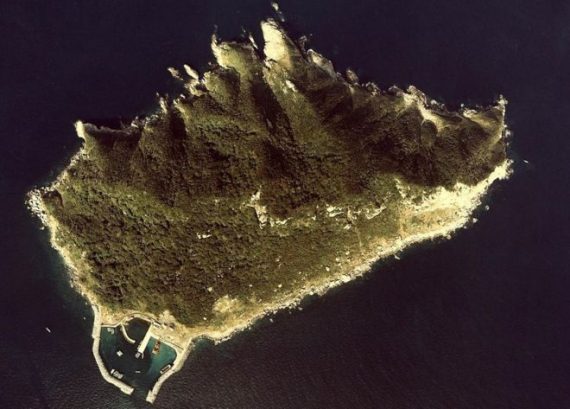 At some point, Okinoshima came under the ownership of the Munakata Taisha Shrine and that’s when things started to get restrictive. The island has only one full-time resident, an employee of the shrine, and it’s his job to make sure only men – specifically, male priests – visit the island. It’s his job to watch the Shinto priests strip naked and perform a purification ritual before setting foot on Okinoshima. That first part also allows him to verify that none of them are women. Women are banned from the island because of menstruation, which the Shinto believe is a sign of impurity. This does not include the three empresses given to Japan by the Shinto gods to reside there and protect the nation. Their presence now is in an enclave of sacred boulders.

The religious history – not the female ban – is just one reason why UNESCO is giving Okinoshima world heritage status. The island is also home to rare wildlife such as the endangered Japanese murrelet. An estimated 30 breeding pairs of the birds remain on the island and they’re threatened, like all of the other birds on the island, by predatory rats. It’s hoped that the protected status and the resulting increase in tourism will highlight the problem and bring in money to remove the rats.

As of now, the tourists – even if they’re world-class rat-killers – will not include women. A US-based Hindu group is protesting the designation unless women are allowed on the island but has so far failed to stop it. If it’s any consolation, there won’t be many men allowed on the island either. Outside of an annual festival in May when about 200 men visit, the murrelets and rats are expected to see a few priests, a few male tourists, a few rat killers and the one lonely guy who guards the island. Local government officials say they hope people use “common sense” and respect the restriction.

What about female sailors?