Vikings May Have Cremated and Buried Their Houses

Does a house have a soul? That question may sound absurd today (unless you’re a real estate agent looking for ways to move a fixer-upper), but a new analysis of Viking burial sites finds that the Nordic seafarers appear to have cremated and buried their houses much as they buried their dead, possibly in the belief that the practice would liberate the essence of the house.

It has been known that Viking burial mounds for humans were often placed on top of three-aisle longhouses – the common long single-room buildings that housed families and livestock in various cultures around the world from the Bronze Age to the Viking Age. In an article in the European Journal of Archaeology, Marianne Hem Eriksen -- a Postdoctoral Fellow at the McDonald Institute for Archaeological Research/University of Oslo – describes a puzzling aspect of some these mounds

I studied seven different house burials from the Iron Age in Scandinavia, in five different locations: Högom in Sweden; Ullandhaug in Rogaland; Brista in Uppland, Sweden; Jarlsberg in Vestfold; and Engelaug in Hedmark. In some cases we have been unable to find human remains, even in places where we could expect such remains to have been preserved. Nevertheless, archaeologists have more or less implicitly assumed that somewhere or other, there must be a deceased individual.

Eriksen presents a number of reasons why she believes these burials were for the house, not a human. For starters, she points out that, despite the massive upheavals in Viking countries at the time, the structure of the Viking longhouse remained virtually unchanged for 3,000 years. Because the houses were passed from generation to generation, often for centuries, the house may have been seen as a link to their ancestors. This could have been a spiritual link, but it could also have been a political one, especially if their ancestors were powerful. Also, in cultures without a written language, architecture is used as a way to record history.

Another hint that the houses may have been purposely buried lies in how the mounds were built over them. In some cases, the mounds were placed above the door of the house, perhaps as a way to symbolize its final closure.

The word “window” comes from wind and eye and refers to openings in the walls where the wind comes in. The word “gable”, i.e. the top of the end wall of the house, means head or skull. 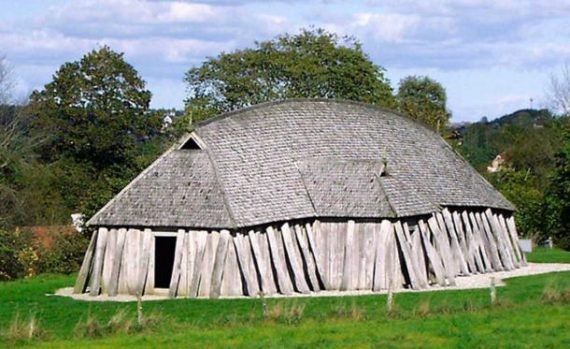 The final ‘nail’ in the house burial theory is the fact that the longhouses were burned or cremated – the well-known form of Viking burial. Eriksen suggests that, just as with human funerals, the cremation may have been done to “to liberate the life force of the house.” In fact, it may have been a way to keep the houses connected with their centuries of residents.

If houses and people could be part of a network that had “agency” – vitality and personality – this could at least be part of the explanation for the longevity of longhouses in Scandinavia.

Do you believe houses have a soul or an essence? Are they linked in some way to the people who have lived in them? Or was George Carlin right – they’re just a place for our stuff?