UFO cults - and particularly controversial ones - are nothing new. In fact, they are ten-a-penny. Some are far more well known than others. Take, for example, the Heaven's Gate crowd. Remember them? "Thanks" to their nuttier-than-squirrel-shit leader, Marshall Herff Applewhite, Jr., they came to a sticky and irreversible end in March 1997, after knocking back significant amounts of Phenobarbital and vodka. A word of advice: do what I do and stick to a few cans of Steel Reserve on a Friday and Saturday night. There was also the Cosmic Circle of Fellowship, which was established in the 1950s by the allegedly dimension-hopping William Ferguson. Both Unarius and The Seekers can also be added to the list. In fact, the list is a long and winding one.

One such cult, which has largely been forgotten, is the subject of today's article. It was in the 1940s that one Francis Herman Penovic – who went by the very different name of Krishna Venta – created what was popularly known as the Fountain of the World. Its official title, however, was WKFL Fountain of the World; the "WKFL" meaning "Wisdom," "Knowledge," "Faith," and "Love." It was a pretty harmless group (for a while...), albeit one that eventually had its moments of violence and even death. 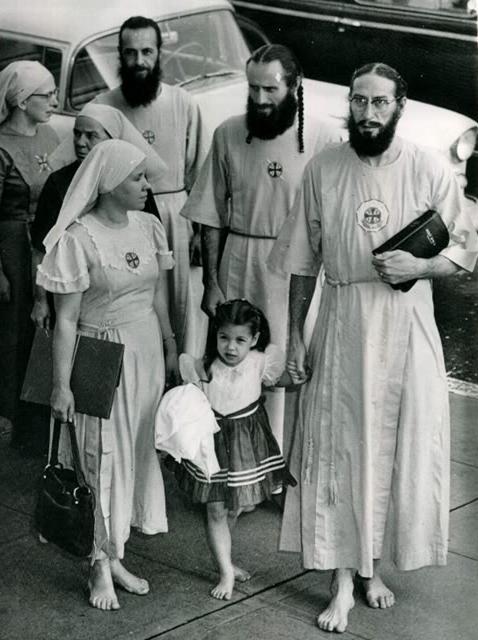 The Fountain of the World had its base of operations in Simi Valley, California. And it thrived very nicely – which is hardly surprising, given that those who chose to join the cult were required to hand over their entire belongings and life-savings. Members were also made to wear what became the de rigueur WKFL Fountain of the World uniform. Namely, robes and sandals. Or, as I term it, hippy crap. Worse still, male members of the group were told to grow beards. Even more hippy crap, in other words.

The group was very much a benevolent one, working to improve conditions for the homeless who lived on the streets in Simi Valley – usually by offering beds and food at the Fountain of the World headquarters. Without doubt, the most visible example of the WKFL Fountain of the World's determination to help whenever and wherever it could surfaced on July 12, 1949. That was the date on which a Standard Airlines aircraft slammed into the Simi Hills, killing around three-quarters of all those on-board. The WKFL Fountain of the World were quickly on the scene to try and lend whatever help they could.

Like so many cult-leaders, Venta had delusions of grandeur. Just one year before the tragic crash of Flight 897R on the Simi Hills, he proclaimed: "I may as well say it: I am Christ. I am the new messiah." UFOs even came into the story. Well, of course they did! Venta / Jesus maintained that he had spent time on a planet called Neophrates and had commanded a veritable armada of spacecraft from Neophrates to the Earth. And as is the case with so many cult-leaders, it all ended violently. But, you knew that was coming, right?

On December 10, 1958, two men – Ralph Muller and Peter Duma Kamenoff, both of who were ex-members of the Fountain of the World, and who correctly believed Venta had been banging their wives – planned to go on a suicide-driven bombing mission to kill Venta. Unfortunately, they succeeded. The crazed, irresponsible pair caused chaos, tragedy and death - and on a large scale. The Los Angeles Times reported one day later:

The Fountain of the World Monastery in a wooded canyon near Chatsworth was ripped apart early yesterday by a heavy explosion which instantly killed the bearded leader of the cult, Krishna Venta, and seven of his followers. Two ex-cultists linked to the blast by bizarre tape recordings in which they vowed 'to bring Krishna to justice' were believed to have also died in the explosion. Two children, both girls, ages 8 and 9, and a 59-year old woman were seriously burned. The explosion blew the roof from an adjoining dormitory for children and touched off a brush fire that swept over 150 acres. Fire completed the destruction of the monastery and dormitory.

The heyday of the Fountain of the World was abruptly - and fortunately - at an end. After years of languishing in obscurity, it finally closed its doors in 1975. Good riddance to the group - and to beards and sandals, too.