A Menacing Old Man In Black

The following account, from Terry – of Shingle Springs, California – is without doubt one of the most chilling MIB-themed reports ever to have reached me. And, taking into consideration the large number of reports I get on a regular basis, I don't state those words lightly. Terry tells a fascinatingly weird and creepy saga of a face-to-face encounter with an old and sinister man in Black forty years ago. In Terry's own uninterrupted words: "This encounter occurred during the day time thirty five years ago in 1977 at a Winchell’s in Sunnyvale, California, I was just sixteen years of age at the time. My best friend and I had just finished our coffee and were heading for the doorway to leave. As we were passing a man seated at one of the tables, he reached out and firmly grabbed my wrist. In that moment my first reaction was to jerk away from his grip, but looking down at him I realized that he was a very old man and I felt in that moment that he was harmless. He was dressed in black wearing an old fashioned hat and suit, his clothing looked like it was from the 1930’s. He was extremely pale, very thin and appeared to be very old, I guessed in his 80’s or 90’s.

"He told my friend and I that he was a palm reader, a very good one, he claimed and could he please do us a favor by giving us each a reading. My friend and I talked briefly to each other about his offer and agreed to let him. I first sat down across the table from him, then as my friend was starting to sit down along side of me, he stopped her and asked her to please go sit a few tables away out of earshot from us, explaining that the information was going to be direct and personal, we would need some privacy. She complied and moved several tables away.

"Once my friend was seated away from us, I placed my hands on the table in front of him, palms up and looked into the man's face, it was then that I noticed the old man's eyes were completely glazed over with cataracts, he was surely blind I thought, as his gaze was unfixed and unfocused in my direction. I asked him how long had he been a psychic? He responded by saying that his ability had nothing to do with being psychic and emphasized that it had everything to do with 'science.' 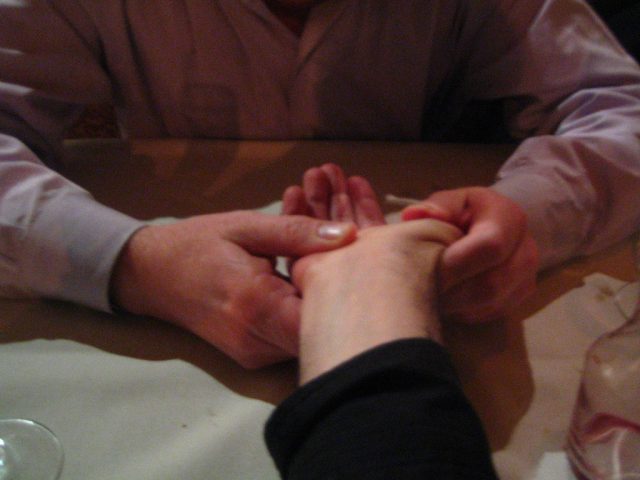 "He began by talking about my early childhood experiences along with some very painful incidents that had occurred to me in which he had precise and detailed information that I was sure no one could have known about. Quite suddenly I felt very vulnerable and exposed as he recounted these events, his knowledge unnerved me to my very core. Staring straight ahead he moved along into my present situation, lecturing and chastising me like a father would a child, for some poor choices I had made during that time. All the while he broke a doughnut down into tiny pieces. My mind raced as I tried to figure out how on earth could he know this stuff? It was then in that moment that I would forever change my ideas of 'secrets kept' and how I viewed my own identity in the world. Apparently 'nothing' could be hidden from myself or anyone else for that matter. I felt naked in the truth.

"He continued this reading now delving into my future and that of upcoming world events, with stories sometimes so harsh and brutal that I clearly remember wondering if I would ever 'catch a break in life?' Among other things, he warned me of a time when that by speaking about my UFO experiences I would anger 'the governmental powers that be' and he cautioned that I would be dealing with very dangerous people and circumstances. He rambled on often emphasizing again that this all had to do with 'science.'

"I then asked him if he could see any kind of success coming to me, ever? He responded by telling me, 'You will not find success in life, you will die of a broken heart. It will be a better stronger woman who will be successful.' As I listened to his words I began to cry and he sharply asked me, 'Are you going to lay down and die like a frightened whore, or are you going to be willing to stand up and fight like a worthy warrior?' I was stunned into silence and then he said, 'Whether you realize this or not, I have done you a huge favor today and I will be returning to see you in the future, years from now to collect on it.'

"As a side note, I do not recall the exact time he said, but do recall thinking 'You’ll be long dead by then old man.' Our reading ended, he asked me to leave the table and he then waived for my friend to come over to sit with him. He spent all of five minutes with her and when she arose from the table she was badly shaken and would only say that she hoped that what he predicted for her was not true.

"As we exited the doughnut shop I tried to press my friend for more information because she was crying, but she was too upset to speak about what he had said to her. Once out on the street the both of us walking together toward home, my friend asked me to tell her about what the old man said to me in my reading with him, she pointed out that the reading he gave went on for an hour and forty five minutes with me. I was lost for words when she spoke up and said, 'Linda I don't think he was a person, I think that old man was an alien.'

"Right in that moment as she was speaking we watched as an old black 1930’s or 40’s gangster type car with running boards pull out of the parking lot and pass us on the street, there was no driver at the wheel and the same old man that we had met, was riding in the back seat. Our mouths dropped as we watched the car pass by us and at the same time a whirlwind picked up and swirled around our feet. We watched the car disappear from view making a turn further down the street, I then shook my head and responded to her with 'No, he was just a creepy old man in black.' 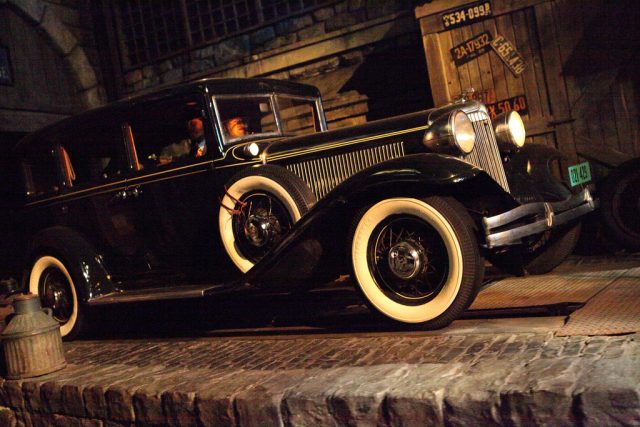 "Over the years during the course of our friendship my friend and I would many times ponder and question our meeting with 'the old man in black.' We could not understand who or what he was and neither of us would reveal to the other exactly what his frightening messages to each of us separately were, agreeing only that we felt that he was speaking the truth and that it was frightening for both us. We would part ways and our friendship ended in 1988 when I came out to her about my lifelong UFO experiences and the old man's messages to me. She mocked and ridiculed me in that moment. It was a very painful ending to our relationship for me. I would struggle with it for years.

"In 1988 when I began to seriously study the UFO phenomena I came across stories about these Men in Black, Master Tricksters and the like. It was then that I began to understand who and what they are and how this 'old man in black' specifically related to me as that young teenager all those years ago and yet, I was still haunted by his promise to return to collect on that favor.

"During Christmas of 2009, alone in my mother's apartment while she traveled, I found myself slipping into a deep depression and I was filled with despair. During the course of that year I had lost a job that I loved due to the economy, gone through a terrible break up with a man I could no longer love, I found out that my old friend who was with me in 1977 on that day with the 'old man in black' in Sunnyvale had died in 2008 from cancer and I had still not gotten over losing my beloved horse Meaghan, who had also died the year before, leaving me filled with a sorrow that I was not able to overcome.

"Starting on Christmas day I fasted and prayed for three days hoping that I could find some peace and comfort. It was then I realized that, I was indeed 'heartbroken' over my losses and suddenly the encounter with 'the old man in black' came flooding back into my mind and would not leave me alone. In trying to escape his words and his terrible messages to me, I began drinking heavily at night until I could find some peace in sleep. This would go on into the beginning of 2011 when I finally began to slowly recover from the pain. I finally thought I had come to terms with that old man’s warnings and I successfully quit drinking, my attitude shifted and I was now looking forward to a great new year.

"In April of last year [Nick's note: 2011] I discovered a lump in my breast and was at first unconcerned about it, I thought that it was probably a just a fibroid cyst that would go away on its own. I put off having it checked out until July when the lump had grown quite large and when the results came back positive for cancer I was shocked. Last month after trying a lot of alternative therapies in the prior months since July, I had a mastectomy. The pathology indicates that I have advanced stage cancer and once again the 'old man in black' and his words are haunting me. Oddly I find myself both eager and apprehensive as I await his return, but know that above all, I am no longer afraid."

In other words, the email she sent me was subtly different to the one which I received. To this day, I have not been able to explain how such an odd, and somewhat unsettling, change should have been made to Terry's text. The bigger questions, of course, are: (a) who was responsible for making the change? and (b) why?

Orcas Are Increasing Their Attacks on Alaskan Fishing Boats