“With the passage of more than 50 years since my incident in Minot and 70 years since the incident in Roswell, NM, there can be no ethical, moral or critical reason to keep the secret of humanity any longer and my other colleagues agree thereby.”

Here’s another one of those old-is-news-again stories that keeps people suspicious of what governments may be hiding about UFOs. On December 6, 1966, the Minot Daily News in Minot, North Dakota, carried a front page story about recent UFO sightings in the area, especially around the Minot Air Force Base, home of a number of nuclear missiles poised to be launched if the Cold War heated up. That story is back on the front page again 50 years later with the release of It Never Happened, Volume 1, a tell-mostly-all-before-I-die memoir of the incident by Captain David D Schindele, a Minuteman I intercontinental ballistic missile launch crew commander at the base on that day. Schindele claims that nothing more was reported about the UFO sightings because the Air Force ordered everyone there to never in their lives speak about what happened next … the unexplained change in status of 10 ICBMs to ‘off-alert’ – meaning that they could not be launched. 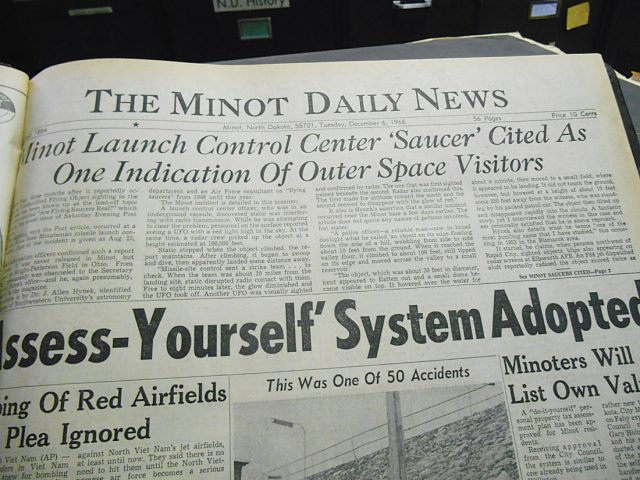 Schindele kept silent until 2010, when he first revealed his experiences to Robert Hastings, author of UFOs & Nukes: Extraordinary Encounters at Nuclear Weapons Sites. Why did Schindele finally disobey that order?

“During that time in Minot, many of us experienced unworldly incidents at Minuteman facilities but we were all individually instructed to keep silent. We never realized at the time that others among us were also experiencing incidents, but now the truth is becoming known. About 35 years after my Minot incident and learning about an identical incident experienced by another missileer (Capt. Robert Salas) connected to Malmstrom AFB in Montana, which was during the same general timeframe as my incident, I then contemplated coming forth with the ‘truth’.”

These old “missileers” liked to get together to reminisce and commiserate and it seems that Schindele and Salas discovered they had something more than their service time in common. Schindele found additional officers from the base who would admit that they were individually ordered “to keep our ‘lips zipped’” but many took the secret to their graves and more refuse to disobey the order to this day.

This is ‘old news’ in that there have been many reports of UFOs at nuclear missile sights and nuclear plants around the world, ranging from UFO activity at the plant where plutonium was processed for the first atomic bomb to UFO sightings at nuclear plants in France to documents from Russia indicating similar unexplained missile shutdowns in the Soviet Union after UFO sightings.

It’s ‘new news’ that eyewitness David Schindele put his experiences in a book and, as the title indicates, has more to tell. Is he doing it for the money?

“From the beginning, I’ve been conflicted with the goal of bringing truth to as many people as possible, while having no appetite for bringing attention to myself or receiving monetary benefit. But I also realize the fallacy in that.”

Schindele says he will donate proceeds from the book to the Seattle Chapter of the Air Force Association where he still meets with fellow veterans.

Are the claims in the book true? If so, will the government release any supporting documents or will the book suddenly go ‘off-alert’ too?