Astral Sex is the Latest Thing in Out-of-Body Experiences

For most people, having sex is an out-of-clothing experience. Once that thrill is gone, many couples try putting some articles of clothing back on to enhance the mood because you can’t get more than naked … can you? Astral projection specialist Steve G. Jones says you can and he’s promoting stripping off your physical beings and having out-of-body sex. It’s safer than actual sex and cheaper than virtual sex. Sounds like fun, but is it legal in all 50 states?

"You both get into your astral bodies and move together."

In a recent interview, Jones focuses primarily on two people leaving their bodies to enter the astral plane and become intimate with each other’s souls. No foreplay is required. In fact, that pre-sex time should be spent getting into a meditative state somewhere in that sweet spot between awake and asleep. Once that’s done, it’s a simple matter of sitting up, entering the plane and meeting up with your astral partner.

"You find that you can become much more intertwined in the astral body than you can in the physical body." 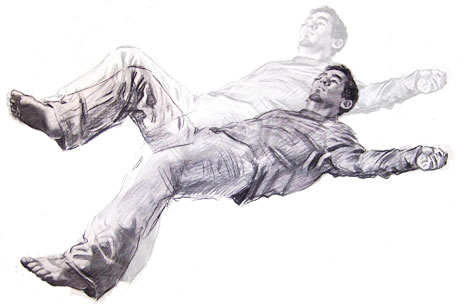 That intertwining depends on how adept you and your partner are at astral projection. The merging of souls or energy is the ‘orgasm’ that is reportedly a combination of both physical and astral pleasure that is said can still be felt after each person returns to their physical bodies.

This all sounds great if you have a partner, but there’s a creepy side of astral sex. Proponents say that one can travel out-of-body to a person who’s still in their body and sometimes merge energies while they‘re asleep. In the best case, that person may later mention that they had a dream about sex with the other. In the worst case, this is probably illegal in many southern and psychic states. Astral experts advise getting the permission of the person you’d like to astrally visit and perhaps the suggestion might help them go astral too.

Then there’s the demons. Some believe that the astral plane is not just inhabited by souls heading for hookups but also by demons and other evil entities intent on doing the same thing … or worse. At that point, it’s a good idea to contact an astral projection specialist like Steve Jones for guidance on how to deal with the entity and protect yourself from astral rape. Good luck trying to get a cop or a judge to believe that one.

Of course, Steve Jones and other astral projectionists promote the positive aspects of out-of-body sex … bliss, no hotel and no pregnancy. Oh, and no need for Netflix.